The Headwall on November 9, 2017. The Sound and The Fury is left-center. (Photo: Nick Bullock)

Home to a number of the Rockies’ best-known ice and mixed routes, the Stanley Headwall is a truly spectacular venue. Joe Josephson’s guide says it best: “Every major route on the wall is sustained, technically difficult, and contains sections of serious climbing.” (mountainproject.com)  Our own Bayard Russell brings his northeast climbing skills to the big mountains of B.C.
“It was great to see a world class climber like Raphael, from 2500 miles away, strap it onto an engineering project like this pitch, working out the gear the same way a local like McCormick, Doucette or Mahoney might on some temporary dribble, sporting a bloated rack of trinkets and taking the time needed to get them in. Same rack , same tempo, different place.”
– Bayard Russell

Raphael Slawinski on The Sound and the Fury. (Photo: Bayard Russell)

The Sound and the Fury is a rare former on the Stanley Headwall reminiscent of an early season route you might find in miniature at Cathedral, Frankenstein or Poke-O.

Read about the ascent in Nick Bullock’s crafted words with more photos and videos here: Escaping the Alligator

“The three of us stood beneath a line of ice. The word ‘line’ suggests continuous, and the ‘line’ we now stood was anything but! This ‘line’ was disjointed islands, feeble daggers, and frozen blossoms crawling insidiously down from the snow field ninety metres above. This did not look to be a ‘line’ or a climb that I would choose to warm into winter.” – Nick Bullock
Pitch 1 of the Sound and the Fury, 2004 route first climbed by Jeff Relph, Paul McSorley and Tom Gruber and graded WI 6 M7, according to a report on gravsports.com 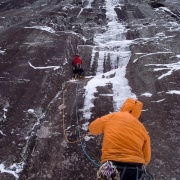