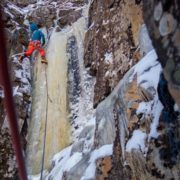 An October ascent of the Black Dike is rare, but it is just as rare to find a good balance in your life. Family, work and following your passions. The Doucette / Burhardt family is right on track. After a late night speaking event and the morning logistics of two young children, Peter and Majka still managed to pull off the coveted first ascent of the Black Dike this season. A 10am start “delivered the goods” for them. Another experienced party with an earlier start, backed off the climb that morning. The Black Dike is not in by normal standards and the little window that was there has passed. The ascent is a testament to their ability and balance in their lives.

Find out more on Majka from her website www.majkaburhardt.com/

Peter Doucette and Keith Sidle found just enough winter on Cannon cliff today to climb “The Black Dike”. They found thin, wet and bonded ice with just enough gear to get up the climb. Peter always seems to be in the right place, at the right time. October ascents are so sweet. Great work guys!

This is believed to be the first ascent of the season, and Pinnacle was climbed yesterday. Let the games begin! 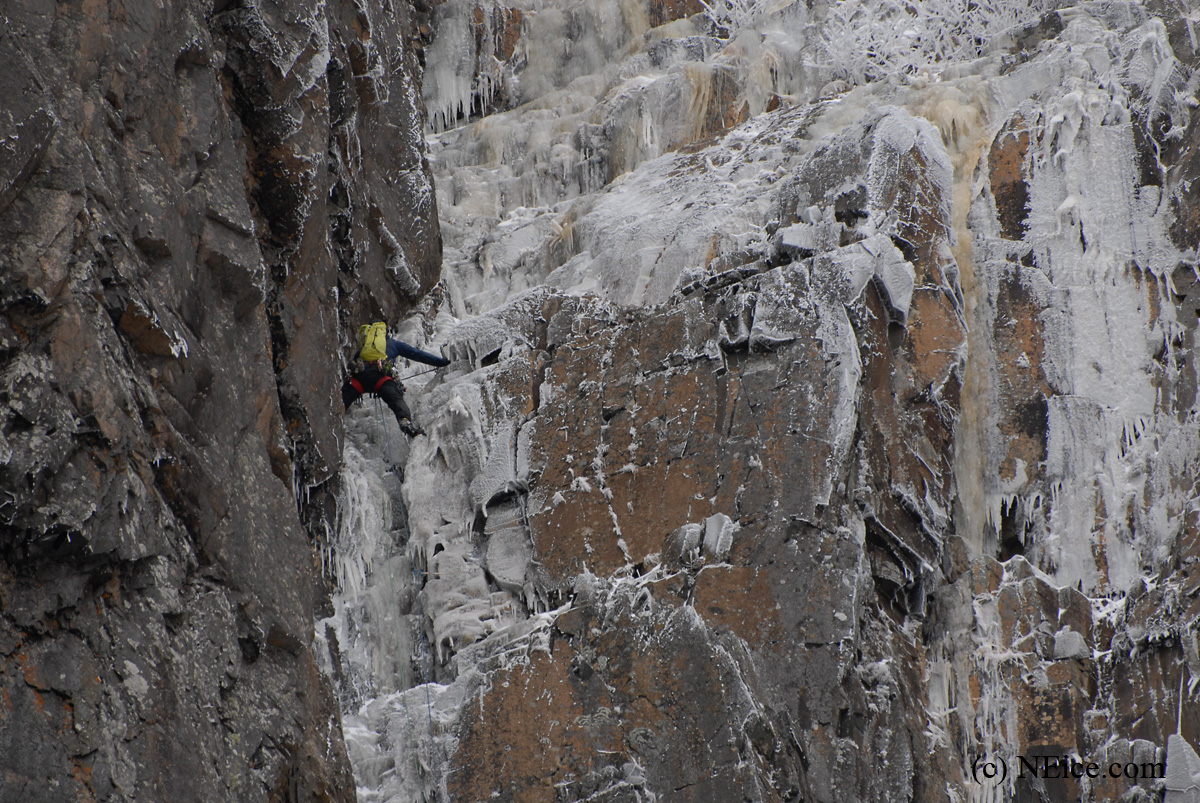 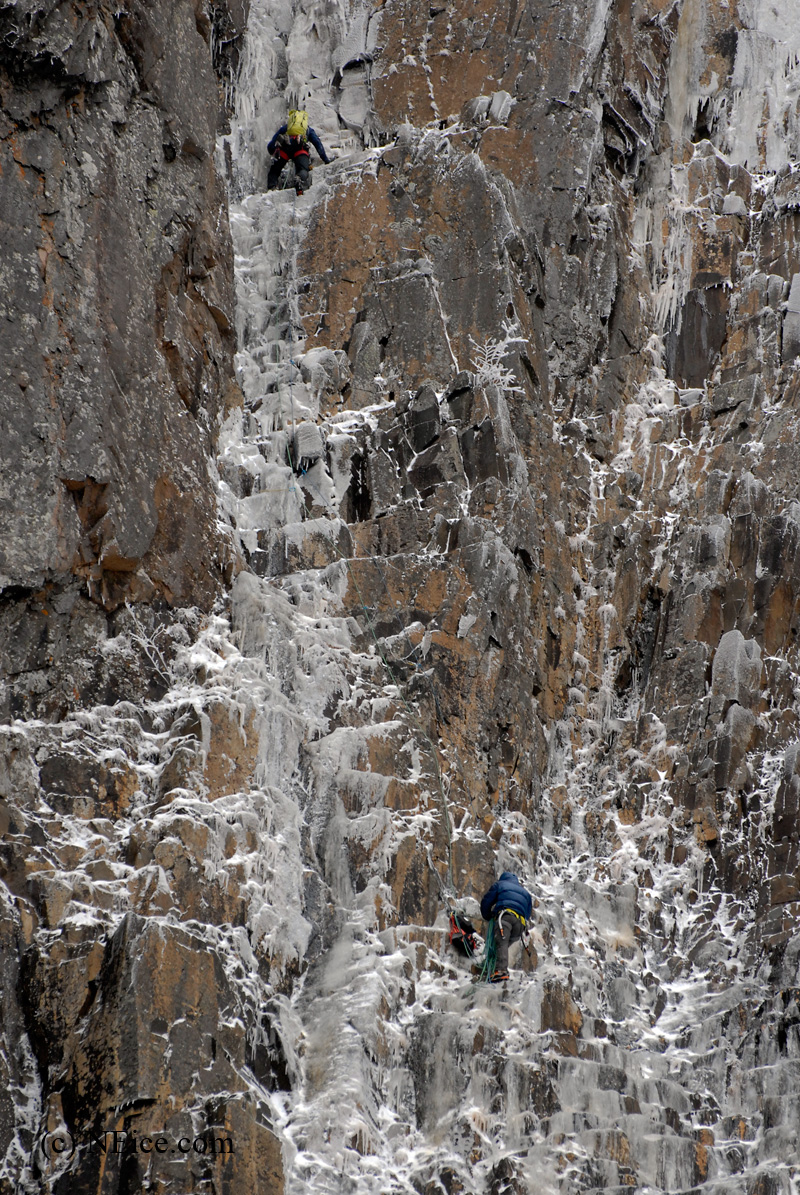 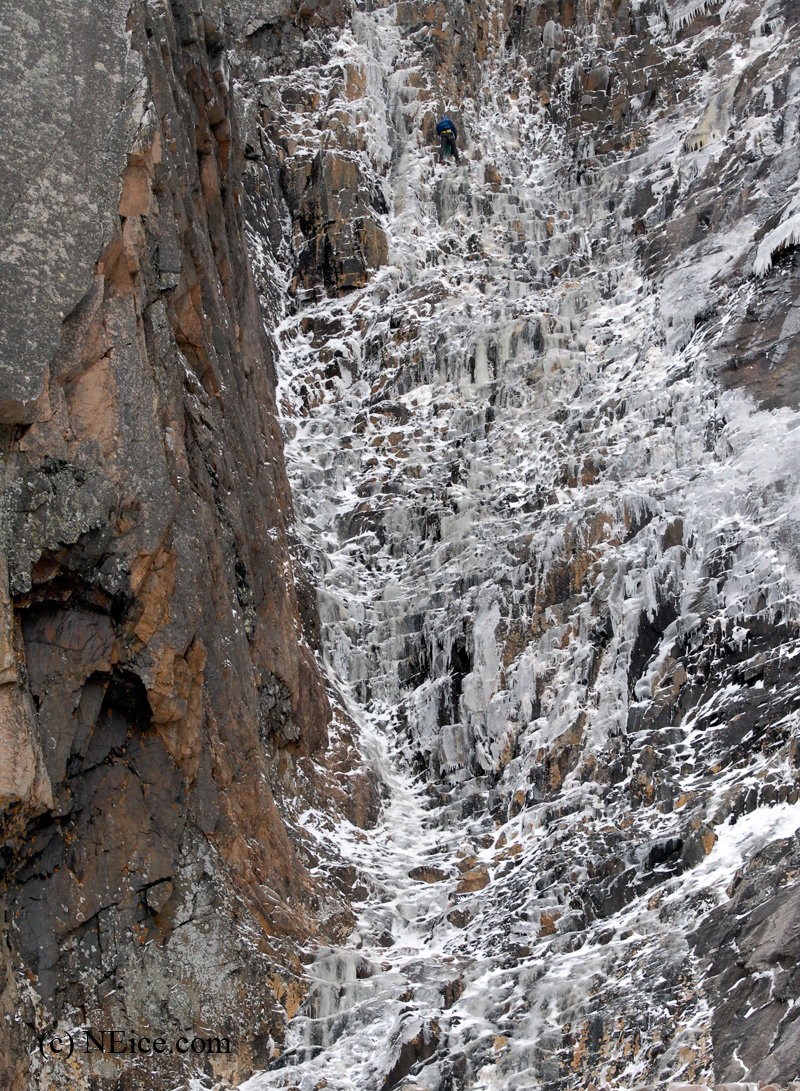 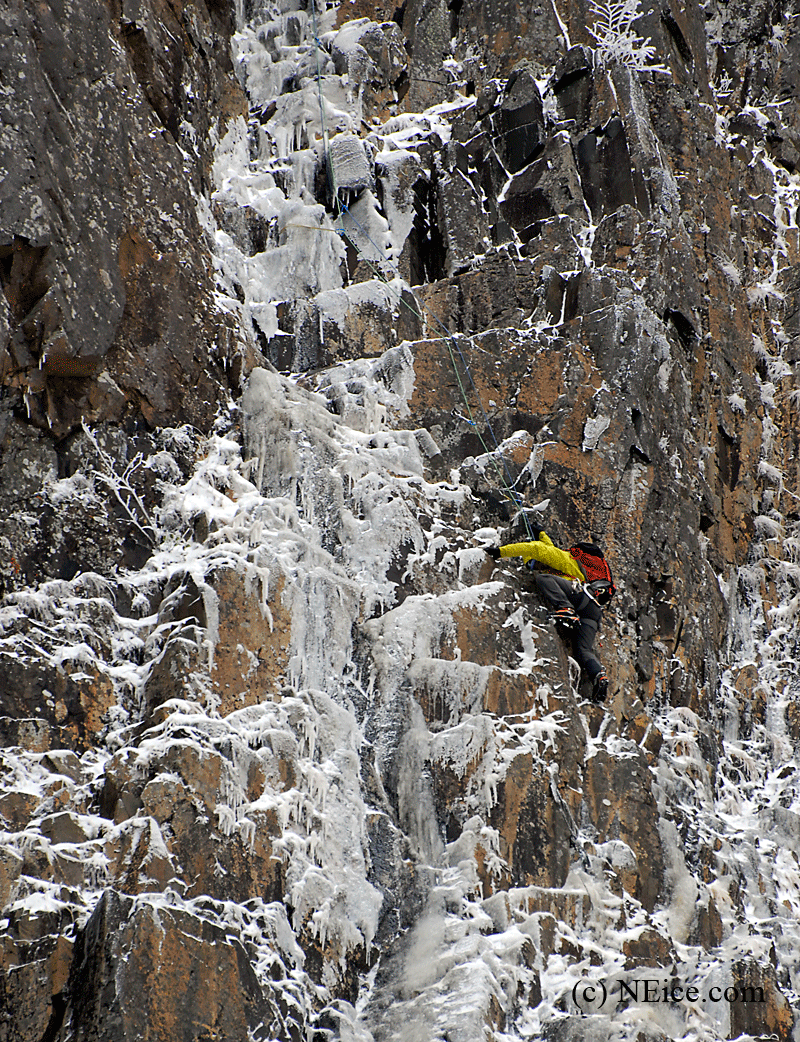 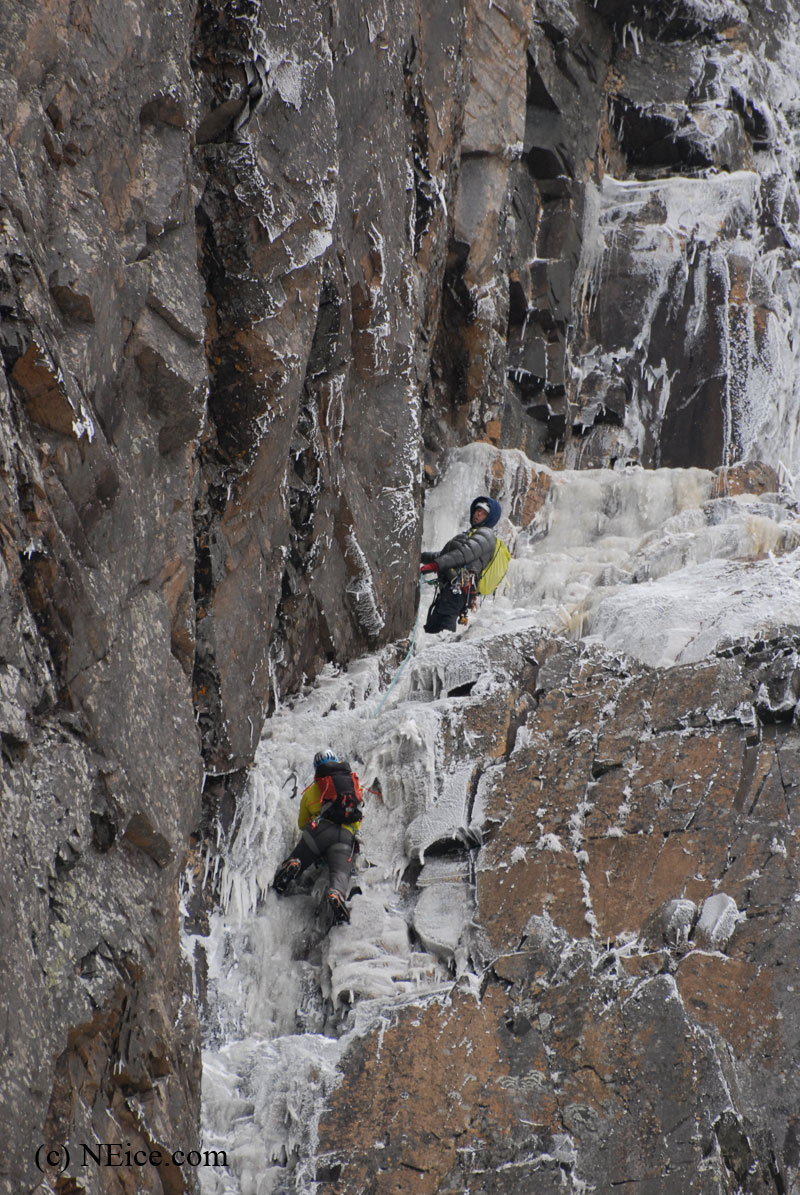 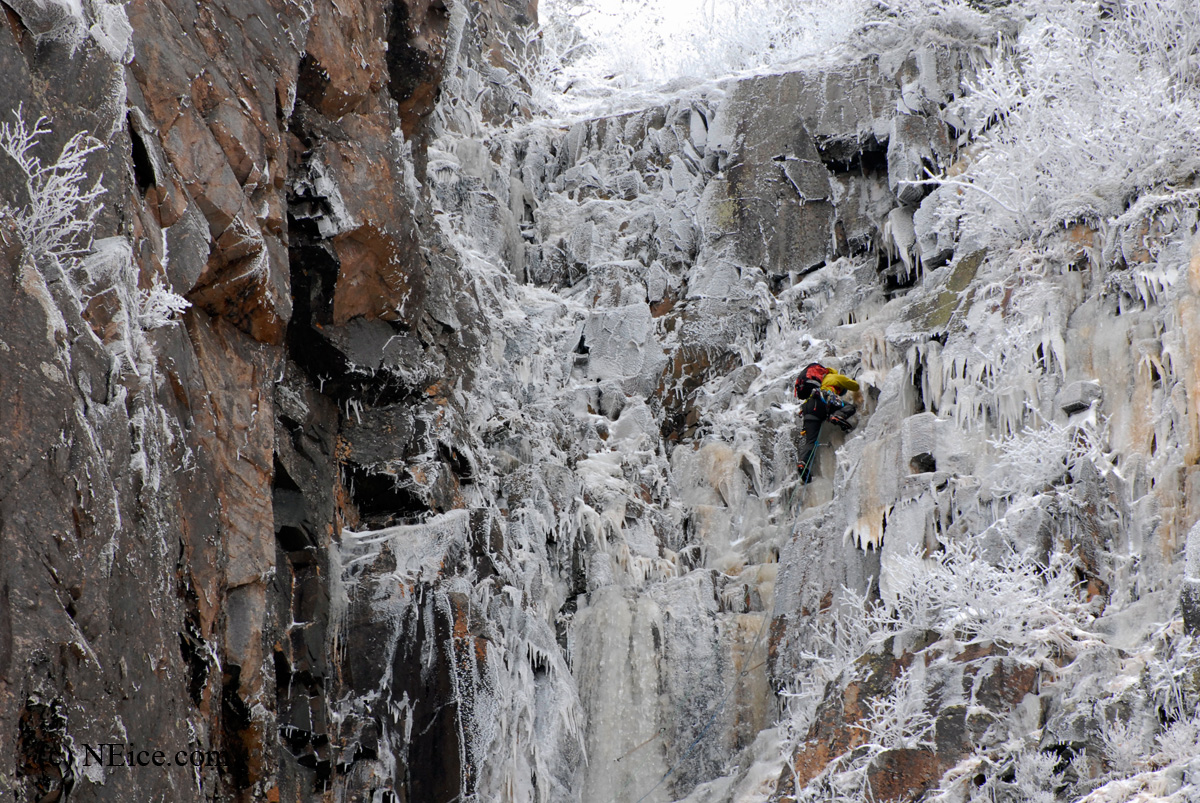 More on Peter Doucette, and The Black Dike

The first ascent of the Black Dike on Cannon Cliff each year has always been the herald of the new ice season.  This year, it came early and swift!

Yesterday morning, Majka Burhardt and Alexa Siegel worked their way up the route in lean and mean conditions, providing high-quality early ice season stoke.  Burhardt led the route and the two were back in the sun at the parking lot at 1:00 pm after a dozen good ice sticks, 40 times that of thin sticks and mixed moves, and two bouts of screaming barfies over three pitches (a piece). 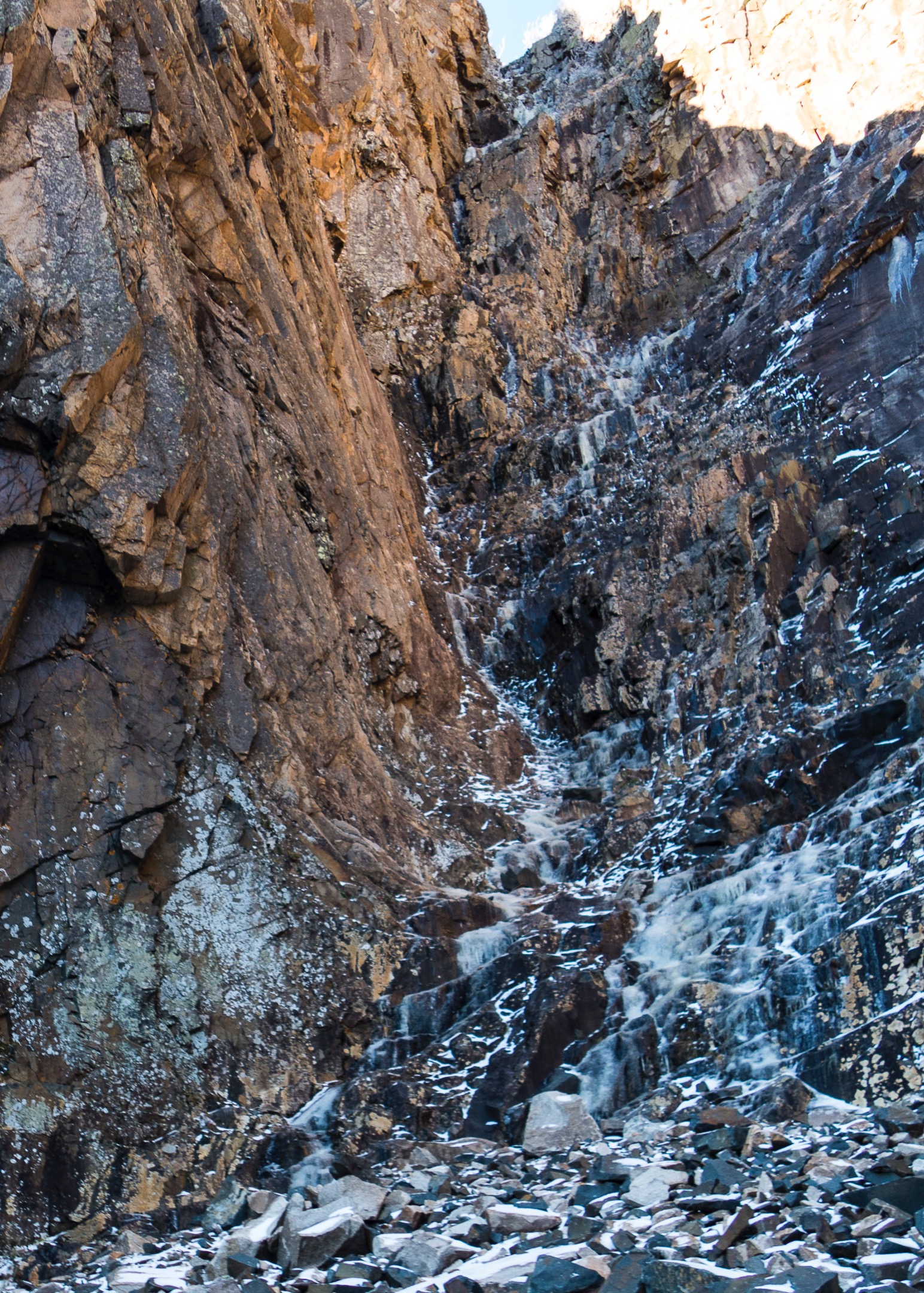 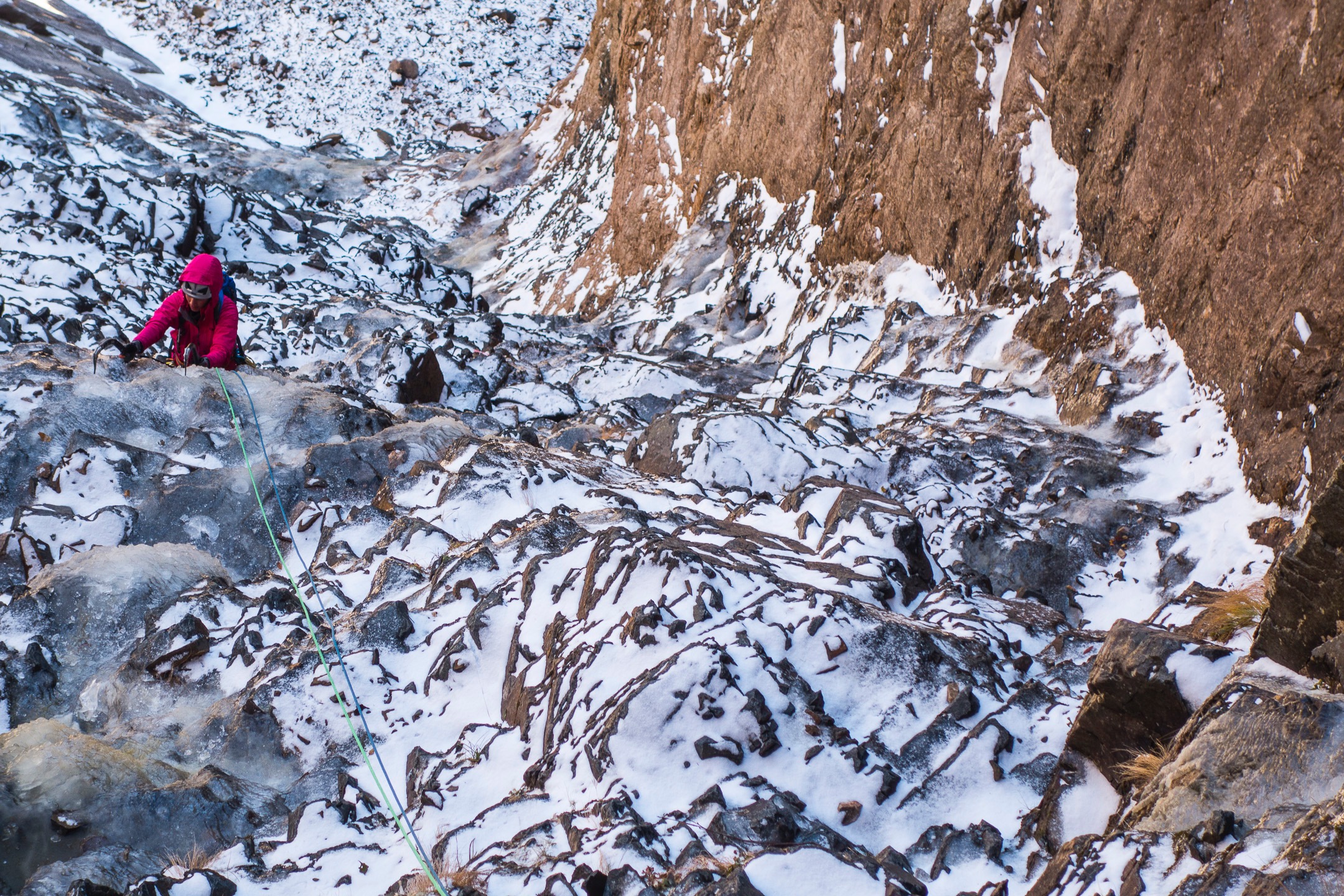 Alexa follows the thin but in the first pitch. Photo by Majka Burhardt. 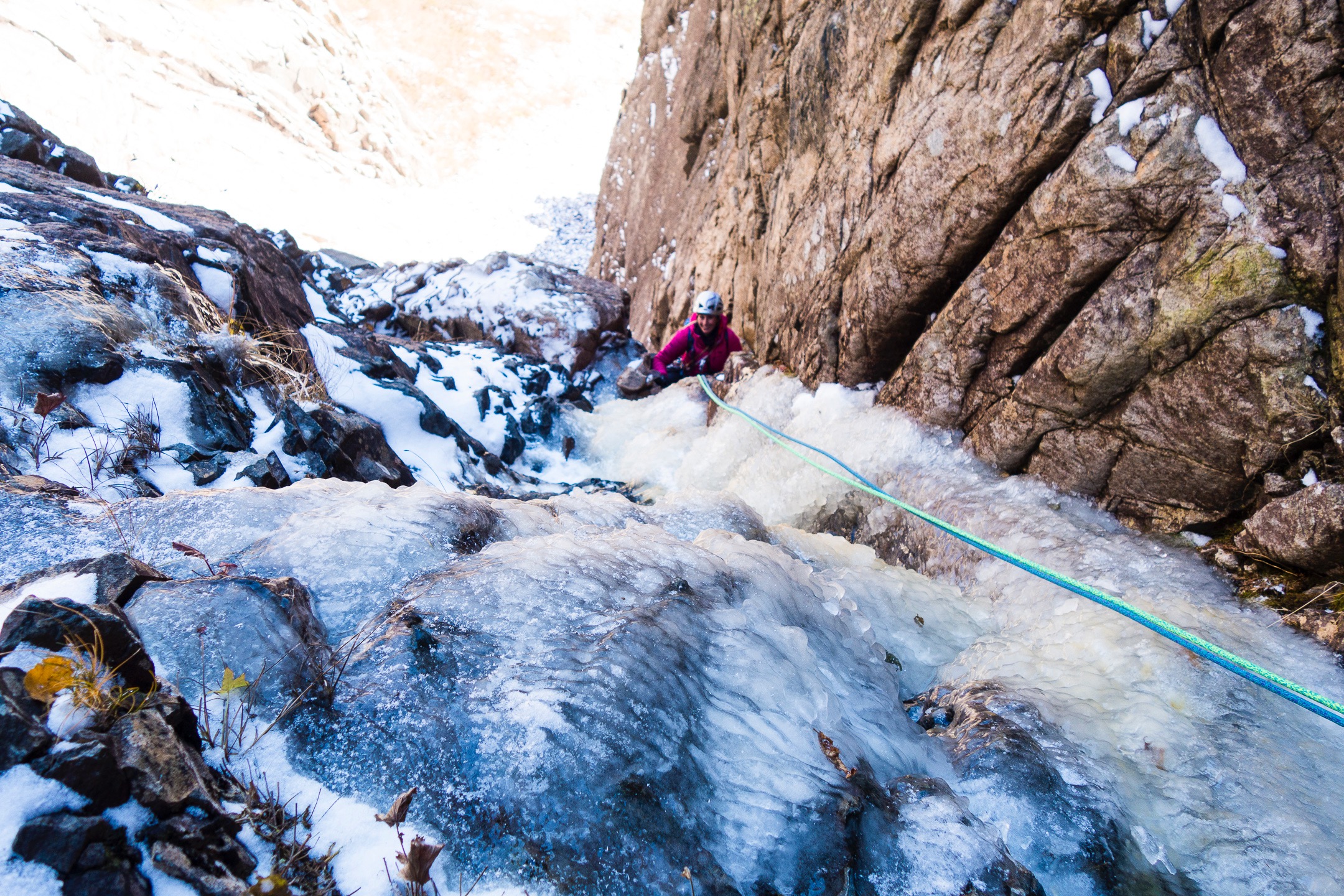 Pitch two was dry on the traverse, a bit of everything in the hose, and sticks up top. Alexa finishes it off. Photo by Majka Burhardt. 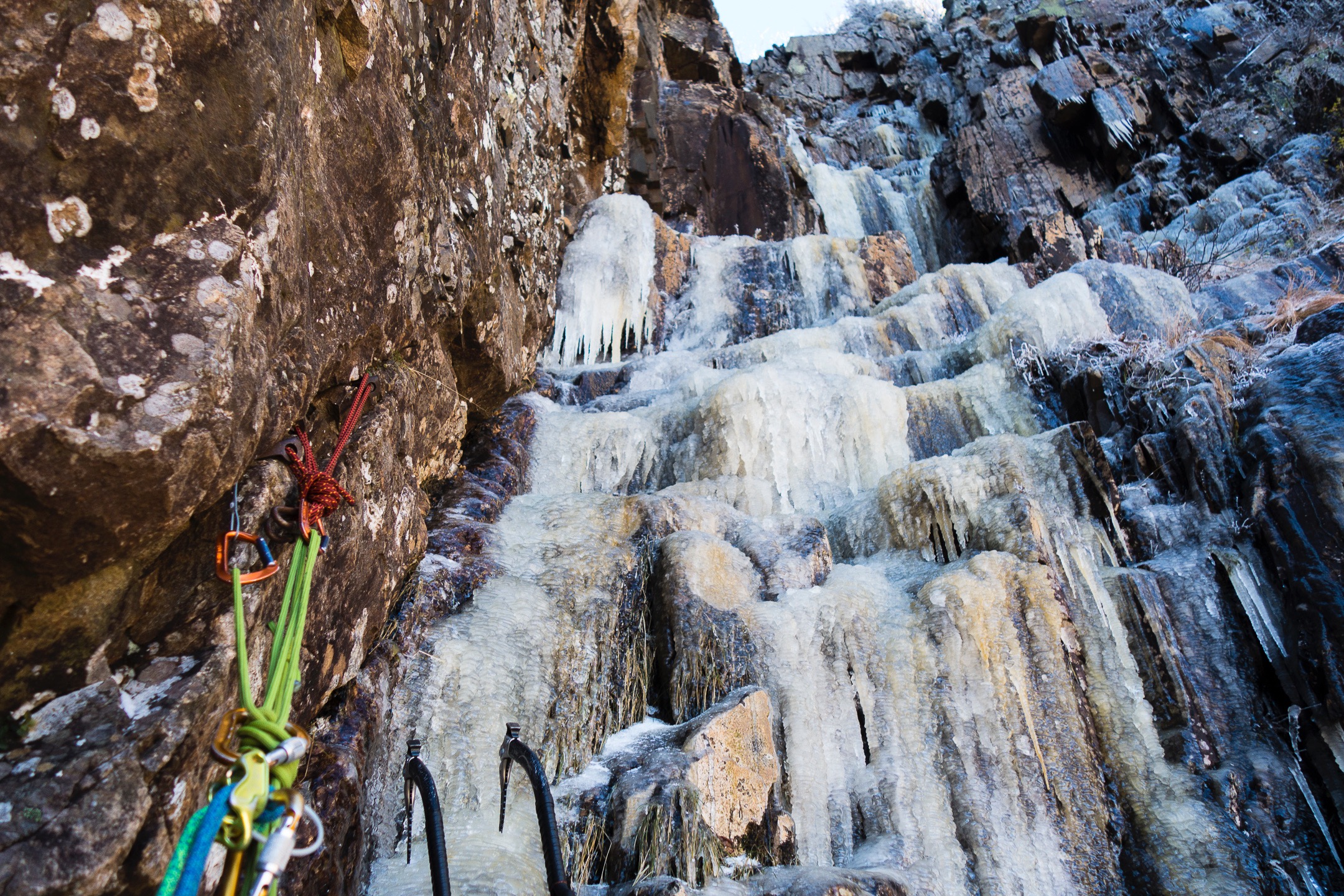 Looking up the final pitch— which (surprisingly) gave the most thoughtful climbing of the three. Photo by Majka Burhardt. 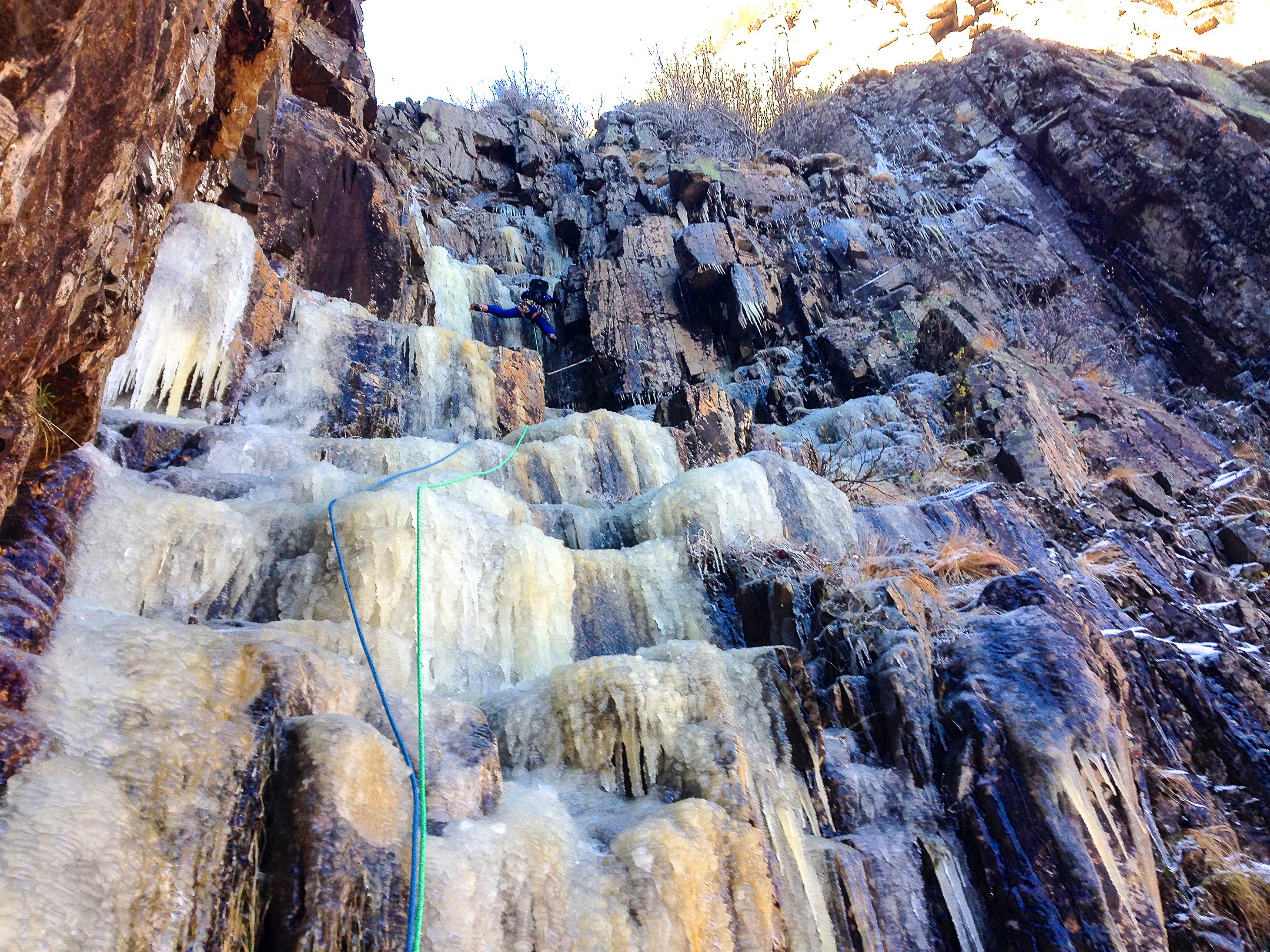 “Ice season is ON— don’t let anyone tell you otherwise.” – Majka Burhardt 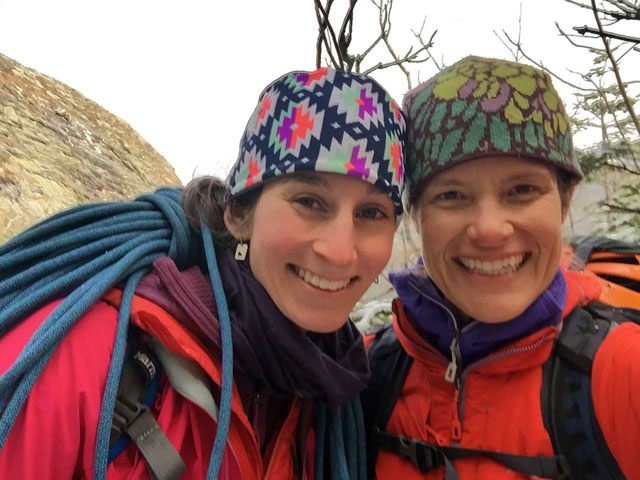 Majka Burhardt is an author, professional climber, filmmaker, and the founder/director at Additive Adventure. She is an ambassador/athlete for Patagonia, Osprey Packs, Positive Tracks, Petzl, Scarpa, and Julbo and an American Mountain Guides Association Certified Rock Guide.

It begins each year with the first frost. Around the time the calendar flips to October, I find myself sneaking glances at the high peaks forecast and pulling out my screamers. Rock season is still in full swing, but I start calling a few ice partners to sort out schedules. Three days, we tell each other, it only takes three days of freezing temperatures.

The calls go out to limited people — a devoted cadre of climbers with a passion for the unofficial opening act of ice season, the seasonal first ascent of the Black Dike. Ryan Stefiuk, Michael Wejchert, Peter Doucette, Elliot Gaddy — all strong climbers, all solid partners, who become competitors and co-conspirators as we all jockey to be the first to reach the top.

Three days (and more importantly, nights) can transform the rotten, black chimney on Cannon Cliff into the most famous ice climb in the North East, and we all know it. The Dike in early season fully lives up to its reputation. Every member of this team of rivals knows what they are in for. The first pitch will be covered in half-an-inch of ice. An eggshell-like layer covers the rock, and often the only gear is a cam less than halfway up. The next pitch is scratchy chimney climbing with only a handful of ice sticks, all of them thin. Launching off the belay is still the crux, but unlike mid-winter you never get the respite of a buried pick. The third pitch may or may not have enough ice to keep it safe. Some years there won’t be a screw placement on the entire route. Even in good years 10cm is as good as you’ll get.

Every year is a reaffirmation. Thin, terrifying sticks have a reassuring way of letting you know THIS ISN’T SPORT CLIMBING. It is winter again. Time to get ready, ice season is here.

This year the starting gun fired on Election Day. Ryan drove three hours to meet me, and we found eight screw placements, several of them solid. Michael was close on our heels the next day — he soloed and rope-soloed his way to the top before driving to Mount Washington and climbing Damnation. Two days later he and Ryan tried Fafnir but found it lacking.

Last year Peter and I found extremely thin ice days before Halloween. We left the parking lot at 5 a.m. and were back down by 10 a.m. Two days later Elliot and Michael found sections barely frozen in place. Two years ago Ryan and Michael made the first ascent, and a day later the three of us gave Fafnir a try. Four years ago Ryan and I stood atop Cannon first.

This tradition isn’t a race. Any one of us would happily join any other team member for opening day. It’s about extending the season, it’s about sucking the marrow out of winter, and it’s about ticking the Black Dike when its ripe. In October or November the Dike is an alpine nightmare, and climbing it required every ounce of skill and concentration. After a long summer of clipping bolts and whipping out of cracks, mixed climbing above tenuous gear is a wakeup call. The Dike is a cold reminder of why we love the sport, and each year it demands you get your head in the game. There is no option to lower off, no yelling “Take!”

Every one of us will likely climb the Dike later in the season, maybe with a client or friend in tow, but we migrate to Cannon each fall because of what it offers. For one ascent each year the Black Dike represents the outer limits. It is the hardest ice climb in the North East again, if only for a few days. It serves as a reintroduction to the sport, and each year we clamor over each other for the chance to get reacquainted.

If you want to join the team start watching the weather next October. And if things look good make sure to give me a call. 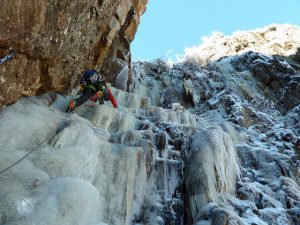 “Great conditions were found on the right exit today. Plenty of ice up there. The sun was cooking Fafnir and Quartet, which both have some ice on them.” – Ryan Stefiuk  – Big Foot Mountain Guides

The Black Dike (WI 4-5), Franconia notch NH is usually the first high-quality ice climb to come in and it usually happens this first week of November. We are off to a great start…lets hope it continues! 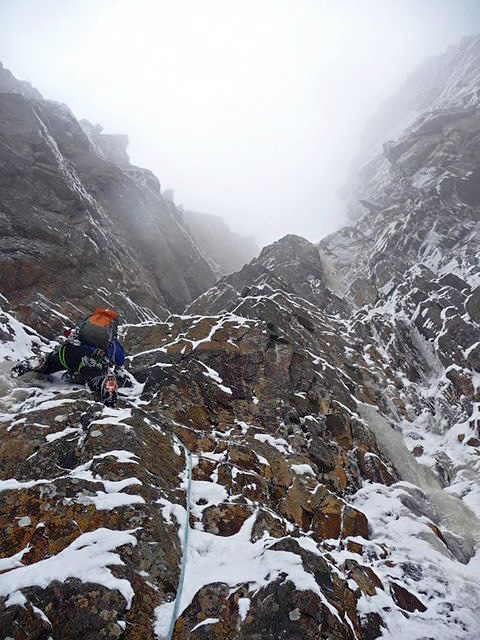 In normal years the Black Dike usually is fat by now. The first Ascents usually happen in the first week of November. Jim Shimburg has climbed it in early October. This is as late a start as I can remember….Doug