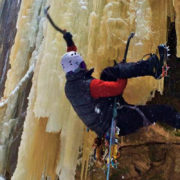 In the past two seasons, Bunnell has been quietly ticking off some of the region’s hard traditional classics and has been on a tear recently. 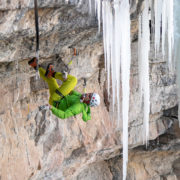 Tyler, where are you from?

I am from the small town of Carthage, New York.

How did you get into climbing?

I have always wanted to do it! But I really began climbing at Houghton College in 2012, where I graduated with a Bachelors of Science in Outdoor Recreation.

Olives. But, I feel like I should acquire their taste before I go on my trip to Italy.

Any snacks you just can’t avoid but know you should? 😊

I eat all the snacks and never look back. Ha,ha.

Any favorite tunes to get psyched for climbing?

Hip hop, rap, or heavy metal. I have been digging Wu Tang, Run the Jewels, Rage Against the Machine and Tool lately.

What is your favorite route in the Northeast?

What really motivates you to climb hard?

I am honestly mostly motivated by aesthetics and the love of movement. This love for difficult movement tends to encourage me to pursue hard ice and mixed climbing. And it seems most of the beautiful lines are either long ice smears or steep mixed lines that lead to an ice dagger. So I am motivated to climb hard out of necessity! haha

What person has had the biggest influence in your climbing?

Through inspiration; Ian Osteyee, Josh Warton, and Will Gadd.

You recently sent America’s hardest mixed route, Saphira, M15-, in Vail. Any tips on getting strong for mixed climbing?

My favorite way to train for big roof routes like Saphira, is with gymnastic rings. And big traversing routes also require a good deal of figure 4 training.

What are you using for gear these days?

Tools: CASSIN X-Dreams (aka the greatest tool ever made).

Soft goods: Psyched on NW Alpine! They are a small US based company that makes all of their products in Oregon. I try to wear as much of their product as I can to help support a great company. For gloves, I find that the CAMP Gecko Hot has been my all-time favorite for ice and mixed.

In 2017, I went to Ouray Ice Festival and watched the competition and from then on I knew I wanted to compete.  It looked so fun! Like America Ninja Warrior with ice tools. So I signed up for the 2018 Ouray Ice Fest Competition and finished in 5th place for the Men’s category right behind Will Gadd! I didn’t have any proper training and tried it “off the couch.” Then I thought, “What could I do if I actually trained?”

The American Alpine Club announced that the Ice Climbing World Cup Finals would be in Denver, only 30 minutes from where I currently live. A few of my friends applied to be on the team and we all began training together. This past August, my friends and I found ourselves driving down to Ouray just to go dry tooling.  The thought of dry tooling in the summer was funny to me, and it was my first time purely drytooling rather than ice or mixed climbing. But climbing and hanging out with the other competitors was such a great time, I decided to apply for the US team. I honestly just thought it would be a great opportunity to see the world!

As for the team, the US team is still very young.  There are a couple members that have competed for a few years, but it isn’t until this year that we have all come together to act as a team.  Kendra Stritch, the USA team manager, has been competing for 6 years and has been working with the American Alpine Club to help develop an actual US World Cup team. In years past, it was more like a few individuals representing the US on their own.

Through the persistence of a few team members, we are all really becoming a close-knit team! Our conversations are laced with inside jokes amidst the training and travel plans, and we all get along so well. It truly is a great group of people to help represent the US ice climbing community.

Was learning to ice climb in the Northeast instead of out West important in your skill set?

Yes.  In my opinion, the North East will prepare you for ice anywhere out West. But the ice out West won’t prepare you for the ice in the North East.  It’s the scrappy nature of the climbs, the tough weather conditions, and the raw amount of high-quality ice in the East. You can’t really get that skill set out here in Colorado. You can become a good dry-tooler for sure. But it would take much longer to become a good ice climber. Here the ice lines are farther apart from one another, there is avalanche danger, and the ice tends to have less water content. Yes we have places like Ouray, Bozeman and Cody. But they are somewhere between six and ten hours away from Boulder, Colorado. That type of drive would get you ANYWHERE out East.

Do you think it’s important for competitors to be able to ice climb?

Unfortunately, no. But for me, yes! I compete because it provides me the opportunity to travel to new places and experience ice in different regions of the world. Plus, ice climbing is my favorite form of climbing.

What’s your most excellent adventure(climbing trip) so far?

The first ascent of Conditional Love on Longs Peak. That route is so aesthetic, rare, and climbed so beautifully, that I climbed it 4 times this season!

What’s on your tick list?   – One northeastern route too, please. 😊

Goals this winter: Tick as many of the U.S. test-piece mixed climbs as possible and get in as much ice as possible. I also have a few big objectives that are pretty hush-hush.

Big goal out East: The Fecalator, an M10 trade route, in the Adirondacks. TOP of the list. It always has been. Plus, I have never ice climbed at Lake Willoughby or anywhere in New Hampshire. So my ticklist is HUGE for the Northeast.)

Big goal for drytooling: A Line Above the Sky, D15, in Italy.

Check out a video of Kempney on the F.A. of Conditional Love, WI5+, M5R, on Long’s Peak.