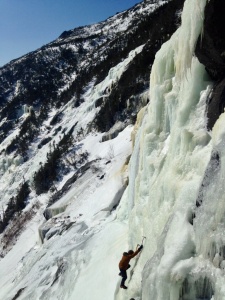 Ryan solos up some Grade IV ice in Madison Gulf. The first technical ice of the traverse

I pulled over on the side of the trail: a spot I usually stop with clients to enjoy a lunch break on the third day of Presidential traverses. The rain kept pouring down. We were soaked to the bone. I unzipped Justin’s jacket just a little bit, bent over, and heaved up 400 calories of salami, a liter of water, and the coffee I’d forced down four hours earlier. Ryan and Justin collapsed on their packs. I zipped the jacket back up and wiped my mouth.

“I don’t think I got puke on the jacket, Justin.” It was my first time climbing with him.

Killian Jornet isn’t likely to visit the White Mountains anytime soon. Nobody’s drawn to spruce traps, or short ice climbs, or knobby little summits with weird buildings on top. The terrain isn’t sexy, or long. New Englanders are really great at ice climbing, or climbing on granite, but we’re bad at long days in the mountains; if you want a long alpine day, you’ve got to get really creative. The trick lies in trying to do a lot with a little.

One day, while pouring over the ice-climbing guidebook, I came across Kurt Winkler and Doug Huntley’s “Link ‘em Up,” an enchainment of ice climbs in the Presidentials over three days. I was also deeply impressed with Alan Cattabriga and Gabe Flanders’ efforts to link three ice climbs with a full traverse, from Webster to Madison. 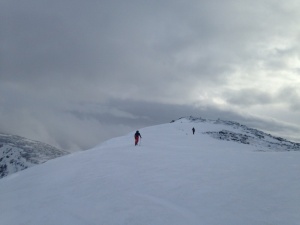 Justin and Ryan about to summit Mt. Clay

King Ravine, Mad Gulf, the Great Gulf, Huntington Ravine, and Tuckerman’s, all ravines with established climbs, in addition to the nine summits of a standard guided winter traverse: 5,000 feet of climbing or mountaineering, and 27 miles of hiking. I started calling it the “Technical Traverse.” It’d take three days; you’d need to carry a firstlight, a sleeping bag, and food. But then again, while trail running in the Tatra Mountains of Poland a few summers ago, I came across the account of Slovakian Dodo Kopold’s nonstop traverse of the Tatra Mountains, linking up climbs and summits; out went the bivy kit. You’d just need a stove to stay hydrated, a pair of ice tools, crampons, microspikes, (it’s New England), and a puffy jacket!

For three years, I dreamed about pulling off the traverse. Only in the spring, with good snow and perfect neve, would it be possible. Normally, the temptations of clipping bolts in the sun won out. But this year I tore the labrum in my right shoulder on a sport climb. I’d have to hold off on rock climbing until I got surgery, which I opted to do in the springtime. So I just ran a lot, sometimes logging forty to sixty trail-running miles a week. As I guided mountaineering courses and presidential traverses throughout the winter, I piled weight in my pack, often carrying upwards of 65-70 pounds for hours on end, and my legs transformed with that specific mountain endurance you can’t get from Crossfit or trendy stadium workouts.

The warm-up last week was heartbreaking for ice climbers and skiers, and for anyone concerned about our environment. It devastated our snowpack. I went from skiing fresh, perfect powder to guiding in the rain. But it also meant that, if it got cold, even briefly, the entire range would be coated in perfect alpine neve. There was a short window where the temperatures were slightly below freezing, and the wind was quiet enough to warrant speedy moving. Problem was, it would only last about twelve hours before turning to warm, freezing rain. But, if we finished our last climb, we could always suffer through a little rain for the last nine miles of easy walking.

We all felt nauseous as we crunched up the long, terrible slope. The second we reached the top, it began to rain
Ryan “Rhino” Driscoll is an old-school climber. He loves to suffer. The guy seeks out 5.11 slabs in the woods. He prefers scrappy mixed terrain over ice any day of the week. He wears fleece gloves. He doesn’t post or talk about his climbs. Justin Guarino, another local guide and Presidential suffer hog, decided to come as well. Both Ryan and Justin have done a lot of climbing in New Hampshire and had independently been thinking of a similar traverse. Three people meant better trail-breaking if it came to that, and it was nice to split up the weight of the stove. We brought lightweight ice tools. I took the hammer off a Quark and brought a 43 centimeter Sum’tec. I took the straps off my crampons. Rhino decided bringing a helmet was too much weight. We deliberated bringing tethers before deciding against them. With food and water, our packs weighed sixteen pounds each. For emergency gear, we had a Delorme InReach and an old Wild Things Bothy Bag made out of sil-nylon.

We started hiking at 7:15 a.m., figuring it’d be better to get a full night’s sleep than start super-early. We were in for plenty of night climbing, anyway. We forced ourselves to go slowly up the Valley Way trail, then dumped our packs to drop into Mad Gulf. It was potentially the cruxiest part of the day, but we raced down before the warm sun began melting the ice too much. The ice climbs in the Madison Gulf are awesome: perfect, warm sticks and a beautiful setting. We picked the one Kurt Winkler and Doug Huntley had done on their traverse—a great WI4 line. We trudged up corn snow and summited Madison. Four hours. Good. The sun beat down. We drank from ice melting off the roof of Madison hut, and continued on down into Great Gully in King’s Ravine. This was our easiest climb, and next time I’d opt for “PF Flyer,” something more difficult, though that climb requires bushwhacking that we didn’t have time for. More meltwater, a trudge back up the 600-800 feet or so, to summit Adams. We moved over Jefferson, down into Sphynx col, and spent an hour brewing up more water and eating. Nine hours in. We summited Clay, and dropped into the Great Gulf, and down-climbed perfect neve. We each picked a fun little mixed rib to climb up—the climbing was so much more enjoyable than the hiking, especially without packs. The terrain was classic, easy ravine climbing, with turf-shots, ice, neve, and little mixed bulges. We front-pointed back up to Clay and slogged up Washington. By now, fog was setting in, though it was still clear enough to see town sporadically.

At nightfall, we summited. “We are about to enter the Upside Down,” said Justin, quoting the Netflix show Stranger Things. As the darkness fell, our legs would feel a little more tired, and everything would feel a little bit harder. We down climbed Central Gully into Huntington Ravine, and started up Pinnacle. It was undermined, and actually kind of scary, especially after twelve hours of moving and having three people soloing at the same time. We carefully picked our way up so as not to break the old ice and fall into the waterfall below. 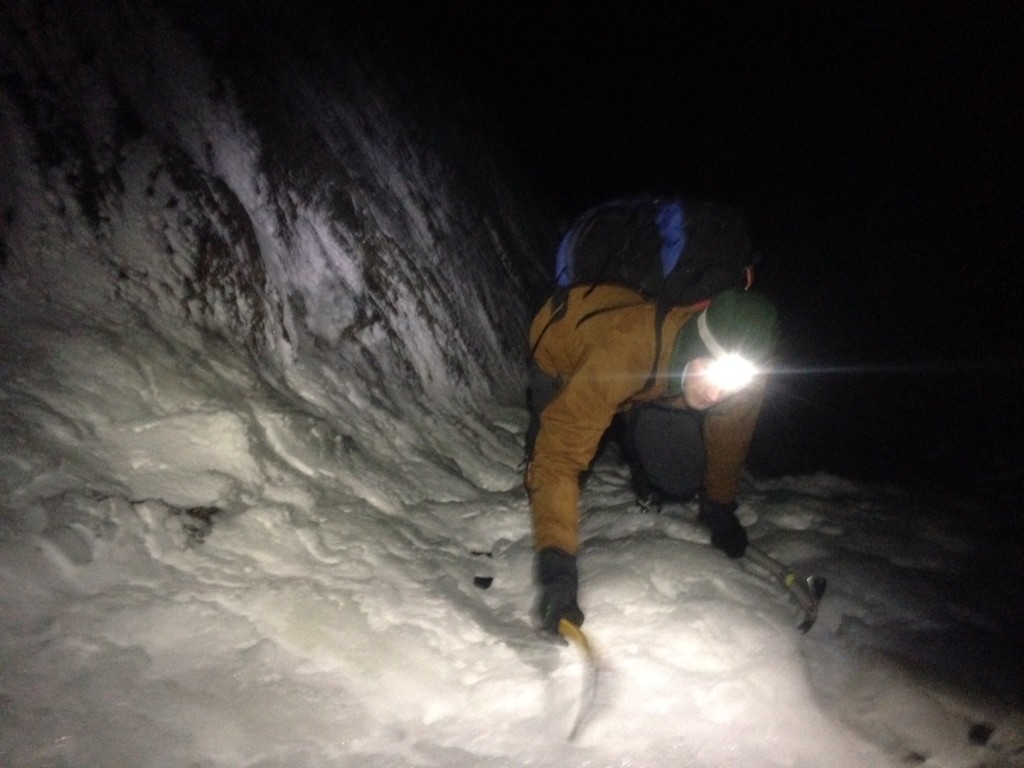 We texted our respective significant others to let them know we were alright, hiked across the Alpine Garden, and bailed into Right Gully in Tuckerman’s Ravine. Another brew stop, taking advantage of the running water by the Ranger Station. We had initially planned on climbing a mixed runnel up the Boott Spur, but we were so exhausted that simply climbing up Hillman’s Highway was good enough. It was ten o’clock. We all felt nauseous as we crunched up the long, terrible slope. The second we reached the top, it began to rain.

We’re in it now. I pulled the GPS out. We couldn’t see fifteen feet. The Upside Down. We’d always thought it’d be over the second we topped out Tuck’s – a victorious slog to the road. My GPS died as we reached Lakes, and we took a compass bearing from the sign. It took us nearly an hour to find the hut from 0.1 miles away. I’ve been there hundreds of times, more than that, in all sorts of weather, but I’ve never encountered fog like that. I headed in a general direction to reach Monroe, where the trail gets easier. I was completely soaked through in my Houdini Jacket and soft shell pants. The down puffy in my pack wouldn’t help much, either. We went from cairn to cairn. If I couldn’t find the trail, I’d yell “Stop!” and the Rhino would hold fast to the last cairn and we’d stretch out as far as we could see each other—a hundred feet or so, and sweep around. It got easier as we wove down the Crawford path, but each time we stopped, I’d start shivering uncontrollably. We were all pretty darn close to hypothermia.

“Michael,” said Justin. “When’s the last time you ate or drank?” He was right. Having three people was starting to seem like a good idea, if for nothing else besides a little bit of control. He gave me his synthetic jacket—a lifesaver. A slog with tired legs over Eisenhower and Pierce, some vomiting (I’m always the one to vomit), and then all we had to do was force ourselves down to the Highland Center. It got warmer in the trees, as the windy, sideways rain gave way to mist. We arrived at 3:30 a.m., twenty hours and fifteen minutes after starting. We’d done it! Ryan started to get excited, “You could do a hut-to-hut traverse with ice gear, and end on the Black Dike!” But, after driving back home, soaked to the bone, all I wanted to do was sleep. 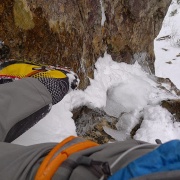 Unprecedented February in The Northeast