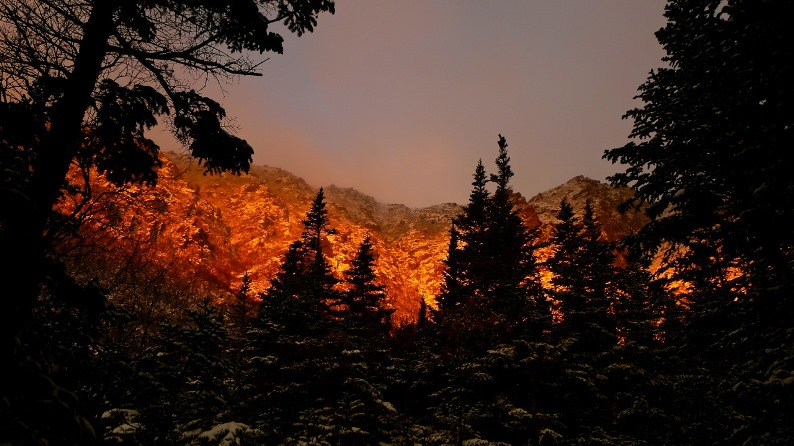 On the day of the Black Dike ascent on October 19th, I was in Huntington Ravine to scope out what, if anything, had formed after only two days of below freezing temperatures.  I chose a winding line up Yale Gully, avoiding the slab sections that had a coating of ice that was almost immeasurable to the human eye.  Thin runnels of ice over rocky grooves kept me engaged and deep snowy drifts clinging to the upper sections made for a great winter day in mid-October.  I wouldn’t say it was ‘first ice’ for me that day, but the adventure was well worth the effort. 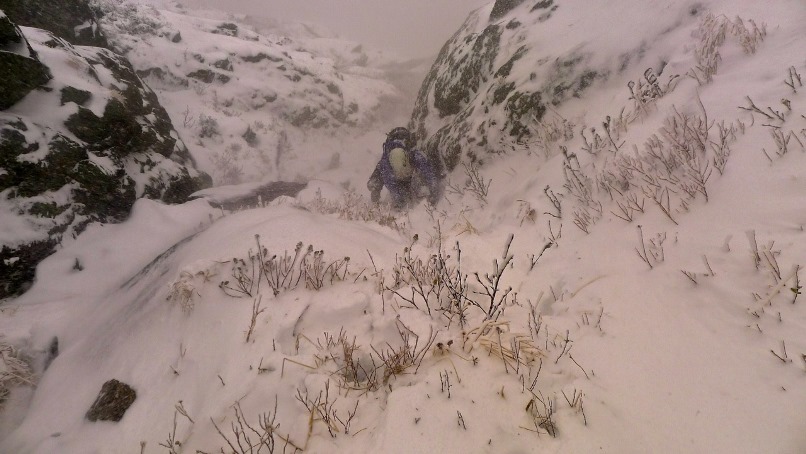 After that weekend, the brief shot of winter died off and the thermometer climbed back up.  For more than two weeks after, above average temperatures killed any hope for more ice.  Tools and spikes were sharpened and ready to go.  We all waited impatiently for that next cold spell.

Winter tried again to beat back this warm Autumn with another two days of bitterly cold weather and high winds this past Friday and Saturday.  And for those of us who went out on Sunday, we made that approach thinking it’s a 50/50 chance of climbable ice, at best.  Were we just a bunch of dedicated fools?  Perhaps.

I rolled the dice in King Ravine, usually a good early season bet.  Zac St. Jules walked alone into Huntington Ravine as Max Forbes with his team, Russell Frisch and Steve Rahr started their own approach into the ravine under windy skies and cold morning temperatures.  King Ravine was ready for me.  My first swing into the drainage ice of the Great Gully was thin but sticky.  Water was flowing underneath the ice, leaving a fountain at times where my pick had been.  The ice ranged from just thick enough to almost too thin for comfort but it was secure and a total blast to climb.  Above the ice, the snow began filling in the upper portion of the gully.  Solid winter conditions greeted me at the top and underfoot I crushed thousands of rime ice feathers. 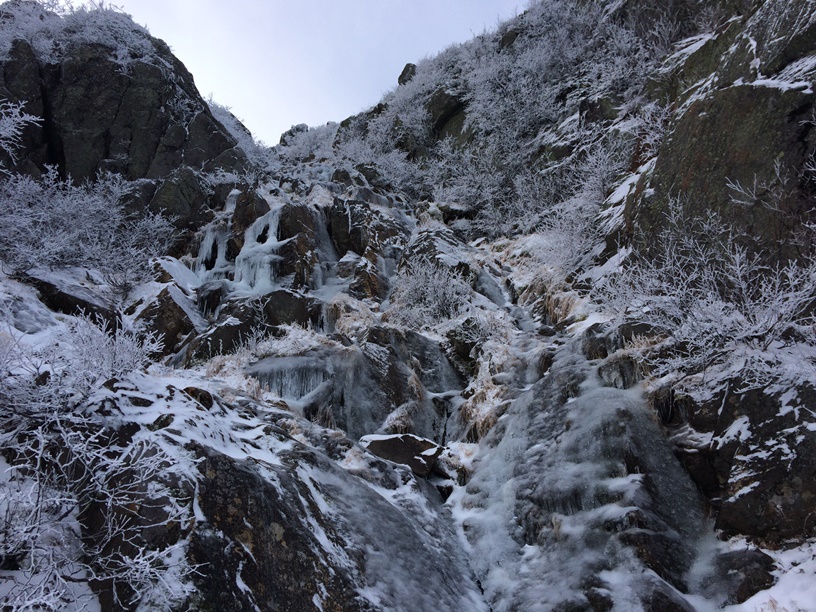 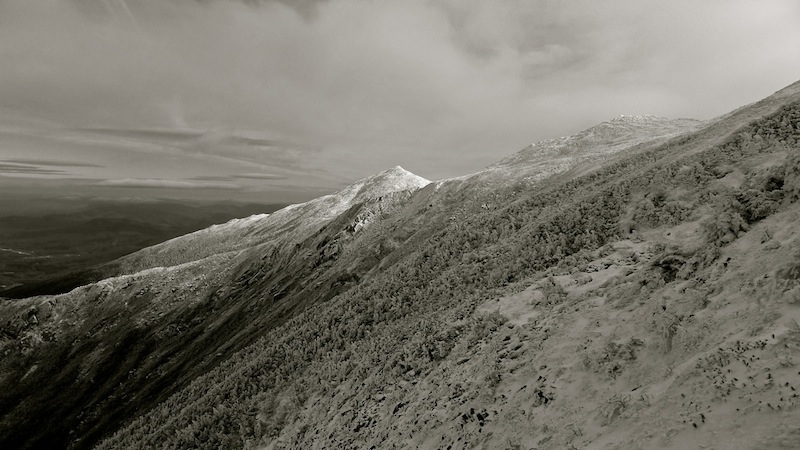 The top of King Ravine., looking toward Mt. Madison. 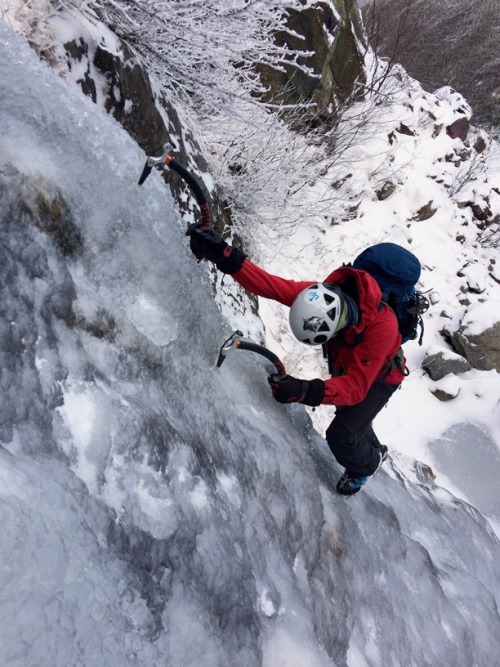 Starting up the first ice.

Meanwhile in Huntington Ravine, the high winds were forcing Zac to fight through some nasty spray from the open sections of running water midway up Pinnacle Gully.  At the base of the climb, the party of three were about to head up the committing mix climb above them. 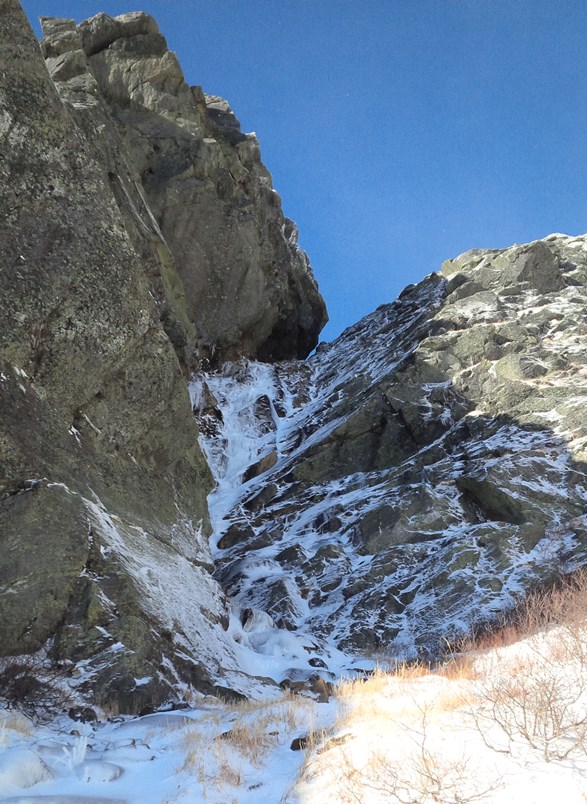 The first pitch was led by Russ Frisch, who placed two screws low and then quickly ran out of ice. Max Forbes took the next lead and  found himself having to cross a wide section of running water in the middle of the route.  He placed a knifeblade and began moving through the water course.  “Since there was not enough ice over the running water to support my weight, I bashed through it with my hammer exposing the running water and rock below. I stepped through the water and did a bit of a jump to get across to solid ground. I moved up a short ramp with 4 inches or so of relatively attached ice and moved up into a small corner to rest. I placed a .2 X4, one of the only solid pieces of the day, and then crossed back over the running water to reach the fixed anchor at the top of Pitch 2.” – Max Forbes 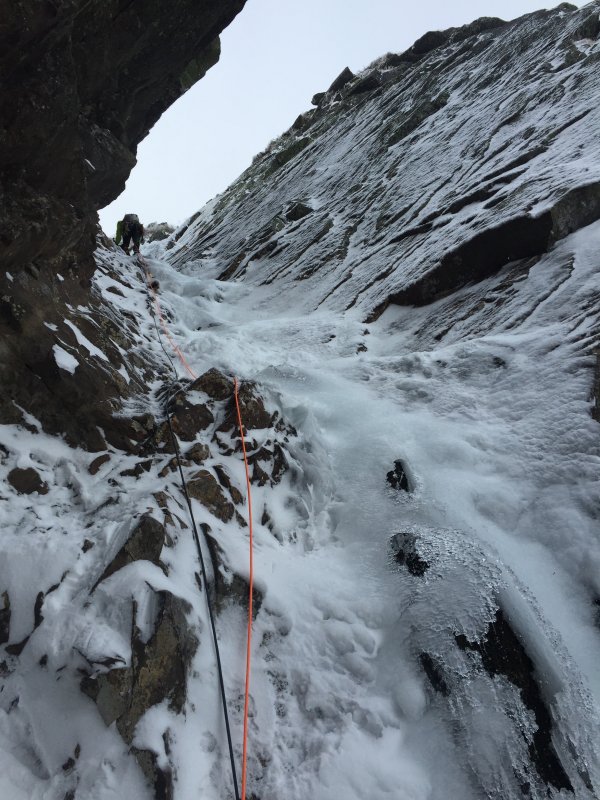 The last pitch was pretty moderate, exclusively mixed climbing with patches of ice and hard snow that provided a bit more comfortable stance.  More photos from the day here.

As for the rest of Huntington, Max reports:  “O’dells was filling well, and the first pitch looked climbable. Central looked full of mostly snow, some ice at the crux. Yale and Harvard bulges were in pretty fat, but the gullies above were not looking as good. The ice is definitely coming in though. North seemed to have filled in pretty quickly as well, but the start didn’t seem to be there. Hopefully it stays cold up there but it looks like conditions will hold and allow everything to continue to build.”

Twenty miles southwest of Mt. Washington, two more climbers were picking at the meager winter rations.  Noel Normandin and Ryan Ferry were perched high on the Black Dike, which was dishing out a 90% mix climb.  Noel describes the route:

While starting the third pitch, another party was spotted below.  Winter is finally getting a hold of the mountains!  Keep those metal bits sharpened!

New Hampshire isn’t the only place where ice is forming.  I bet some things are going down in NY and VT this week, if they haven’t already!

A wintry mix is forecasted for the higher summits on Friday night with blustery weather and snow moving in over the weekend, the ice season is well on its way!  Check out the weather page for more info!

Special Thanks to Zac St. Jules, Max Forbes and Noel Normandin for their photographs, video and additional words.

The KRONOS is HERE!