The First Ascent of Cryokinesis 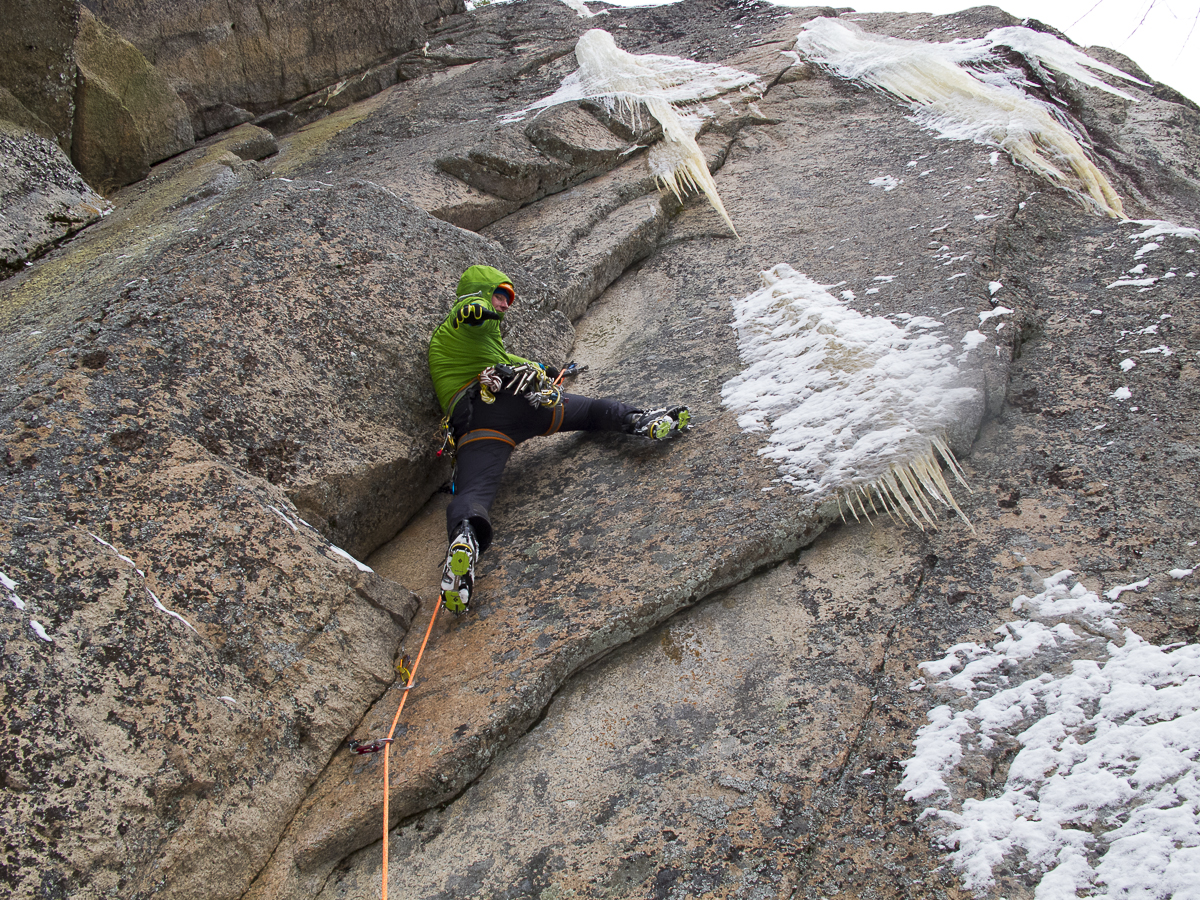 Peter Doucette shakes out and searches for the next edge, divot or dimple towards progress on this year’s first attempt of Cryokinesis. Photo: Ray Rice

Ray Rice’s airborne antics folded him nearly in half and brought him to a halt not so far above Cathedral Ledge’s Blueberry Terrace in January 2010. “Walking”, or “climbing it off”, as was the case, Ray leaned into a no hands rest 30+ feet below his highpoint. He collected himself and prepared for his second go before the adrenaline and whatever else was coursing through his veins dissipated. Later, Ray described the upper reaches of Cryokinesis as, “climbing blacked out.” He shed his gloves late in the lead as desperation returned.  He torqued, clung, quivered and willed his way upward, narrowly avoiding a second dangerous mistake. Either due to acute focus, or the pain his body was suppressing, his memory of the pitch was as sparse as the turf shots between him and topping out.

Ray’s belayer that day was Bayard Russell. Bayard simply laughed when I asked him recently what it was like belaying and watching Ray so unabashedly go for it.  As his laughter stopped, he said, “When Ray got back on, (and I had to send him my tools first, cause his had sailed to the ground) I was talking to the rope, trying to push it, and Ray, to the top from below. It was terrifying to think he could take that same fall again. He was just going for it.  At the end of the day, when we’d all reached the ground, we had to look for Ray’s tools. In the search, we found both, one having left a perfect tool silhouette punched in the snow further from the base of the cliff than you’d expect.” 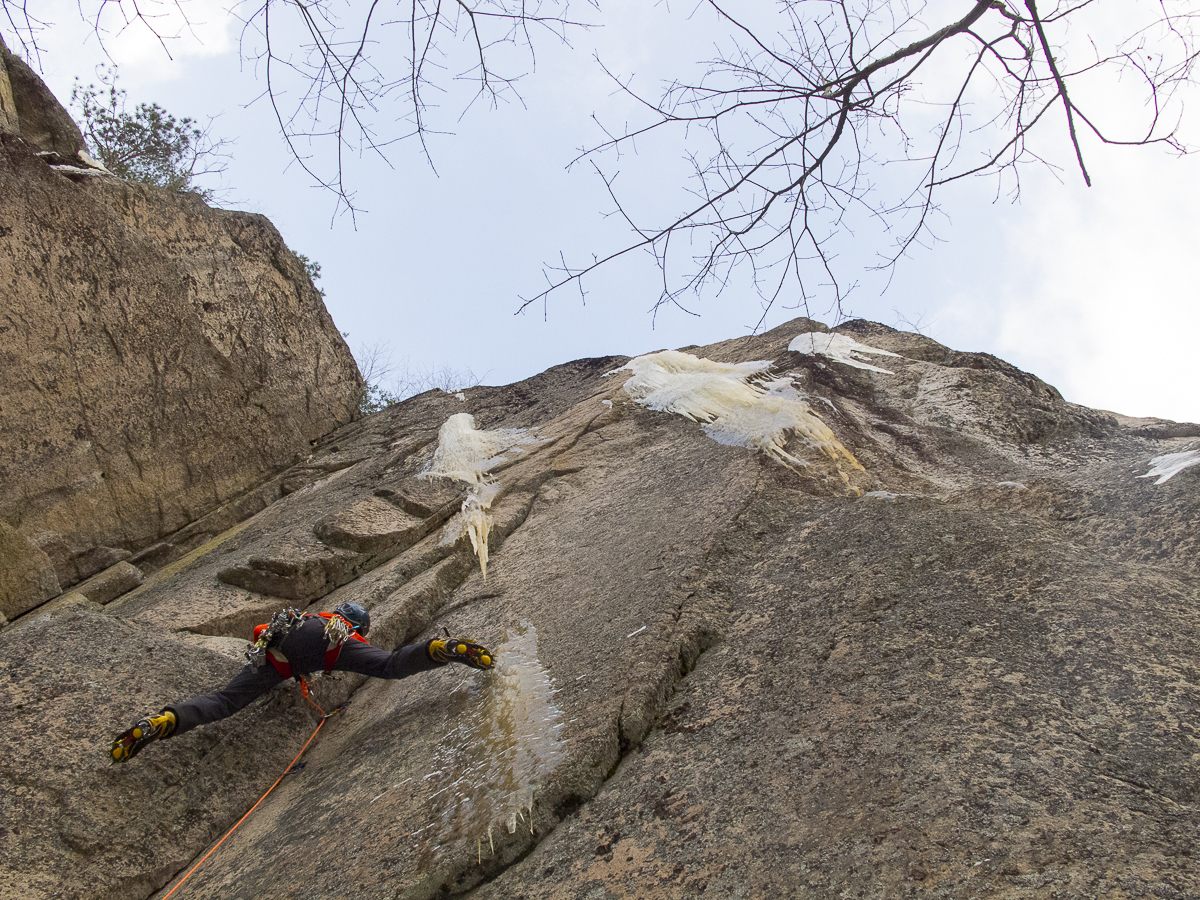 Ray Rice using all the ice he was given and maxing out the stem on the first ascent of Cryokinesis. Photo: Peter Doucette

As climbers, the top is only part of the goal. How we feel climbing, the style with which we approach objectives, choose partners, remember the stories and record ascents hold high priority, too. The “First Ascent” with the no hands rest and little memory of its upper reaches still seemed, for Ray, like a job unfinished, until last Sunday, January 6th, when we climbed Cryokinesis, from the ground via Karen’s Variation. We took turns successfully leading the (crux) last pitch, Ray first. It was my second time attempting the route and Ray’s third.

While the approach pitch of Karen’s Variation offers its own brand of delicate, awkward climbing: it’s never wildly difficult – Some ice, some turf, and a well executed hex placement get you through the bulging cruxes and lead you to more secure climbing – But upon reaching the terrace, the route’s character changes and very clean granite rises above. Powerful stemming on micro features and plenty of gear on Kinesis get you started. Cryokinesis diverges 25’ up (about 6’ below the existing bolt) with a necky pull to a good stance (Ray’s earlier no hands rest point).  Higher, the fascinating pillar spouts from a crack in the middle of the otherwise blank face. Beyond the ice, the wall steepens to gently overhanging with clutch thin cracks, a lone pin, suitably techy feet and just enough turf to keep your security in question to the last swing. This is a classy and ephemeral route. Check it out, but don’t stare too much at the fall sequence before you go. 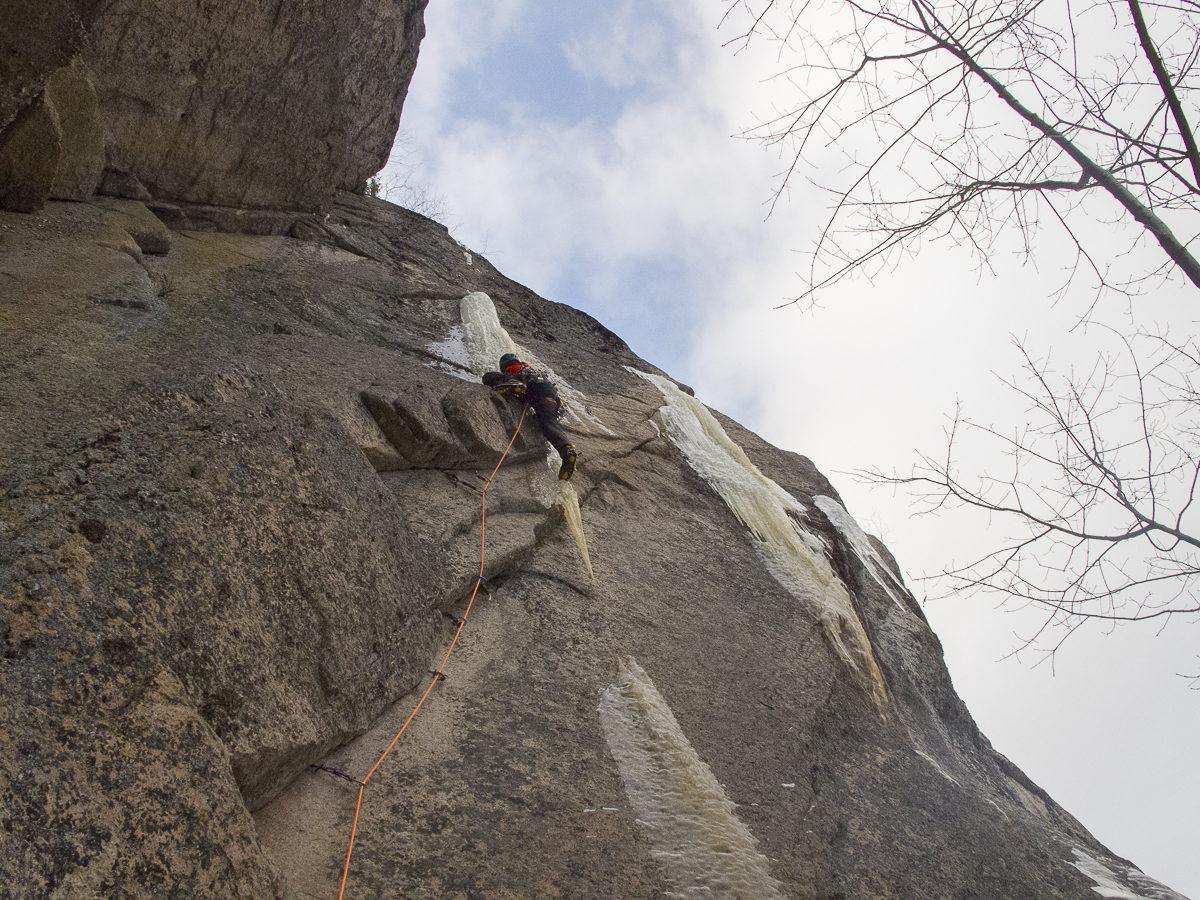 Ray Rice moving above his gear and into the ice on the first ascent. Photo Peter Doucette

*Thanks to Jim Surette and Granite Films for sharing his images for this publication.