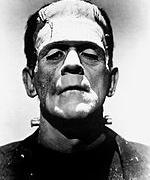 There is a beast lurking in Crawford Notch…

It has razor sharp teeth, scythe-like claws, a tail longer than it’s body, and it’s a mean mother$%#&er!!!!

It is Frankenstein’s Monster, and it is wreaking havoc upon unsuspecting gumbies and seasoned hardmen alike. 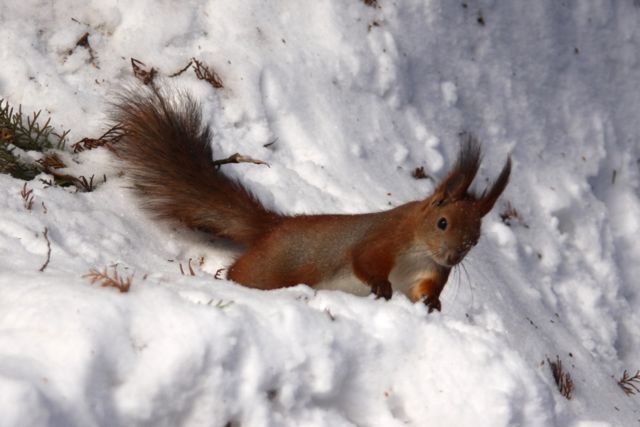 That’s right, if you haven’t already heard, there’s a red squirrel ravaging packs at Frankenstein. He’s stealing our PB&J, hiding our keys, and racking up roaming charges on our cell phones. Does he know how to operate a zipper? #$%& no! Like his larger cousin, Honey Badger, he doesn’t give a $#!&, and is going to rip open that nice new $300 pack in search of the sweet sweet goodness of that already eaten gu packet you left in the lid.

With such a rare and vile creature on the loose, I felt compelled to seek him out and see why he is reigning terror upon New England’s ice climbing community. I found him along the tracks, standing over the ravaged corpse of his latest kill, a poor, defenseless Wild Things Andanista, half a foil-wrapped bagel with nutella hanging from his shark-like maw.

I approach him cautiously as he measures me up with his beady eyes, slowly tearing apart the bagel. “What the #$%& are you looking at, gigantor? You want a piece of me? I’ll tear you and your fancy jacket up so fast… you better be moving on! But leave your pack, I think I smell Jet Blackberry in there… I love that $#&%!” His voice is something like Mike Tyson on helium, though I have the sneaking suspicion that if I’m not careful he’s going to bite off more than the lobe of my ear.

At this point I’m starting to question the wisdom of this venture. Sure, there are about 33 people above me on/waiting to get on Standard Route, but they’re all looking down sheepishly, glad it’s not them about to stare down the beast. I figure I better do something to get on his good side and toss him a Gu packet.

The monster tears into the packet like a contestant on The Biggest Loser wants to tear into a Krispy Kreme donut. At my feet is a whirlwind of red fur, foil shards, and purple gelatinous material. The creature looks up, left, right, grabs a pack from the pile of offerings to the deified beast made by frightened mortals, and takes off up the tracks. I race to follow, seeing him make a turn up towards Dracula.

Once I find myself at the base I see in the little nook on the left a guide consoling a client rocking back and forth curled up in a near fetal position muttering “why me, why me, why me.” The brute accosted the poor man, ripped the tools from his hands and was in the midst of campusing up the middle line when he lets go of the pack he stole.  I jump aside just in time to avoid getting clocked, hearing the “WHOMP” of the pack exploding into the snow next to me. “SUCKERS!” He’s topped out, and I see two black objects come flying off of the top. “ROCK!” We scramble out of the way as the two stolen tools are returned to their owner, their structural integrity questionable at this point.

A high-pitched maniacal laughter echoes from our left, from the top of the Coffin, moving towards Dropline. I take off down the climbers path and turn the corner just in time to see a small red ball running down Dropline. He’s down-soloing the hardest line on the cliff, face first, as if it were the escalator at the mall. He’s long gone by the time I arrive, huffing and puffing, at the base of Dropline. The maniacal laughter continues though, and I find the bushy-tailed vandal atop the pile of packs below Standard.

“Jet Blackberry, I love that $#!&. 2x caffeine! WHAHAHAHAAHAH” At which point he rips open another pack. As he’s tearing through the contents of his latest victim, I ask him why he terrorizes us so. “Dude, I live here, you all are trespassing. Do I come to your house and piss all over it? Seriously, what are you, 33? What’d you do, some kind of Freaky Friday thing where you swapped prostates with a 70-year old man? WTF?”

I ask if he’s ever considered being civil and asking people to change their behavior, but he ignores such an idiotic querry.

“Oh, me, sorry, that gu packet was really all…” Before I know it I’m thrown onto my back and flipped over, the leviathan ripping into my pack in search of any food I may have.

As he shreds my pack I manage to slip it off my back and drag myself away from the carnage in a panic.

“Run! Run! RUN!” I hear from up above on Standard. Looking at the beast I see a murderous gleam in his eyes.

I run… I don’t look back, I just run. I swear I can feel his hot, fiery breath at my heels, but I just run.

Hopefully someone’s selling a pack on the classifieds

The Balance of Life and Gravity
Scroll to top