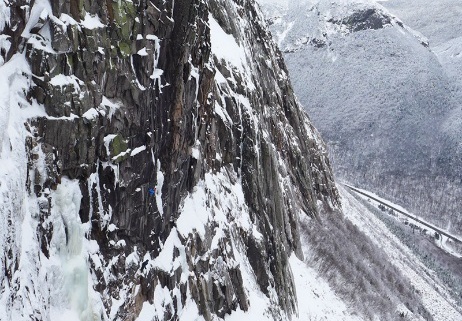 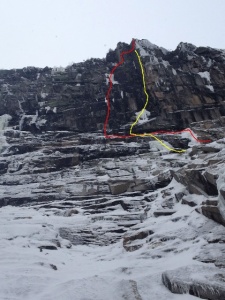 From the exposed ledges of the Whitney Gilman Ridge it would call to me. I’d snap seemingly random photographs and stare distractedly. I’d remind myself that as a guide I should remain focused. The giant corner system above the Cannonade Buttress is exposed and looms over the talus like an inverted cargo train. The steep face below is split by a series of cracks and seams that I visually kept following back to the base of this massive corner. In the winter, I’d rack up and wonder about the imposing prow which starts as a large corner, briefly evaporates mid cliff, and reasserts itself in steep prominence like a wave threatening to break on the talus beach.

Despite having made five attempts on this route with various partners, I knew that I could put it to rest this time. The source of this confidence being an extra five feet of ice not present during my last lean condition attempt. This ice made me think I wouldn’t need to place gear in the seemingly unprotectable terrain above my highpoint.

I have climbed on this route with some of the greatest members of our climbing community. Today was no exception, Jim Shimberg owner of Rhino Guides kept telling me I was “grilled” as we made upward progression. The icy cracks of the first pitch felt heavenly and went quickly. Snow conditions were perfect which made the technical pitch two traverse a sidewalk.

“In what felt like the boldest moment of my career, I forged upward. Now, too far above my gear to not hurt myself, perched on an overhanging arete above the talus, on a pitch I’ve lusted over for three seasons.” 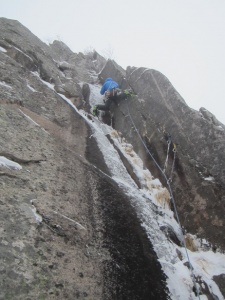 Pitch three is where the business begins. Off the piton anchor, I clip a nest of gear and situate myself at the first crux where a splendid vertical slab becomes slightly overhanging. With both tools over my shoulder, I side pull crimp an edge, step my front points high onto nothing, and at full extension I virtually kiss my ice tool ‘goodbye’ to wrangle a solid matchable edge. Committed, a fall from here would land me below the belayer in a big swinging arc. Better not to fall. A couple solid tool placements and strenuous lock offs allows me to clip a great piton and bust some layback moves on a flake to gain a rest beneath a small roof. 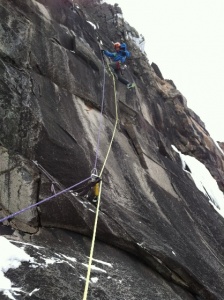 Reaching out over my left shoulder, I pull through the roof and high step into the next crux which feels like muckling a greased refrigerator with an iced up rattly hand crack on the left and an equally slick rattly finger crack on the right. Surmounting this block feels monumental.  After some steep cranking, I gain a good stemming rest and a short flaring corner that becomes an in-cut, kinda sidepull rail with good hooks and some tiny gear. Stellar, exposed climbing gains a tiny ledge which, with a micro wire, and a tiny fixed pecker a body length beneath my feet, provided much spice to mantle. Placing a great piton awkwardly at my knees, I was just a few moves from mantling onto the icy sloping ledge above. I’ve always said I was gonna kiss this ledge when I got there. Tough to describe the exuberance I felt from finally reaching this point. The rest of the pitch isn’t easy but comparatively its a walk in the park. I knew it was in the bag. 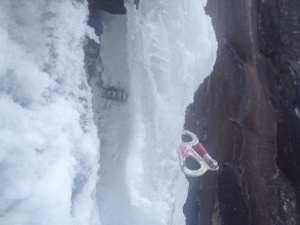 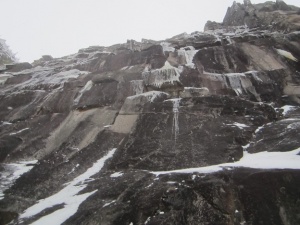 Pitch Three During a Previous Attempt 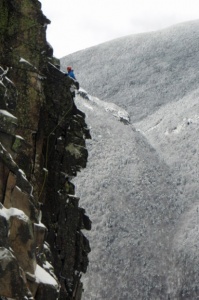 Topping out Cannonade Direct. Pitch 4 is a wonderful rock finish with good gear and cracks! Photo by Steve Robitshek

Michael Wejchert, and I met at Cannon Cliff the next day. I wanted to climb a variation to Cannonade Direct that would allow me to climb the entirety of the monstrous upper corner. Being a little sore from the previous three days of strenuous climbing, I slurped multiple infusions of Mate and blasted Rage Against the Machine. Another warm day. At the base of Cannonade Direct I racked up. Having climbed this amazing pitch five times, I have it rather dialed. I torqued iced up cracks, stemmed familiarly, and sloppily sped up the 65 meter pitch. Now for the variation! I situated myself under the first crux and placed a couple bomber knifeblades.  A right arching seam catered minuscule technical edges and tenuous high steps. The rock is bomber but I enjoyed a handful of whippers due to exploding micro flakes. Making these technical face moves earned me some awe-inspiring hooks and the most elegant horizontal finger crack which welcomed the necessary gear and an adequate rest before the next crux of gaining the ice.

I tapped my battered picks into the snowy little ledge. The ¼ inch space between ice and granite dispelled any myth of security. Wet snow pressed heavily on this precarious substrate. The rock beneath my ice tools was overhanging. I hoisted my front points up to my elbows placing them on perfect ⅜ inch edges. Finally some large footholds!! Here, with my ass in space and my ice tool moving to more secure rotten worthless ice, the ledge and ice curtain detach indifferently. Taking a big clean fall onto a bomber Lost Arrow I come tight on the rope before reaching terminal velocity. My head was down and I could see Michael looking at me as generously plump chunks of aerated ice pummeled me. Without lifting my head, Michael and I made eye contact. “I guess you’ll have to wait for a colder day.” Michael is smarter than I am. “I’m making it to that belay. I think it just got easier.” 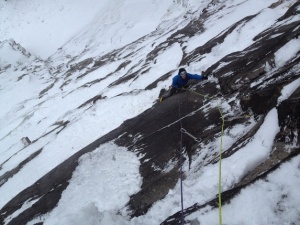 I know I’ve got one shot. The holidays are upon us. The rain is upon us. My early season project’s ice will not form again. I lower to the ledge and fire the crux, pull gingerly onto the steep ice and build a belay at the base of the mythical corner. 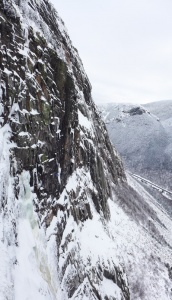 Everything had felt pretty safe up to this point. Despite the repeated whips and long fall followed by a heat seeking deluge of frozen water missiles, I was climbing very well and felt invincible. Obviously mixed climbing is dangerous. Nothing about climbing Mean Streak, Prozac, or Daedalus is “safe.” In fact these climbs provide one with many opportunities to get hurt. I firmly believe that in these situations our safety hinges upon our mental state. There will always be objective hazard, but when I’m climbing well, I’m not climbing scared. Surviving one of these climbs by the skin of my teeth does not seem sustainable. No route is worth a broken ankle, face, or spinal cord. With that in mind, I pulled off the ledge and soon found myself with a couple cams a few feet beneath my boots. Cannon does in fact have pockets of very steep terrain. Trust me. I look for it. I was getting pumped and I almost bailed. Casually, I told Michael I might fall as I began to ponder my exit strategy. He didn’t argue but we both knew this wasnt gonna be pretty. Looking down, I saw a small edge. Still in control, I reminded myself that someday I wanted to be a bold climber. I looked up. In what felt like the boldest moment of my career, I forged upward. Now, too far above my gear to not hurt myself, perched on an overhanging arete above the talus, on a pitch I’ve lusted over for 3 seasons. I made one more move to a solid hook and a serendipitous cam placement. The climbing eased up slightly as steep snow filled cracks and an arete composed of gravity defying loose nonsense made me feel at home. Or was it that I wished I was at home? Either way, leaving my last gear behind and pulling around the corner onto featureless slabs covered in ½ inch snice kept my attention for the last 40 feet to the trees. Seriously, do not blow it here… 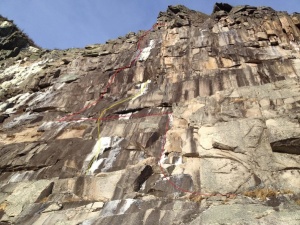 A Dose of Prozac and Some Positive Thinking