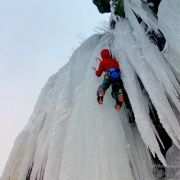 From Cannon Cliff to Crawford Notch and Beyond

It’s game on in the higher elevations this week!  Lines formed in Pinnacle Gully and other gullies in Huntington saw some action too, including Odells and Yale.  We even had our first minor epic (?) this week.  Yes, someone forgot their three screw anchor on Pinnacle.  So it’s business as usual on Mt. Washington.  The Great Gully in King Ravine got climbed as well.  Although perhaps the most exciting news was happening on Cannon Cliff.  The Black Dike got all sorts of traffic over the weekend.  Erik Thatcher and Art Mooney bailed off The Black Dike because of slushy conditions on Friday, but when Saturday rolled around, Eric Marshall and Jeff Previte found the freeze Friday night good enough, and fired it.  Erik Thatcher decided to return on Sunday with Alexa Siegel and take care of some unfinished business.  They got it done and he left his Nomic hanging on a tree as a flag of their conquest!  Too bad he had to return on Monday and do yet another lap with Art Mooney to retrieve the lone tool.

Also on Monday, Jeffery Dunn and Bryan Kass headed up on Cannon to the Dike, but took on a harder variation.  The duo climbed the Hassig’s Direct variation which had been looking good over the past couple of days.  Here’s Jeff’s report on the day.

“Already sleep deprived, Bryan Kass and I left NYC at 11:00pm Sunday night and swapped “leads” northwards through the driving rain. Pulling into the parking lot at 10am, the presence of another party’s truck was the only indication that conditions might be good on the cliff which lay invisible behind a billowing fog bank. With temperatures above freezing and a steady rain falling, there was no sense of urgency while we ate a breakfast of sausage and chocolate doughnuts and desperately tried to make sense of our wholly disorganized pile of winter gear.

Eventually, we disembarked the van and made our way down the bike path. Halfway to the approach trail we encountered the other climbing party, Art and Erik, who shared the promising conditions report; “soft”.

The first pitch took a screw in addition to the good cam and I set a belay under Hassigs. Unlike the last time we had come through, Hassig’s was in fantastic condition and sans large ice mushroom top-out. Bryan lead through and found good rock gear down low, a decent thread, and then a good screw. Already soaking wet, I was allowed some personal time to explore the fullness of a winter experience. The right side top-out, starting off with a nice ice curtain and moving into aesthetic moderate alpine mixed, brought us to the trees.

Arriving back at the van, there was only one suitable way for two NYC based climbers to celebrate starting the ice season in mid November: drive home immediately and get ready for work in the morning. The van stopped for 20 minutes to get gas and food, arriving in NY just over 24 hours after leaving.”

Across the way from Cannon, others were finding enough ice to climb.  The narrow gully up in the Big Slide Area on the steep western slopes of Mt. Lafayette was picked at by Nick Yardley and David Crothers.  This great little gem of a route is a good early season option.  It’s a two second approach compared to other routes on Mt. Lafayette’s southwestern side such as the Escadrille.  You can bet that route, along with Lincoln’s Throat are in top notch shape.  Also, it wouldn’t be surprising if the Ammo Ravine on Washington is good to go.  Only one way to find out…

So with things blowing up, Doug and I decided to take a few practice flights in Crawford Notch.  WooKong 3.0 and ARDU buzzed by the forming ice routes in this video condition report.

In the Adirondacks, Ian Osteyee of Adirondack Mountain Guides and Holly Blanchard of The Mountaineer got on a very thin Chouinard’s Gully over at Chapel Pond.  With snow in the forecast for Wednesday and Thursday and temperatures staying below freezing into the weekend in Keene Valley, it’s go time!

In Vermont, Steve Charest and Alden Pellett got some very thin ice in Smuggler’s Notch last weekend. The pair ticked off Jeff Slide and most of Blind Fate in very thin conditions but finding the finish pillar hadn’t touched down, they bailed from there. Pellett returned during the week with Kel Rossiter of Adventure Spirit Guides to finish up the job on the now freshly-formed free-standing column at the top of that route which they said was “not trivial”.  Pellett, afraid the foot-thick column might collapse with him on it, didn’t place any gear until 15-20 feet up when he was able to get a couple of stubbies in where the ice was attached to the rock.  For the latest conditions in the Notch, check out the conditions page. If you’re thinking of heading up to Smuggs this weekend, a good six inches of fresh powder has locals skiing the Notch road, so make sure to bring your boards for an easy run back to the car!

Down in Pennsylvania, it looks like a quick window of opportunity opened up for November in the Narrows! Climbers in PA had a stellar ice season last year.  Let’s hope for more of the same.

Back up to Ontario, the ice climbing season has started in the Batchawana Bay!  Conditions report courtesy of Superior Exploration Co.

By Courtney Ley and Alden Pellett

Special Thanks to  Erik Thatcher and Jeffery Dunn

The Swiss Machine in Boston

A Dose of Prozac and Some Positive Thinking
Scroll to top