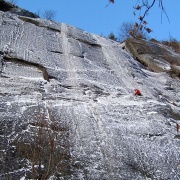 Mark Meschinelli and I had a good day at Poko on Friday the 27th. Things looked to be shaping up a bit when I was there on Thursday, so I brought in a substitute guide and played hooky with Mark. We looked at “Stingray” from the road and it looked intriguing, so we went for a look. It still didn’t look certain from the ground, it seemed less formed than when I did the second ascent with Chris Fey years earlier. I climbed up and across the “Sting” ledge and down to the belay. Once Mark came up, I went up to take a look, and although thin, the ice quality was good and attached.
The ice formed a bit left of where it had before, and reaching the “Sting” anchor was difficult. No gear, and 50′ above the “Sting” ledge, I took care getting to that anchor with an off balance kind of iron cross move. 30 seconds of awkward, careful chipping allowed me to clip and have a piece of gear. It gets a little steeper right after that anchor, but the ice also got a little better. The last time I did this route I climbed from that spot all the way to the dike ledge with no more gear. On this ascent I was able to avoid the 150′ run out, finding a bolt frozen in the left side of the smear about 40′ up from the “Sting” anchor. Mark had told me the general whereabouts of the bolt – a good partner indeed. This time I used a set of Blue Water 70m doubles and easily reached the anchor point, better than the scary rope stretching super stubby/bad rock anchor of the last ascent. Mark came up and we headed up the upper pitch. The upper pitch was fun, sticky ice through the small roof above and to the big tree/rappel anchor.

That would have been a great day all by itself, but as we rappelled down we couldn’t help looking over at another smear that had formed from the middle of the “Sting” ledge straight up between the rock routes “Easy Street” and “Unforgiven.” We rapped and Mark and I discussed our options. Mark cautioned that it looked much thinner than “Stingray.” I agreed, but the ice was climbing well that day, and I decided to have a look. I climbed back up the “Sting” ledge, tucking the ropes behind the ledge as “gear”, and shimmied toward the smear. I could see an overlap about 50′ up, that might take a TCU placement. The start was very thin, and crampon purchase had to be carefully managed. Already being up on the “Sting” ledge created a substantial distance above the ground. The new Cassin Blade Runner’s shined. I reached the overlap, and was disappointed. I fiddled with a blue TCU, but I should have brought the little purple one. I left it, but it was as useful as a Christmas ornament. I knew the “Unforgiving” anchor was up there somewhere. At about 100′ I saw a red sling frozen in, and 30 seconds of chipping revealed the top bolt of the “Unforgiving” rock anchor. That was good timing as it steepened right there. Having Mark Meschinelli as my partner can’t be underestimated.

Mark is a calm, cool guy, and he neither incites this kind of mischief, nor denies it. He simply inspires calm, and that is a great climbing vibe. Another thing Mark is good for is telling you where hidden bolts may be, as he’s spent a lifetime climbing at Poko. Another 40′ up above that anchor clip and I remembered Mark had said “keep your eyes open, there are a few bolts up there,” and there was a bolt. A little chipping, clip, and my mood improved markedly. Another 40′ and the angle decreased, I placed a 10cm screw just before the ledge, but the ice still wasn’t quite thick enough. From there it just links up with the same upper pitch of “Stingray.” The new pitch is a hair longer than the “Stingray” pitch, but the line is narrower, and the ice thinner. We both thought it a bit pumpier. The name is Meschinelli’s favorite new brew, which we enjoyed curbside. “Ruination” WI 6- X