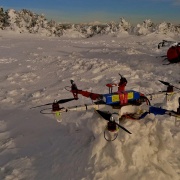 It all started one night just this past October over a couple of beers. We looked at the ‘Mammut 150 Years Peak Project: Trango Towers’ video which used radio control helicopters to capture amazing aerial climbing footage. After the two-minute video was over, Doug looked at me and said, “Hey, we can do that!” If it had been anyone else, I wouldn’t have believed a word of it. But it was Doug Millen, and a short two months later, we were taking his first custom built helicopter out for its first test flight.

It has been nothing short of a journey getting to where we are right now. It started off by learning how to build them and then to fly them. If that wasn’t enough challenge, we ran into seemingly endless electronic issues, big crashes and the subsequent repairs and re-builds. Eventually we faced the inevitable video problems, worked through how to get good footage and then learning the video editing software. And we are still at the beginning of this journey because there is so much more to learn and troubleshoot. I wish there was a camera constantly rolling during these past months to film all that has happened up to this point. It has been an intense labor of love for Doug and it’s been an incredible experience being able to work with him and seeing our shared passion and vision turn into a reality.

The UP Footage: First Takes from NEice.com on Vimeo.

I’d like to present the film we showed at the Adirondack Mountainfest and the Vermont Smugglers Ice Bash in a new edited format to everyone who is a part of NEice. I hope you enjoy a collection of the very First Takes!

Thank you to everyone who has been a part of making the UP Project such a fun experience so far and to Luke Cushman, Chuck Drew, Adam E. and all the climbers that let us buzz by.

Adirondack Ice: Back On the Mend