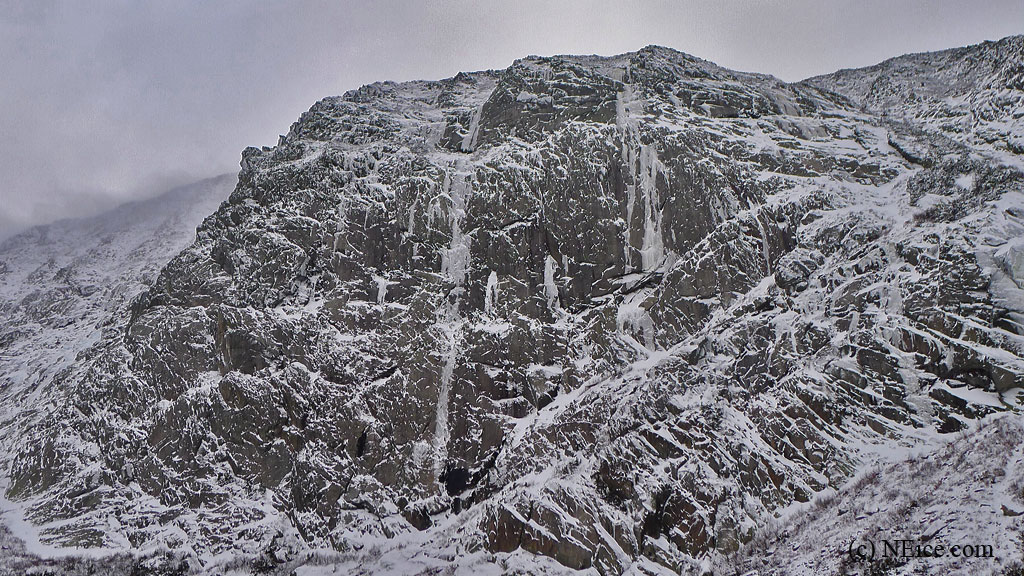 We arrived in Millinocket early Saturday evening with bare ground showing but woke to snow plows and about 2 inches of fluffy snow. Not good sledding snow to cover the gravel road that would take us to Roaring Brook. Sizing up the situation, as I filled my wagon tires at the gas station, Kevin ran across the street like a kid to buy a wagon at the tractor supply. Nothing was going to stop him from getting to the mountain and the wall he had dreamed about.

Early season in Baxter is a crap shoot. You never know what the conditions will be, for the road or the ice climbing. Most years the ice climbing is great, but the way in, not so great. How you get in is the question. Wheels are usually involved. Many times it is a ski in with a sled to Roaring Brook. Some years we have driven in. Mountain biking in before the snow covers the road is popular. We had sleds, wagons, skis, a mountain bike and Kevin Mahoney. Everything we needed to get to Chimney Pond and back. We were well-prepared. 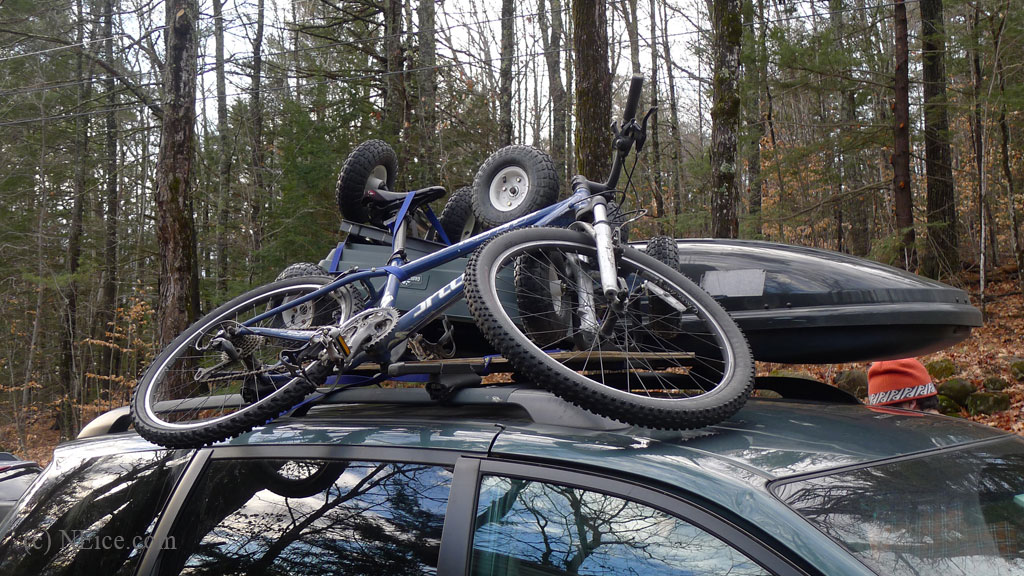 This year it was a mix. We were able to drive in to the game preserve gate, saving us about 6 miles of sled and wagon hauling. We dropped the gear at the gate and Kevin took the van out to the winter parking area with the bike for the return journey. We made short work of the 5 miles to roaring brook over about 1 ½” of snow. Kevin caught up with us after about an hour. Wagons or sleds, it was not much of a difference. They both worked well with the thin snow cover. 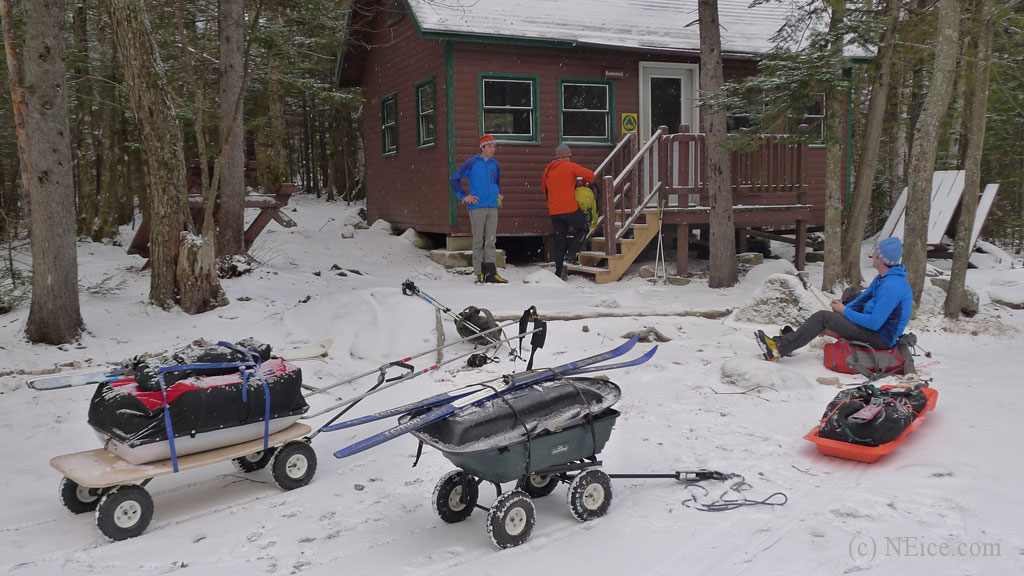 Arriving at Roaring Brook early, we took advantage of our spare time and ferried loads up to Chimney Pond for our week-long stay. On our return to Roaring Brook, a light snow fell and the temperature was dropping. Our spirits were high and the liquor flowed in the cabin that night.

The next morning we brought the rest of our gear up to Chimney Pond…with foggy views of the north basin, our minds ran wild. What would this next week bring? Our proposed ice line up the wall looked in! Were we ready? Would it go?

We settled into our new home. We had the cabin all to our selves. Tools were sharpened and we readied for the battle ahead. At 4am the stoves roared and we packed for the day. Kevin and Michael broke trail over the newly fallen snow to Blueberry Knoll, and then we began the ¾ mile bushwhack to the base of the Tabor wall. The day was clear and still as the sun came up over the vast pine forest to the east. 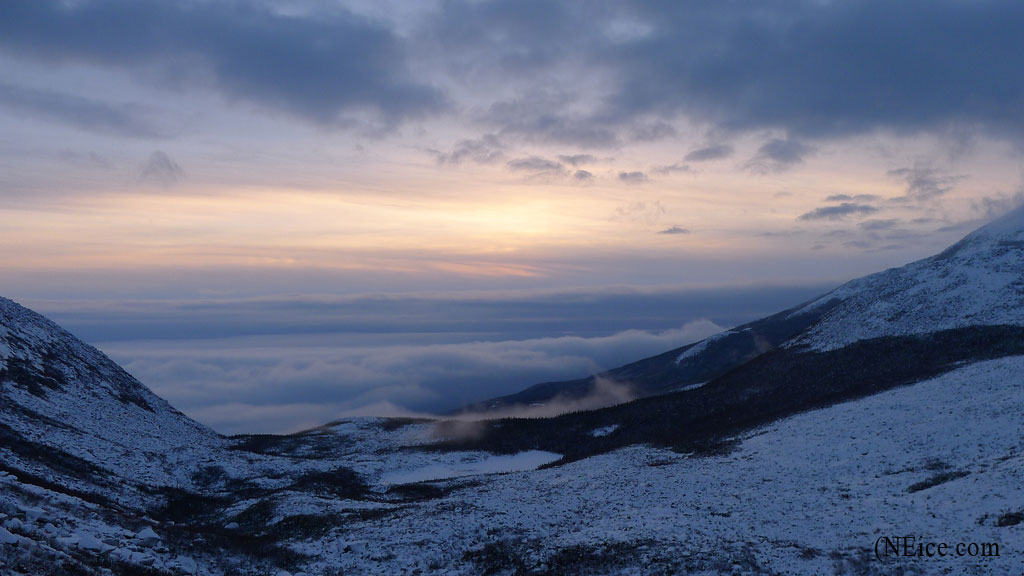 With the sun peaking though the early morning clouds we could see the biggest alpine face in the northeast in front of us. Bayard said “good thing we get the foreshortened view from here.” This face was huge, over 1000 feet high, and we needed to get to work.

The ice did not come all the way down to the base so we looked for a way up to the ice. Bayard and Michael took a line to the left and Kevin and I took the direct line just to the left of the ice. The cliff was full of rime ice and reminded Bayard of Scotland. 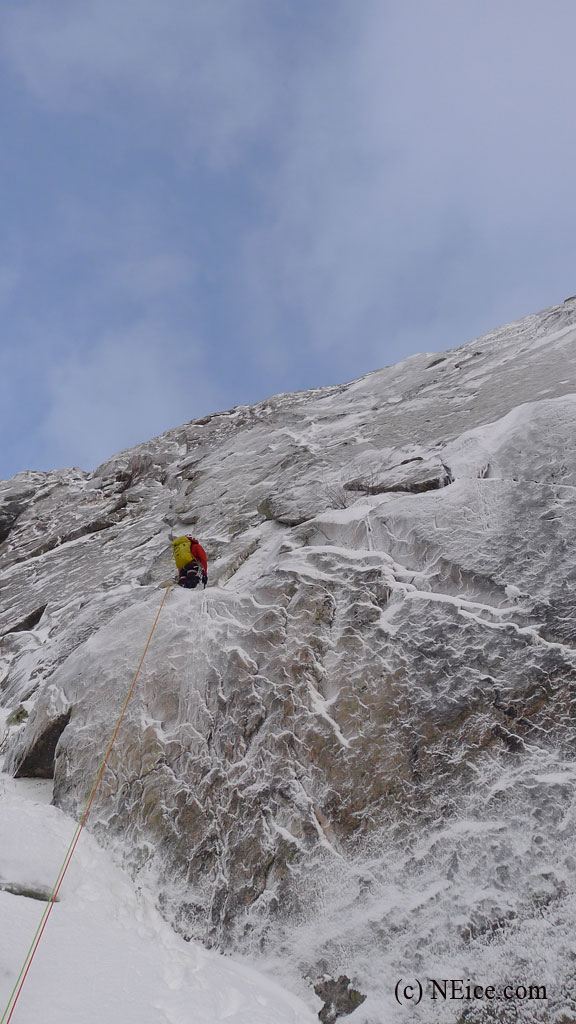 Kevin starting up the big wall

Kevin forced his way up and into a chimney. He was too big for this icy entrance that would take us higher. He removed his pack – not good enough. He removed the rack, then a layer. But the chimney was still too small, despite such determination to get up this climb. Looking for another way he climbed out onto the arête for some spectacular climbing on thin flakes to a good stance above. I followed the pitch. One down and how many to go we could only speculate. From this belay we could see the ice. It looked thick enough, but how to get to it? Kevin headed up a thin corner placing a single gold cam on the way. From there he headed up into no-mans land. Struggling for pick placements and protection, he finally got a small hook in a crack 30 feet up. With the pump meter going, he headed for the ice. Moving right on very thin friction moves, his feet cut loose and he was left hanging by only his tools. Struggling not to fall, he gained control and moved quickly and deliberately onto the ice.

With no other way up, we rappelled to the ground to regroup. There must be an easier way to the top. Kevin started up a ramp system to the left with easier ground. Fun climbing lead us to a stance near where Bayard and Michael were doing battle. They were not having much more success than we had. Bayard took 3 whippers on the first pitch alone. They forged another ½ pitch higher then rappelled to the ground. They had had enough for the day. 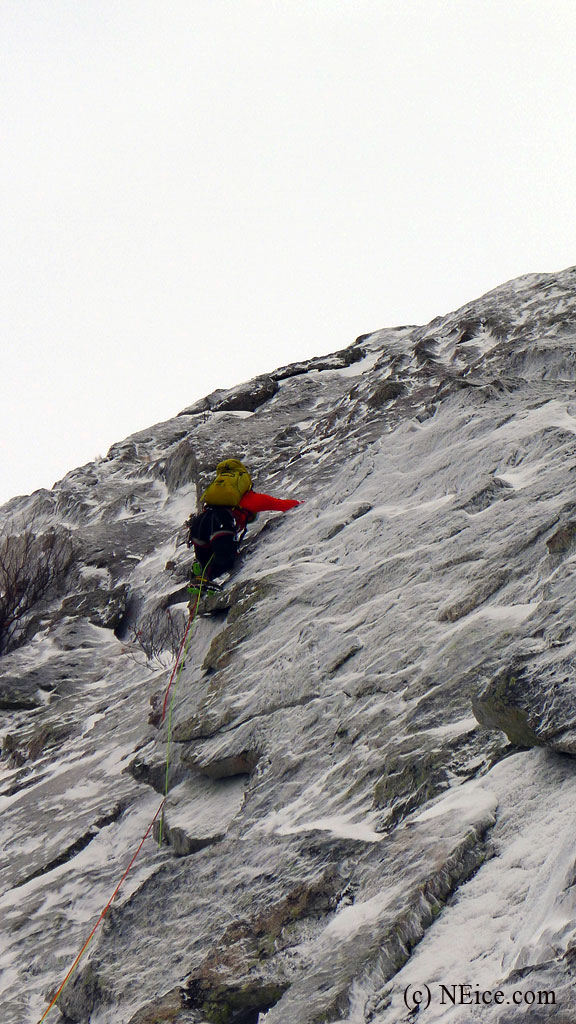 Kevin climbing out of the chimney

Kevin and I committed to another pitch. Some fun climbing took us to easier ground, but with a steep head wall above, the end of daylight coming fast, and no real hope of getting to the top, we rappelled. As we hiked back to our comfortable home at Chimney Pond, we were treated with views of the cliff as the fog moved in and out. What a spectacular wall. That night we nursed our wounds with Scotch, Fireball, and Moonshine. We gave it a good a shot, as well as anyone, but the conditions were not right. We probably missed the window by a couple of days. No mater what, it was a good effort and great to be with friends in this special place with no one around for over 20 miles.

The next day we wanted something different. Bayard and I headed to the Pamola Ice Wall. Michael and Kevin had their eye on the ‘Cilley Barber”. At 9am when we signed out at the ranger’s cabin, they were already 9 pitches up. They were back at the ranger’s cabin in no time. 4 ½ hrs round trip. Rob the ranger commented, “they smoked that climb”. Kevin said they were greeted with 40-50 mph winds and blowing snow as they topped out and headed to Baxter Peak. True alpine conditions. This was Michaels first time on the Cilley Barber and first time summiting Baxter Peak. Does it get any better?

Bayard and I found some great ice on the Pamola Ice Cliffs. We climbed “Frost Street” and “Walk on the Wild Side”. Bayard made the grade 5 ice look so easy. But I guess, compared to yesterday, it was. 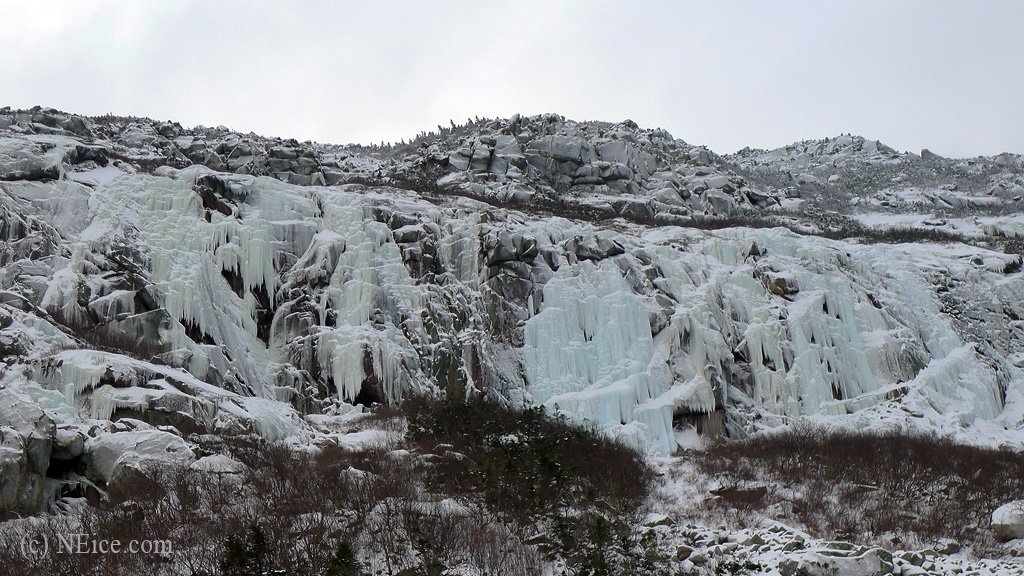 The next day was our last climbing day. The conditions had not improved but the boys wanted to give the Tabor Wall another go. I elected to take a rest day in preparation for the long journey out tomorrow. Let the young lads have at it! 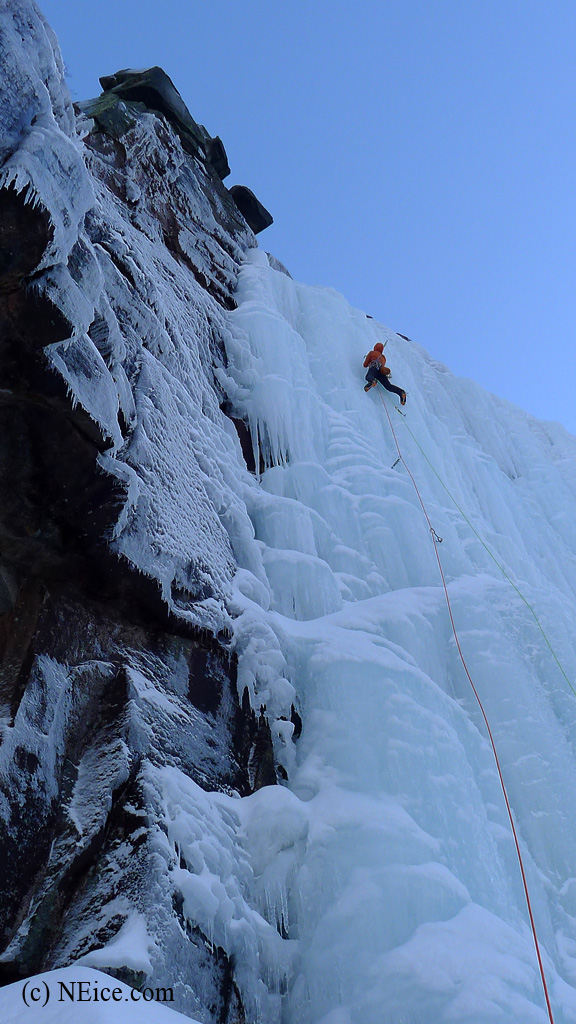 Bayard on “Walk on the Wild Side”

We partied late into the night (8pm ;-)) and consumed the remaining liquor. Bayard and Michael tried to sneak off to bed earlier but Kevin and I would have none of that for our last night at Chimney Pond. With a few choice comments about masculinity and heritage they felt the pressure and joined us for a night cap, and we all reflected on our trip and laughed into the night.

At 4am the routine began. Off they went for another adventure. I enjoyed being able to sleep in and spend the day doing chores around the cabin and preparing for the hike out.

The boys were back early. The conditions limited their 2nd attempt on the wall. They tried working a line right of the main flow. The warm weather and sun was just eating the ice making progress difficult. All and all they had a great day of mixed climbing and got to know the wall a little better. They vowed they would return! 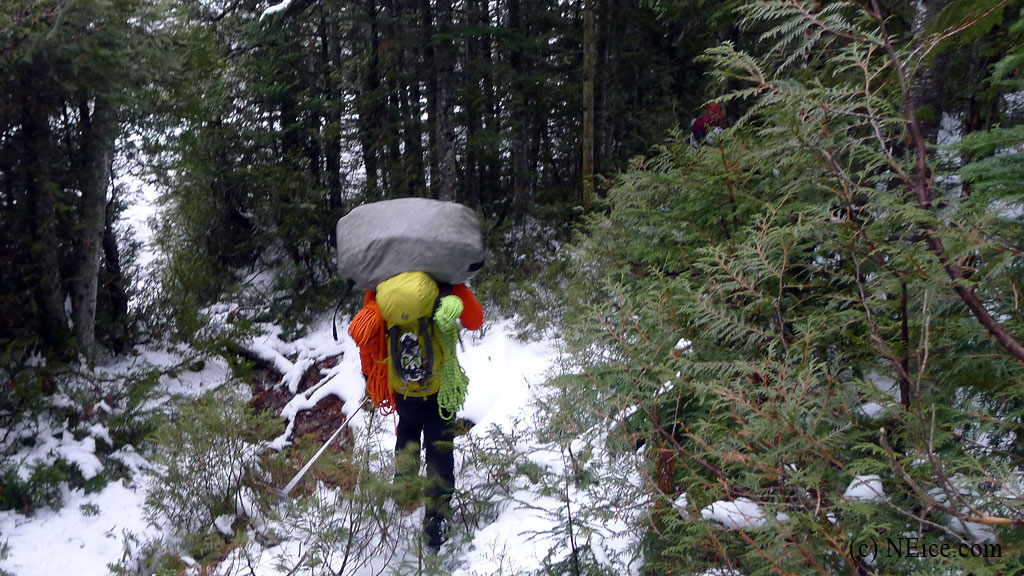 After some hot soup we packed up and started down with our heavy loads to Roaring Brook. The wind picked up and it started to snow. The trail was icy but snow covered and we made short work of it. 5” of snow lay on the road at Roaring Brook. Looked like a good ski out the next day.

In the morning we woke to rain and 2” of slush on the road. Again, wagons or sleds, it really didn’t matter. Kevin headed out an hour early so he could pick up the bike and ride out to get the van, another 6 miles. He is the man…taking several good diggers on the snowy, icy road before reaching the van.

It poured rain on us the whole way out and we hesitated to stop – the wet & cold kept us moving to stay warm. We were soaked to the core. We passed the gate and within 500 yards, Kevin showed up with the van, a welcome sight. We packed the van, and toasted with PBR’s:  A Great Trip. We will be back!!! Off to Millinocket and we were having breakfast before 10 am.

More photos from our trip 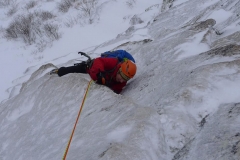 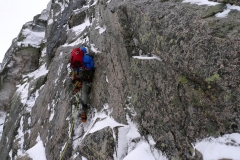 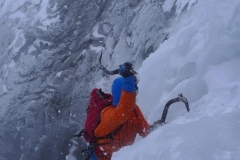 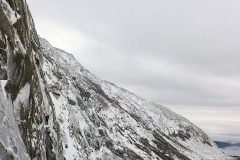 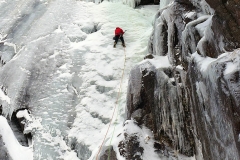 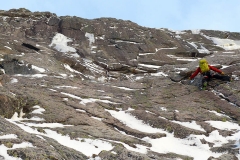 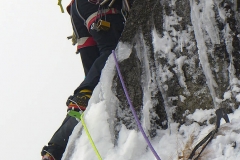 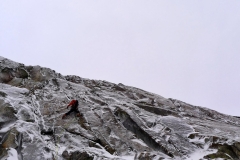 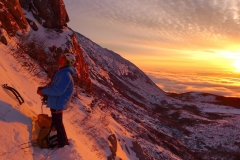 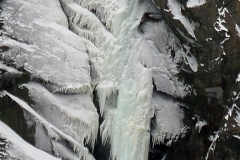 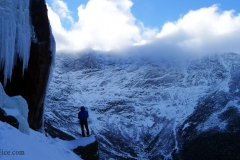 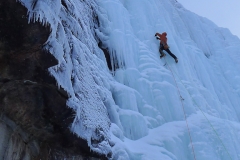 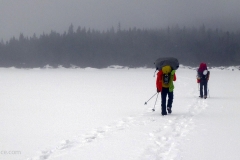 Michael Wejchert – See his blog post of the trip

* Many thanks to Ranger Rob Tice and Baxter State Park for all the hospitality and a well run operation. 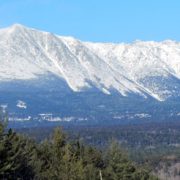 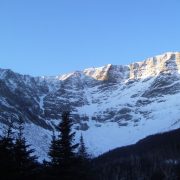 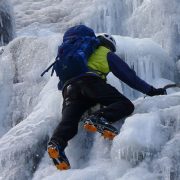 The UP Footage: First Takes