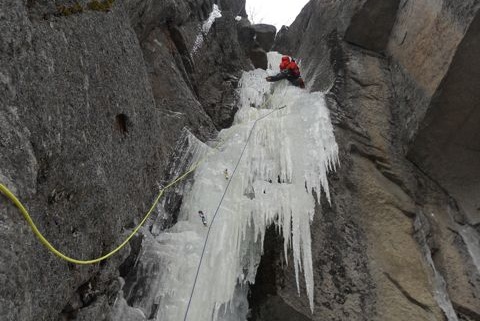 I don’t know who I’m talking to… it’s just me and the huge chockstone looming above. Doubt is creeping in, but it’s kind of a moot point. I’m committed. The ice below the chockstone is ok, but it isn’t really of the quality that I’d be psyched to set a thread. Besides, this is what I signed up for. You don’t head up Repentance just to bail below the signature moves.  This climb was four years in the making, and there was no way I wasn’t going to finish it.

Repentance first captured my imagination four years ago. At that point I was just starting to climb harder lines, and it was in FAT. I worked my ass of to find a partner, but with no luck. Drew was interested but was stuck in Burlington without a car. For years I kicked myself for not driving out to pick him up…

The first pitch is just engaging enough to make me wonder what I’m getting into. Linking pitches one and two is DEFINITELY out of the question… It seemed like a good idea last night. But as Don Mellor once told me, belaying is just part of the experience. It’s beautiful out, I might as well enjoy the break, and maybe I’ll come up with a reason to rap down and go home. 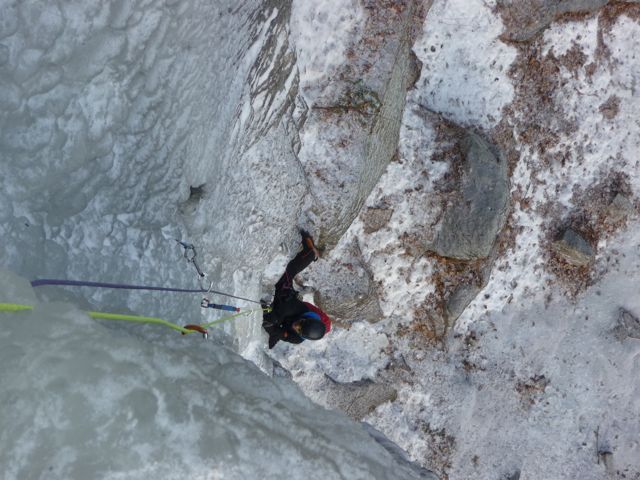 I place a screw in the column pouring out of the chimney above while Pat W. flies up the first pitch like it’s a WI2. Seriously, is this the same guy who was taking forever following 4s earlier this season? Fuck, now I’m the slow one. The screw is shit, but it’s better than factor-2ing my anchor… I think?

A few weeks later I was back at Cathedral with Chris. We got scooped though by Erik E. on one of his dawn patrols. We opted for Remission instead. I probably took over an hour on the first pitch, but the second went quickly. Chris was clearly not psyched by the pillar above but I wanted to at least check it out. I climbed right up to the steep stuff in the pillar, but decided perhaps it wasn’t the right day to do it, and down-climbed back to the belay. We rapped down, but Repentance was free… we passed that day, and again I kicked myself.

My right foot is in the column, and my left finds good features on the rock wall to my left. The screw I placed while at the first belay is absolute junk, but I place a second, which inspires at least a little bit more confidence. Before I know it, I’m no longer stemming across the void and have both feet on the front of the column, ice tools above the narrow choke-point from which the column pours – “holy shit, I’m actually through this” I think. 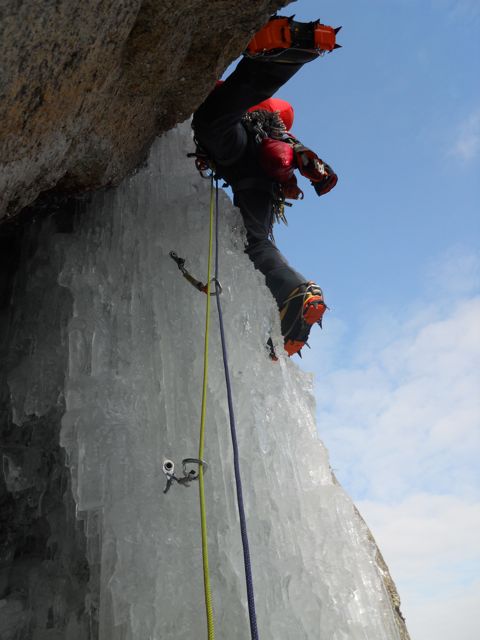 One crap screw, one good screw, and great feet.

“This is going to be hard the whole way!” I call down to Pat W. And it is. There’s plenty of ice in the chimney above for some good sticks, but this isn’t the straight-forward, classic A-technique climbing of the Lake. This is full-on dry-humping my way up the chimney. First it’s one hip in, then the other, then both are squeezed in (good thing I’m not a MOG). Then it’s back to one hip in.

Swing, awkwardly grope the rock and grind on it like a 14 year-old boy with a busty blonde, repeat…

The chimney seems to go on forever. Just when I think it might get easier and more straight forward, I’m getting intimate with some of Cathedral’s finest once again. “Hey Pat, you should just put your belay jacket in the pack and throw it down to the base, you definitely don’t want to bring it up!”

Eventually, I reach the first fixed anchor atop the pitch. I’d really like to go to the second, but I’ve used up all my slings (actually, I didn’t… I had plenty more, but they were hidden behind the rock rack… dumbass). I build the belay and bring Pat W. up to me.

Pitch 3 is the antithesis of pitch two. The ice is straight forward, though fully running with water on the right side. My arm is soaked, but the swings are hero-sticks for a good portion of the way. 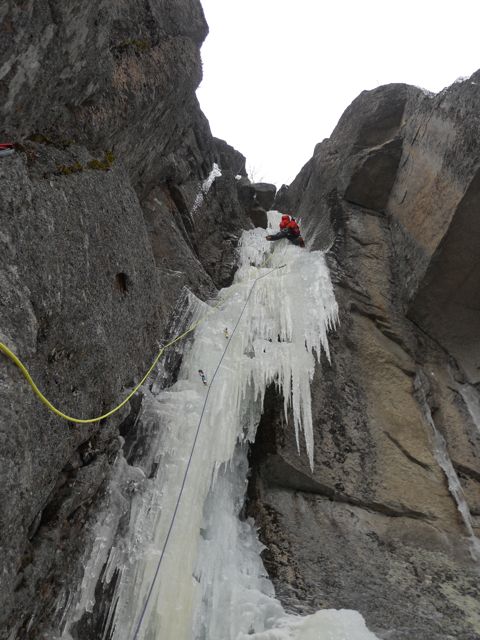 The ice seems to be leading me to the right side of the chockstone, but I know I can get a #3 in the left side to protect the exit. I look at the right, and decide “fuck it”… I’m going for the left.

Work up under the chock stone… damn that roof is big…

Throw in the #3… it’s a bit of a blind placement, I hope it isn’t in an icy part of the crack.

Leave the tools in the ice below, undercling the chockstone, backstep my left foot on the divot in the rock wall. Throw in the fist jam, reach WAAAAAY under the stone to grab a tool, cam it in the crack, reach even further under to grab the other tool, hook a crappy little divot at the top of the crack. Stem right, move my foot up left, lay back on the cammed tool, throw my left foot way out on the arete… Swing up above the divot… nope, rock. “Fuck!” I really hope I don’t whip onto the blindly placed #3 below the chockstone… I think the screws just below it are good enough…

Turf shot out left… turf shot up above and right… And like that, it’s all over.

Repentance is the best route I’ve climbed. Period. It’s hard, it’s fun, and offers some unique climbing experiences in a beautiful setting. I can’t believe I was even thinking of leading it four years ago… there’s no way I was ready. I’m not kicking myself over blown opportunities any more. This was the perfect time to finally climb a long-sought after classic.

Back into the Editing Room Live Free or Die!
Scroll to top