Standing at the first belay, I’m staring up at the crux of the route right off the deck.  Protection will be questionable.  I’m sure I’m strong enough to pull the moves, but is it worth the risk?  I’ve got time to decide – I can always wait until Matt’s up the first pitch before committing one way or the other.

I’m up and down on the column of ice below the small roof of ice above like a slow-motion sewing-machine needle.  Each time I suss out some of the moves and try to figure out how I can protect this section.  There’s a pin on the right, but it’s questionable at best.  I get in a 16 but neither this nor the pin will keep me off the deck if I blow the moves.  I think I might get in a 10 a little bit higher, but getting into a position to do this would mean committing to making the moves through the roof.

I’ve climbed this route a thousand times in my mind.  It sees multiple ascents each day, often in conditions far more difficult than those I’m looking at.   It’s been on my tick list for several years now, and though it may not be unfinished business at this point, the way it has captured my imagination is something right out of Inception.  I’ve seen every photo of it on the photopost.  I’ve even searched photos of it with various misspellings.  I can’t get this route out of my head.

The ice is hard and brittle.  The overnight lows were somewhere around -10.  The outer bit of the column is hollow, and the inner section is solid feeling, but candled.  Just below the roof is a section of the most hacked up, thin, and seemingly nasty looking ice I’ve seen all season.  Swinging into it seems like a bad idea.  Will hooking it rip it right off of the rock behind it?  It’s obviously been getting climbed, all I have to do is focus and move upward.

Some days the route just isn’t ready for you.  But in this case I’d be lying if I made this claim.  Self-doubt and fear erased any confidence I had in myself and my abilities.  Others have climbed the route in far more difficult conditions.  Hell, earlier this season I had made harder moves on far more dangerous terrain.  Regardless, I wasn’t ready that day and we quietly rapped down to the ground.

Some days, in a fit of delusion, I actually convince myself that I’m a hardman.  Or at least, I think I want to be?  Do I? $#!&, what the #[email protected]% am I thinking? Sobering up from my fantastical delusions, I’m pretty sure that a: I’m not a hardman, and b: I’m not really sure I want to be one.  Sure, it would be awesome to solo WI6 and figure-4 my way across magazine covers, but am I really cut out for it?

In fact, it seems that I have an internal battle going on each and every day within my own mind.  In one corner we have my ego  – inflated with an unwarranted and largely unearned sense of of talent and self-worth. Repentence?  Should be a breeze.  MindBender? I’ll hike it, no problem.  Run-out trad M8? A figure 4 here, a stein-pull there…  You get the point.  Mid-week, comfortably within the confines of my home, there’s nothing I can’t climb. 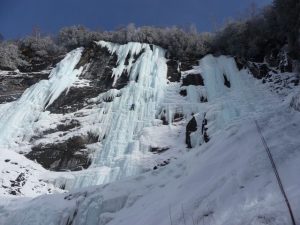 Yeah, I could be this guy, but not this day… that’s my set of ropes on the right!

In the other corner is my sense of humility.  The part of me that thinks “it doesn’t matter what grade I climb” as long as I’m out swinging the tools.  This is the part of me that would think a romp up Mt. Webster, or linking pitches in Stony Clove is a hell of a way to spend an afternoon. We can call this my inner-everyman.  Although my inner-everyman lacks the sense of adventure and the potential for glamour that could accompany the inner-hardman, it is the safer avenue: There are no crushing defeats, no scary run-outs, and no moments of sheer terror. 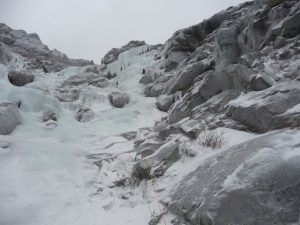 So much of my identity as a climber, and indeed my identity in its own right is tied up in the dichotomy between my my ego and my sense of humility.  Sure, grades don’t matter, but there’s a sense of accomplishment and euphoria that accompanies climbing something hard.  When I look at some of my best days climbing, it’s the days in which I pushed myself harder than I thought I could that stand out above most of the others.  Climbing a hard route in good style perhaps panders a bit to my own inner elitism, but damn is it satisfying.  The danger in this, of course, is the crushing return to reality when the desired result doesn’t happen.

I’m back for another run at the route.  We get an early start to beat the crowds that will be out and about on IceFest weekend.  Of course, there’s someone there already as we arrive.  Rather than wait, we jump on another route nearby.  It’s sufficiently hard (in fact, it’s probably even harder), and this time the sense of daring wins out over the fear.  Although we don’t finish the route, the two pitches we do climb are stellar and involve some good, committing moves.  We turn around and retreat when the third pitch is a raging waterfall, and I’ll keep telling myself that this is a justifiable reason for doing so.  Of course now I have two routes to finish… 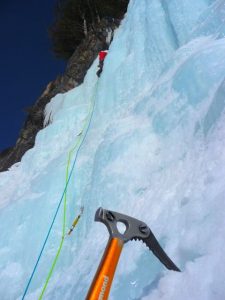 The future is NAO!
Scroll to top