The NEice helicopters and flight crew were busy during this year’s Adirondack Mountainfest! Doug and I arrived on Thursday night with the helicopters calibrated, charged up and ready to fly.  We were on a mission to capture some footage of the spectacular ice climbing that the Adirondacks has to offer. We were lucky to be able to unpack our bags at the Adirondack Rock and River Lodge, the co-host of the event, along with The Mountaineer. The accommodations were no less than perfect. 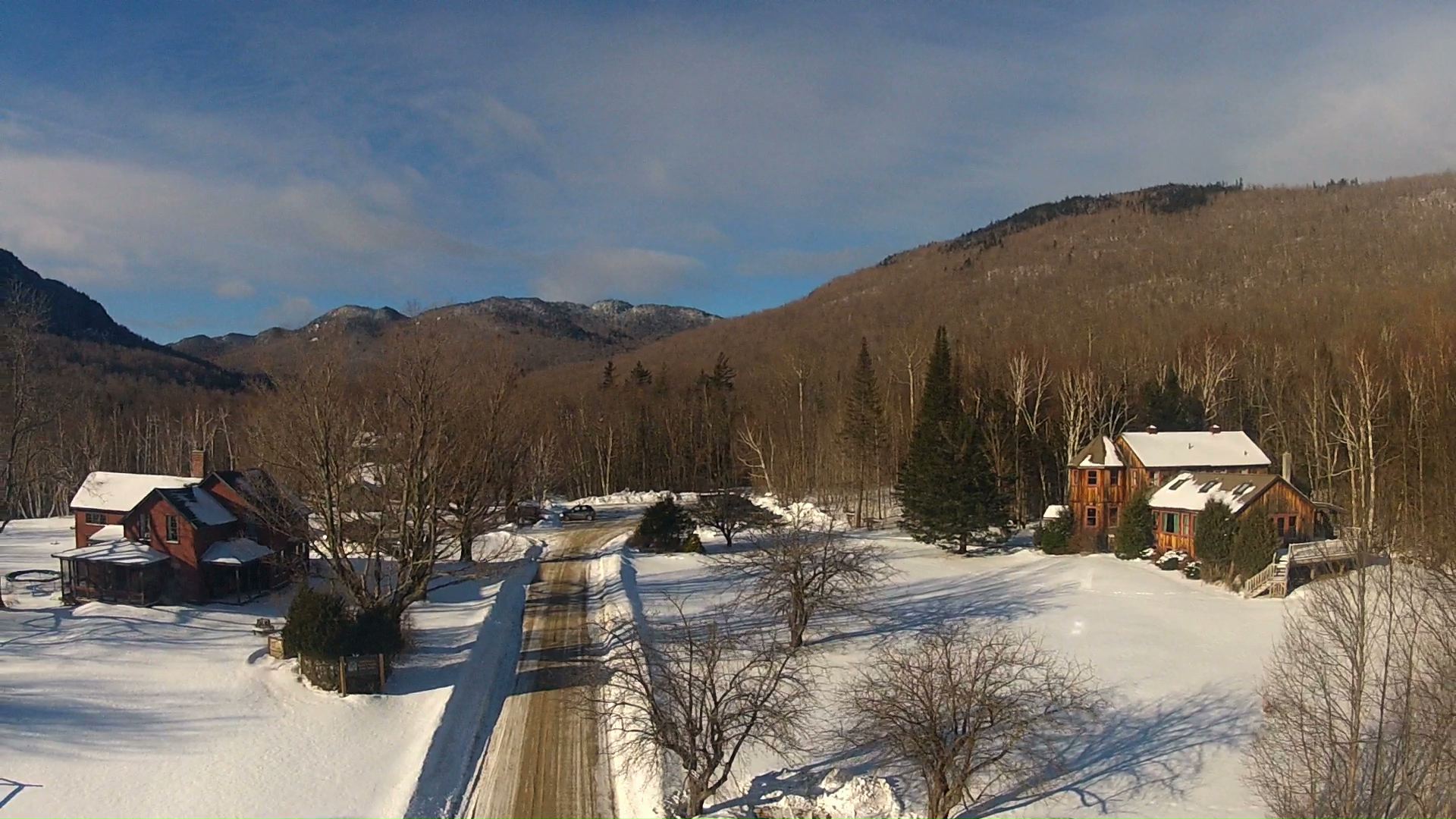 On Friday, we set off to check out conditions at Roaring Brook. We were not totally surprised to see the brook was still roaring, but with the excellent lighting and the beauty of the waterfall, we launched the WooKong for a closer look.

Then it was off to Chapel Pond. Things were in excellent shape and there were climbers spotted all over the area enjoying the ice and the beautiful weather. In the canyon, there were some guided parties getting a head start on the festivities. It was great to stop and chat with them. 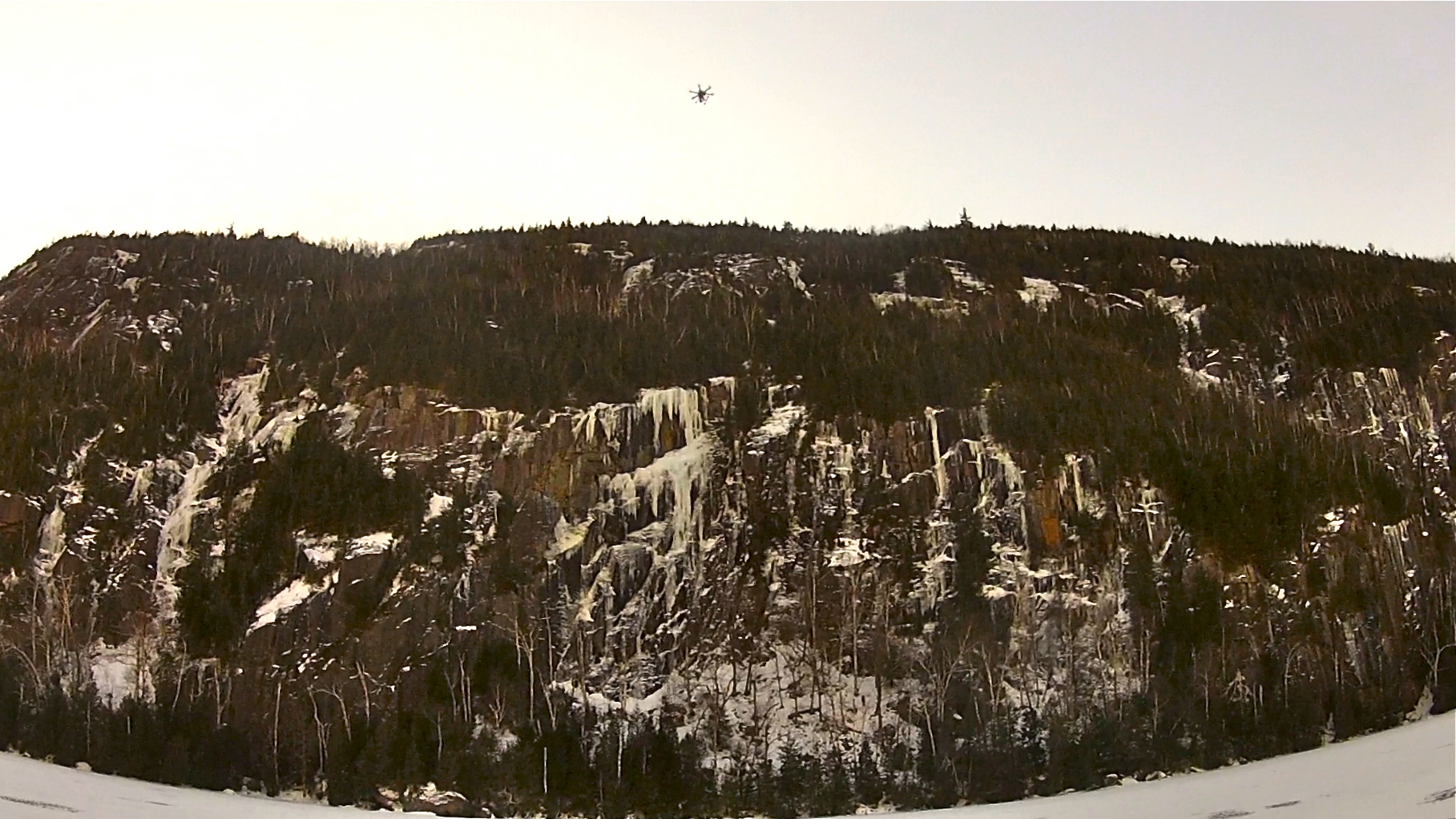 The WooKong checks on conditions at Chapel Pond

Of course, any day in the Keene Valley area isn’t complete without a stop in at The Mountaineer, whether you’ve spent the day climbing, hiking or flying, and that’s exactly what we did. 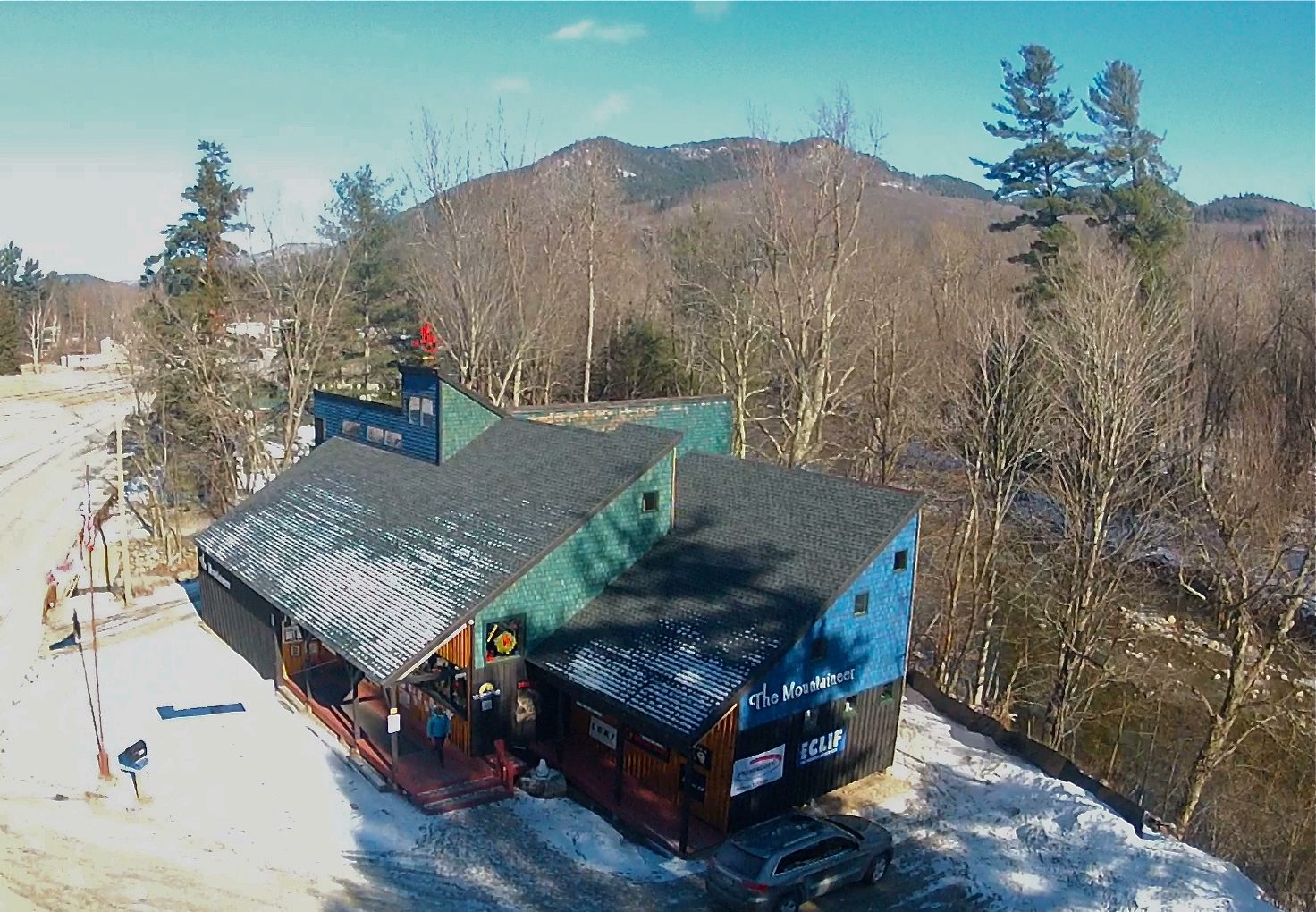 On Saturday, Doug headed to the cliffs of Poke-O-Moonshine with the WooKong while I stayed in the warm lodge doing some last minute editing to the short film we were presenting that night before the Freddie Wilkenson main event. As it turned out, some of the best footage was taken at Poke-O and I was happy to have last-last minute clips to put together. The flying was tight, but Doug took some risks, piloted well and it paid off! 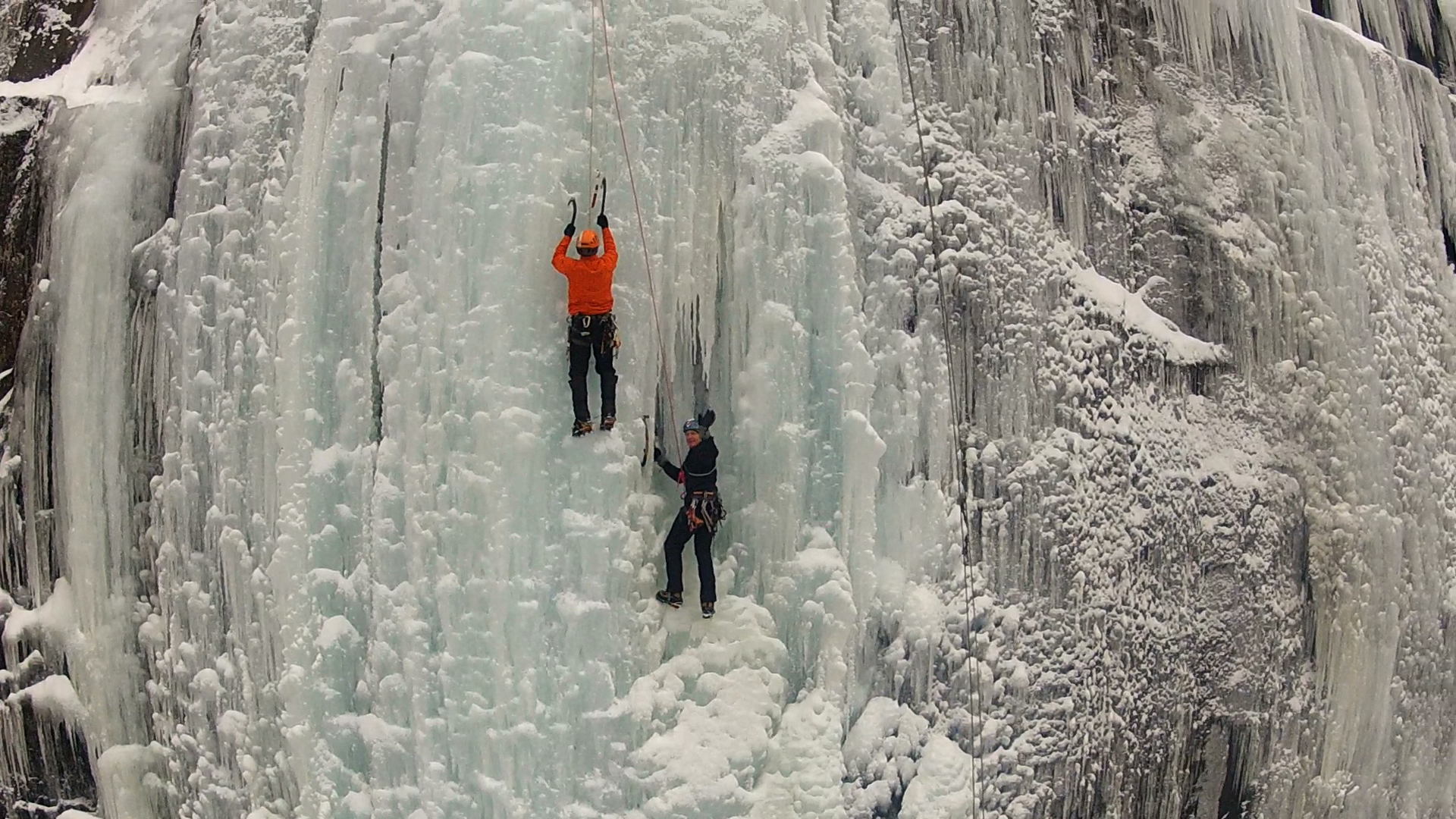 Ted Hammond waves to the camera.

We took the helicopters to the Keene Central School that night and had them on display to mingle with the climbing community. Before Freddie’s presentation and after The Mountaineer folks and sponsors tossed a lot of goodies into the audience, we showed off our best footage from our first couple of months into the project. Some of the best footage being the crashes, of course.  Always a crowd pleaser! As it turned out, Freddie’s presentation involved aerial footage as well.. on a much grander scale. His presentation of the Tooth Traverse in the Alaska Range was one of the most visually stunning that I’ve seen.

Sunday’s weather offered up wicked winds, snow tornadoes and cold temperatures. Doug checked with the flight control tower (me) and I announced the helicopters were grounded for the day. With the presentation behind us, it was time to go climbing. First, we took a hike into Chapel Pond canyon and saw everyone enjoying their clinics.  Then it was time to swing the tools myself. I had yet to climb Chouinard’s Gully, so it was an obvious choice. What an enjoyable climb. As with any classic, it doesn’t take long to see why it is a classic.

We decided to stay over until Monday and caught a couple of quick laps on the Sisters in Cascade Pass. NEice ambassador Emilie Drinkwater of Cloudsplitter Mountain Guides showed up on this bitterly cold day and climbed up the left route as we were on the right side.  Despite encountering extremely brittle ice conditions and almost freezing to death, it was perfect. 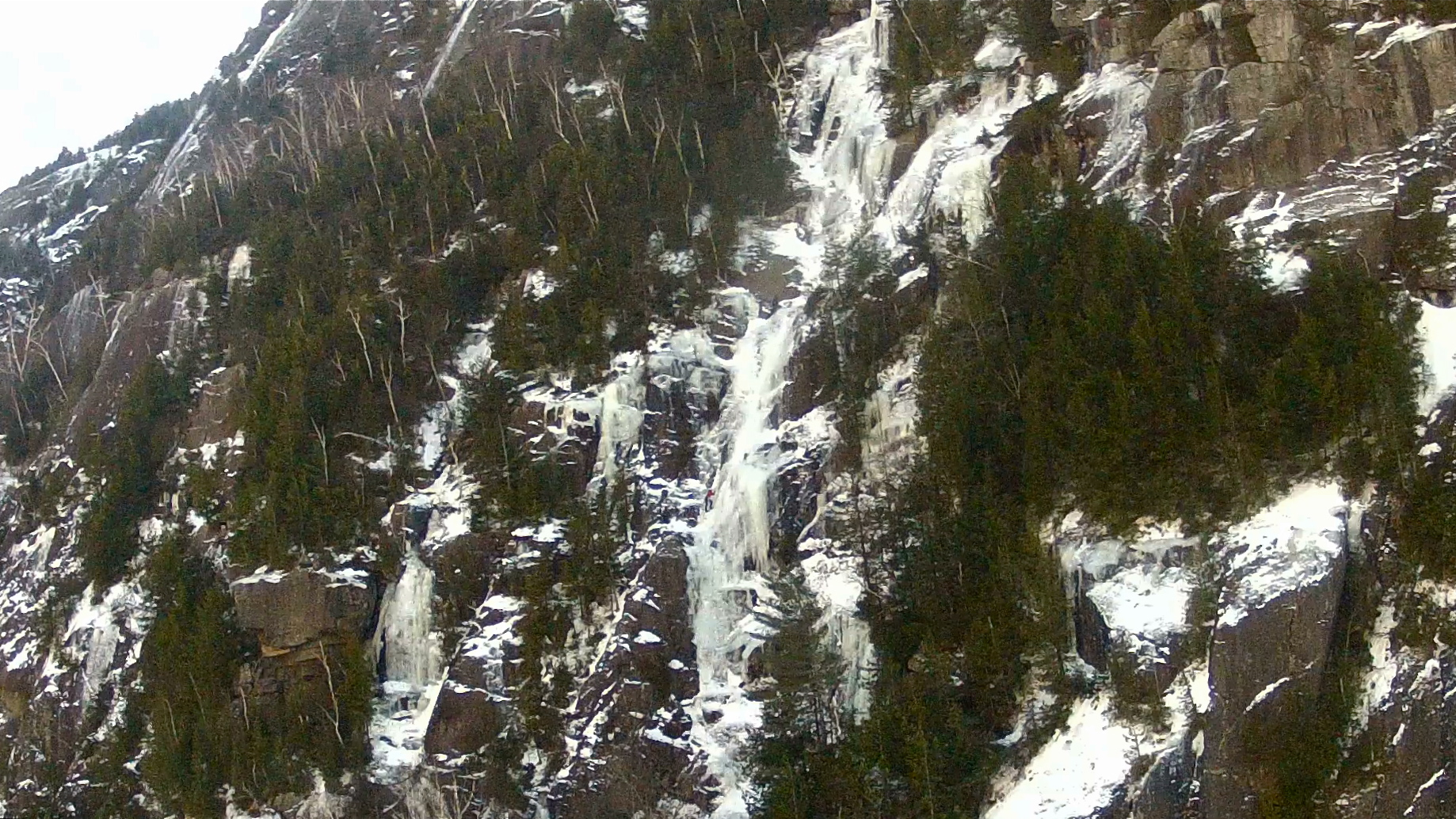 Chouinard’s Gully from the air 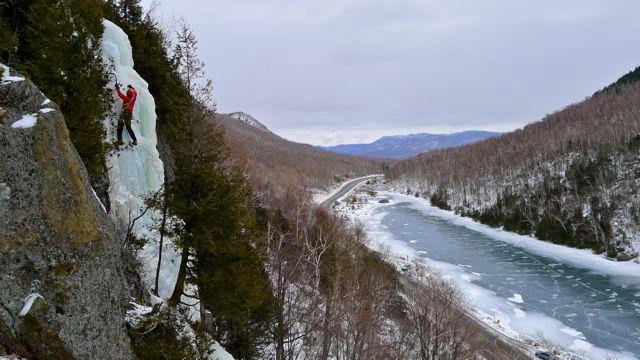 It was a fantastic weekend spent with great company, great meals and lodging, fun climbing and excellent presentations to keep that stoke going!  Thank you to everyone who stopped by to say hi and see the helicopters on Saturday night and also throughout the weekend.  To everyone I say, this is only the beginning!  UP!

In for a Tune-UP!
Scroll to top