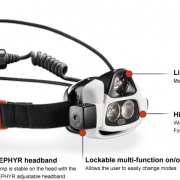 NAO is the first Petzl headlamp with REACTIVE LIGHTING technology.

Outside Magazine awarded the NAO “Outside Gear of the Show” at ORWM12. A great honor and an acknowledgement of the ground breaking technology that is the NAO.

Petzl’s NAO web site is now live, go to www.petzl.com/NAO. Here you’ll be able to view the video as well as see more information about the headlamp and REACTIVE LIGHTING technology.

Below are some early media impressions on Petzl’s NAO, it will launch in July 2012 at $175 MSRP.

“Touted to have a first of its kind self-adjusting beam, the to-be-released NAO headlamp from Petzl could be a game changer in the world of head-mounted illumination products.”
From GearJunkie: http://gearjunkie.com/intelligent-illumination-headlamp-self-adjusts-its-beam

–
“Petzl calls the technology “reactive lighting.” We call it the most high-tech headlamp we’ve ever seen.”
From Outside Magazine: http://www.outsideonline.com/outdoor-gear/gear-of-the-show/Nao.html
–
“Petzl has come out with a headlamp which will very likely alter the course of headlamp technology.”
From Backpacker Magazine: http://www.backpacker.com/winter-outdoor-retailer-2012-roundup-outdoor-retailer-roundup-steripen-freedom-bundle-and-petzl-nao-reactive-lighting-/gear/16328
–
“Once in a while, a headlamp comes around that changes the game for others. Enter Petzl‘s Nao auto-adjusting headlamp, which dims or brightens according to the level of ambient light.”
Trailspace: http://www.trailspace.com/blog/2012/01/21/petzl-nao-headlamp.html
–
Other places to go and see the NAO:
– Webpage: http://www.petzl.com/us/outdoor/headlamps/nao
– YouTube: http://youtu.be/FZb3k_x067w
– Facebook tab (you’ll need a FB account to view this): https://www.facebook.com/Petzl?sk=app_281881348531418