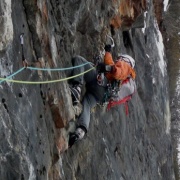 Josh shaking out and thinking about the next move. Pitch 3 of “Road Warriors” – Photo by Ryan Brooks

I had been eying the route since before the rockfall and I know that John Sykes gave it a good attempt in the huge year when the upper smear came all the way down over the bottom roof. A stunningly beautiful ribbon! I was not good enough to get on it;  after hearing that Sykes backed off, I knew that I wanted nothing to do with it and that I had no business going near it. Time passes and big chunks of rock fall. After the rockfall Joel Torretti pointed the line out and we wallowed to the base after a 3′ dump of snow. We took a look and made the usual chicken shit excuses of why we should go climb something else that wouldn’t scare us. I put the line into the files and spent the interim years getting better for it. I’d lie if I said that I didn’t look at the line every time I drove down the hill upon arriving at the south end of the lake.

This winter, on my first day out with Ryan Brooks, we climbed a couple of routes and then walked over to the base. I had too many projects for this winter already and another was the last thing on my mind, but something clicked. I got psyched. Getting psyched on a line is rare for me these days because life is so busy. We made plans on the spot to come back in a few days.

I’ve been given a lot of shit for rappelling in to clean and equip routes. To each his own, and in my opinion the end product is always a better, more thought-out line with the natural features maximized.

Day one saw us parking at the trailhead for Mt. Pisgah with the kit. After a few rappels down the wrong spot we found the top of the route. Down we went. We figured that we could climb up to the top of the big corner ground-up style so we focused on what would be the third pitch. After looking at blankinsh rock for a couple of hours, debating the use of bolts and if the line was worth it, we jugged back to the top to continue our discussion. Down again, this time with the kit. We placed and anchor and it got dark.

Day two saw us monkeying around all day on the third pitch. Down aiding, cleaning, jugging, trying moves, and finding hooks. That morning, working off a 9.2 rope (not advised), I quickly put a core shot in the exact middle while hanging in space over the big roof. A scary 15′ jug got me past the core shot and Ryan and I found ourselves clipped into 3 ropes at all times while working. It’s a tangled web we weave. That night Ryan found a core shot in his fat rope as well. We rapped the route in the dark to get a look at the big corner and fix a rope over it for future use if needed. Two guys, two days, and the third pitch was done- we thought.

Day 3. We would go ground-up. Ryan starts up the ice and at the top of the short pillar.  A rattly tool in detached ice pops, sending him toward the abyss below, only to be saved from a certain maiming by a stubby after only a body length of flight. Dramatic prose to capture a dramatic start to the day. Ryan gets back up and gets more gear in higher. The ice over the roof is thin with no good gear in sight, mostly because I only brought 4 screws for the day. Ryan down climbs and extinguishes all other options of ascent in a 50 meter vicinity. Chicken Little is up next and I get to the top of the pillar and decide that a fall pulling the roof would result in broken legs, so after another hour of debate a bolt goes in. Somehow it is dark again so we stash our bags and prepare for the send the next day.

Day 4. I ran my mouth the day before saying that I’d lead the first pitch. I have more ice screws and an El Cap rock rack. I quickly find myself at the top of the mini-pillar with the bolt clipped. Thin ice above is not welcoming but is sticky and, without realizing it, I’m perched above the roof banging in a Spectre. After equalizing a couple of stubbies I commit to an awkward mantle to a good stance. A 20′ foot traverse will take me to the corner and hopefully gear. “I’m not moving until I can protect my second”‘ I pontificate (read: I’m scared shitless that if I slip it’s paraplegic basketball for me). A couple of A3 pins and I do the shuffle to the corner, good gear, and eventually the anchor at the base of the big corner. Ryan cruses up and starts up the big corner. He is slowed down quickly by loose rock and funky gear. Side-note: Ryan is one of those weird individuals who really enjoys aid climbing and has a super solid head. While equipping routes I view Ryan as the devil on my shoulder, yelling at me not to be a sissy and space the bolts out a little more. I take note of Ryan’s slowed progress and coax him higher to avoid placing myself in the underwear soiling position that he is in. We had set one hour time limits on leading so as not to freeze the belayer too much and to spur the leader into action. Time has always been my enemy.

My turn: the onsight is blown I rationalize as I jug our fixed rope from the week before. I spend my time cleaning and adding one bolt. I lower and hand the reins to Ryan who walks the pitch. From the top of the pedestal the third pitch falls away over the lake. It’s getting dark so I attack. Hooking, feet skating off the small holds, only looking ahead to the next gear placement so as not to realize how scared I really am. I get to the overlap mid-pitch and a good rest. One more thin crux and then the ice. I ease up on the one tooth hooks only to find that a film of verglas has formed on two key edges. Shit. Up and down, up and down. I try everything and after half an hour I am completely flamed so I grab a draw and clean off the holds. I lower to the no hands stance and fire the crux onto the ice.

Had I mentioned the wind? As I climbed the ice I would get tossed back and forth by gusts. Tools would hit rock every other swing and I soon stood 15’ above my last bolt, tools staggered, pumped out of my mind, trying to place a stubby when I get hit by a 40mph gust. In a split second I’m falling and manage to catch my lower tool with my upper hand as I pass it. I swallow my puke and regain my stance. I clip a draw to my upper tool and reset my now wobbly lower tool. Adrenaline gets two bottomed out stubbies in and I try to continue up to a rock gear placement. No luck on the rock gear. My brain is fried and so are my arms. I end up down climbing instead of lowering off the stubbies and I bolt and clean the pitch. We’ll have to come back. We rap off the tree anchor at the top of the corner only to get our ropes stuck in the dark. We say screw-it and leave them, rapping off our third line that had been fixed.

Day 5. Another day is spent retrieving our ropes and gear. In usual fashion, the ropes had gotten stuck at the very base of the cliff, giving Ryan a great workout rapping and jugging to free them while I nap in the cold sun.

A week passes and Ryan gets the flu. I feel the need to add a couple bolts to make the route safer, and after talking with friends I feel that the bolts are justified and that I’m not a complete wimp. I get a burr in my ass and after work one morning I hop in the car and make the rally drive to the Lake. Six hours later I’m at the trailhead and by dusk I’m rapping in. By nine pm I’m at my car again and by 3 am I pull into my driveway. Back to work by 7:30 am the next day.

Day 6. Perfect weather: Mid twenties and overcast. Pitch after pitch pass and we soon find ourselves at the top of the cliff where it all began, nothing but smiles. We’re both stoked but sad that it’s over. I rarely remember routes but instead remember what went into them. For me, it’s the laughing, the moments of terror and the shenanigans that form memories and rarely the climbing. I feel very fortunate to have the friends that I do, as well as Lake Willoughby, in my life.