An Ice Climbers Guide To 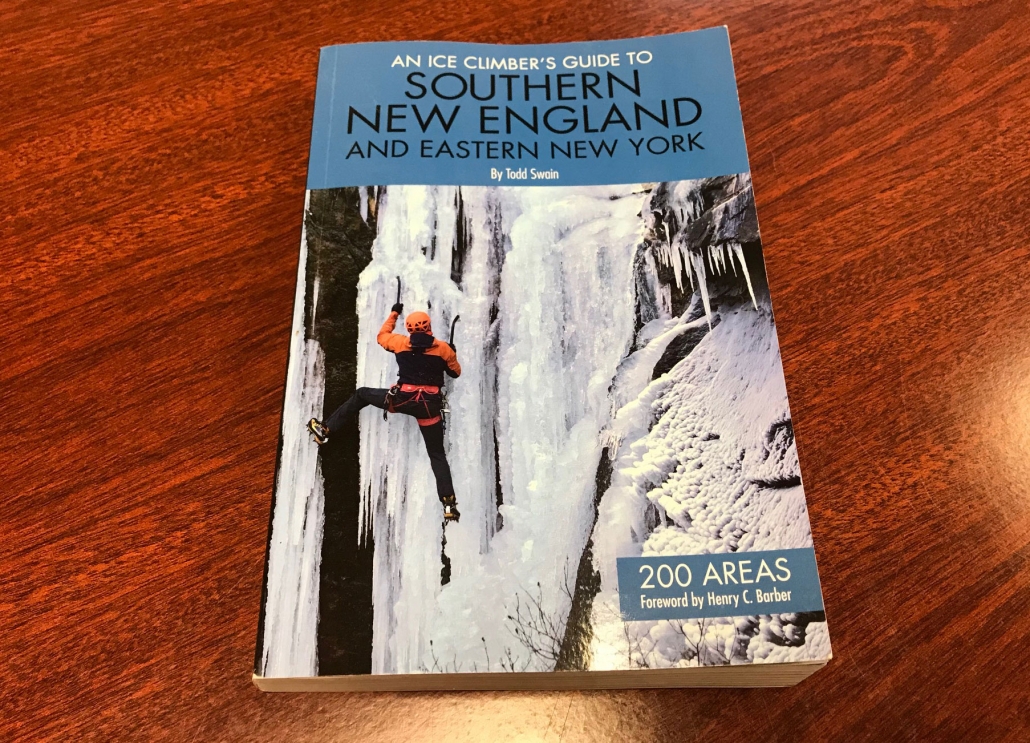 I just received my copy. This is a welcome addition to my ice climbing guides for the Northeast. It is very well done and contains lots of information on over 200 areas. It’s 496 pages are filled with photos, maps, and details on areas not well known. I hope this guide will get ice climbers out exploring, and take some of the pressure off the well-known areas.

“Swain’s embrace of all areas, worthy and worthless, makes this girthy book an effort of inclusivity.” –  Zac St. Jules

So until the ice comes in, this guide will give us something to dream about.

Some very well done maps of the climbing areas 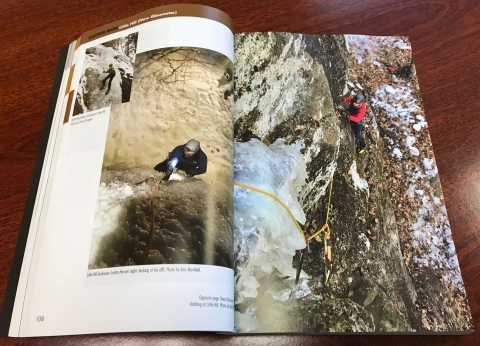 The guide is filled with lots of great color photos 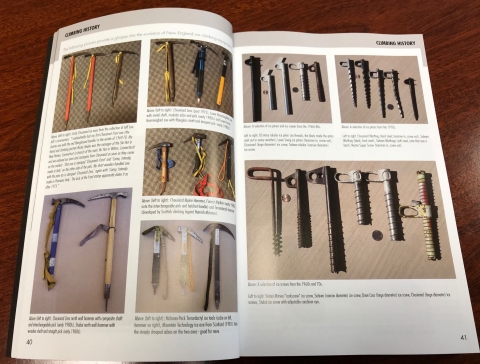 The guide has a great history section. Bold climbers back then, with shitty gear. 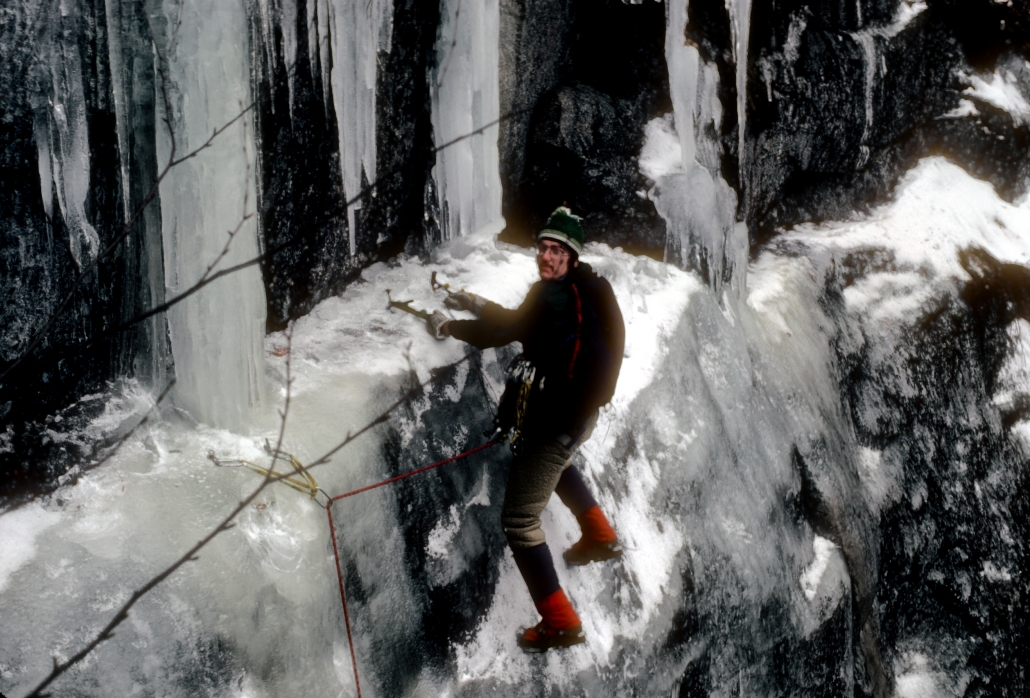 Q: Tell us a little about your history with New England – Where does New England fit into your story?
I started climbing in 1975, while attending high school in Hampton, New Hampshire. After the first few times climbing at Pawtuckaway, Stonehouse Pond and other local crags, I knew climbing was the thing I would do for the rest of my life. I subsequently moved on to climbing in the White Mountains, the greater Northeast and beyond. I’ve now climbed on all seven continents and in more than 25 countries. The ambition for all that began in New England.

Q: How long in the making has this guide been?
I wrote the first guidebook to southeastern New Hampshire in 1980. In 2008, while revisiting some crags in SE NH, I came up with the idea to put out a 30th anniversary edition in 2010. That ultimately morphed into this guidebook, which is a direct result of my (undiagnosed) obsessive-compulsive disorder. So, the short answer is the ice guide was at least 10 years in the making.

Q: What inspired you to undertake such a labor of love?
I undertook the guidebook as a research project, not a climbing project. I never had an intent to climb all of the routes or even visit all of the areas. Living in California, that was impractical. As a research project, I spent years tracking people down trying to learn of areas and corroborate information. There’s much more to learn, but this edition of the guidebook is a start.

Q: What are the exact boundaries of the guide?
The guide includes all of Connecticut, Massachusetts and Rhode Island (yes, there is ice in RI). In Vermont, the northern boundary is Interstate 89. The northern boundary for New Hampshire is roughly the Kancamagus Highway and for Maine, generally Route 302. I’ve also included a number of areas in eastern New York that haven’t been described in guidebooks previously. All told, there are 200 areas in seven states.

Q: Can you share a story that was shared with you that stood out to you while doing research for the book (surely you heard some interesting things)?
I spoke with literally hundreds of people while researching the guide. Two of the craziest stories I learned of occurred in Huntington Ravine in the 1960s. These were the days of chopping steps and poor to non-existent protection (tubular ice screws had yet to be invented). I learned of two colossal falls that occurred in gullies in Huntington. But for some amazing luck, both events should have ended very badly. Huntington is outside the scope of this guidebook, but these stories will be in the Northeast ice climbing history book I am working on.

Q: Being quite accomplished yourself, what do you think the future of winter climbing looks like in our area?
Flows (albeit small) are still being discovered in southern New England. Certainly more verglas routes will be done after freezing rain events. When talking about thin ice, I would add my voice to those that have warned against dry tooling on existing rock climbs. Mixed climbing and verglas climbing on sections of cliff that don’t have established rock climbs seems fine, but using ice tools in cracks and on handholds of existing rock climbs is not sustainable.

Q: Any other guidebooks in the works?
My wife, Donette, and I are finishing up a small rock climbing guide to the Central American country of Belize. Working with local adventure guides, we have established about 100 routes in the country and hope the guidebook spurs others to go visit this amazing place and interact with our friends there. I am also working on an ice climbing history of the Northeast as told through interviews.

Q: In your opinion, what are the most impressive lines you included in the guide?
There are some amazing routes at Hewes Hill, the Cheese Cut and Bald Ledge – all in New Hampshire. In western Massachusetts, Ralph Munn did an awesome mixed route called Eastern Standard Time. On the border of NY and VT, above Lake Champlain, are some tremendous lines done by Peter Helmetag and friends.

Q: Did you receive any negative pushback while researching and writing the guide?
Yup, but that’s always the way it goes. I’ve done a dozen or more guidebooks (the Shawangunks in New York and Red Rock in Nevada are examples) and there are always people who are persnickety. On a much more positive note, hundreds of people were kind enough to share information and photos for this project. This book is truly a community effort and everyone who contributed should be thanked.

Q: Did you need to visit any of the areas you included to help you understand the layout?
I visited roughly 50 of the 200 areas contained in the guide. As mentioned above, it was never my intent to visit every area or do every climb.

Q: Did you experience any personal ethical dilemmas in putting the book together?
There were quite a few people who told me I should not include certain areas because of access issues. As clearly explained in the introduction of the guide, I chose to include every area I learned of, whether it is currently open to climbing or not. Since the vast majority of areas in the book have never before been documented, I wanted this guide to be a historical record of what has been done. During the life of the guide, places will get closed to climbing and others will likely open. Hewes Hill, Joe English Hill and Stonehouse Pond in NH are examples of places that were closed to climbing and are now open. Supporting the Access Fund and similar organizations might lead to places like Thomaston Quarry in CT or the Allen Mine in NH being reopened.

Q: Where can the guidebook be purchased? (online and in stores)
The book is available now at International Mountain Equipment (IME) in North Conway, NH and will soon be available at other climbing shops in the Northeast. The book can also be purchased directly from the publisher, K. Daniels Publishing (www.kdanielspublishing.com).

Q: Your favorite winter climb in New England?
The first ascent I have yet to do.

Where to get the guide?

The book is available now at International Mountain Equipment (IME) in North Conway, New Hampshire. The book can also be purchased directly from the publisher, K. Daniels Publishing.

Flash Back – Ice climbing in 1986
Scroll to top