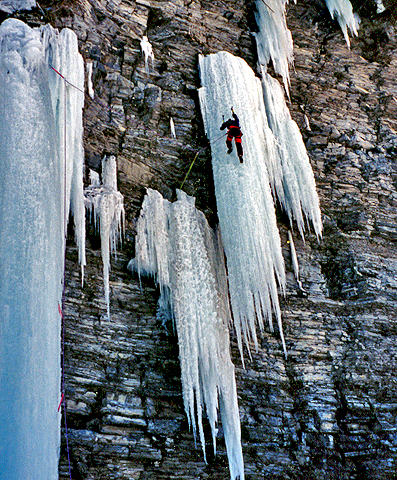 This is where it all started for me. While my wife went shopping in Quebec city, I was out in search of this Pont-Rough with its spectacular ice columns. Driving around I finally found climbers getting ready at the side of the road. They invited me to climb with them. Through a snow-covered field and then down a steep tree-filled hill with ropes to hand over hand down to the river. The gorge opened up and I was amazed! Never had I seen such ice. I spent the day climbing and learning from my new friends. That day Gilles Girard and Xavier Barbarant put up a new cutting edge climb. Upon finishing the climb Gilles asked me where I was from, I said Massachusetts. That shall be the name Gilles said. I felt so honored.

The next fall I was climbing in the Adirondacks and I ran into Ben from Quebec and he said that they were having an Ice festival in Pont-Rouge and I should come. I started to tell him about last winter in Pont-Rouge then he burst out, “you’re the guy!”. The climb was a big deal at the time.

That winter I went to the first Festiglace and that started my 10-year addiction to this fantastic Ice Festival.