Twin Fracture Gully is a deep gash that slices into the side of Marcy along the southern border of the Huge Scoop. The distinctive feature is 20’ wide and deeply inset into the southeastern aspect of the ridge. The main channel splits into dual gullies amidst roof systems at its top. As a drainage for the ridge, it is a chossy wet mess during non-winter seasons, but that sets it up for fat ice 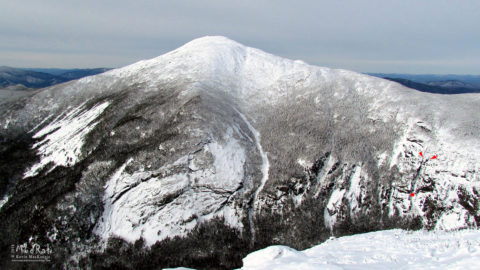 Charybdis and Scylla in Panther Gorge

when the snow flies. It’s been on my winter tick list for a few years, but the thought of trudging that far into the Gorge was unappealing for several seasons. I kept it in my pocket as a backup option in case a target line wasn’t fully formed.

Enter Laura Duncan and Brent Elliott, two climbers I met in Panther Gorge during February of 2017. They drove 7 hours to share in an Adirondack adventure. We met at the Garden Trailhead in Keene Valley at 4:15 AM on Saturday, February 17. Our primary target was a smear about 100’ north of the Agharta ice route. The potential line looked fat from afar during a January trip. I questioned whether the bottom of the curtain had touched down and, if not, whether we’d be able to find a way up to the ice. Recent rain followed by a flash freeze sparked my hopes, but longer daylight hours and the dark anorthosite of Marcy were working against it. The only way to find out was to visit.

Hard-packed trails aided with the nearly 8-mile approach to the northern pass of the Gorge. The crust off-trail wasn’t entirely supportive, but the underlying snowpack was firm enough to keep us afloat except for the occasional spruce trap. We walked out on the snowfield below the Agharta Wall 45 minutes later after some bushwhacking acrobatics in the talus. Its namesake route, and Just Nickel and Iron were fat. A blue sky and warm sun were overhead in contrast to the forecast which called partly cloudy skies with 15-20 m.p.h. winds—not good for the smear. Our hopeful line looked terrifying. Melted daggers were 15’ from the ground, and there wasn’t enough feature in the rock to climb up to their start. The middle of the smear was nearly melted out. I grumbled to myself, reset my ambitions and suggested we trek about 15 minutes south to Twin Fracture Gully at the edge of the large northern walls. If that wasn’t in, we could climb Agharta and throw new-routing to the wind.

The snowfield showed the evidence of the recent warm spell. We passed a spear of ice sticking out of the surface while descending to the Scoop. A few minutes later, we were catching our breath in the alders in the snowfield near the gully. I climbed up high enough to view the top, and my heart jumped with excitement. I could see ice capping the cliff at the end of the gully. It wasn’t simply climbable; it was fat. The 6-hour approach suddenly seemed worth the effort. I said a quick prayer for a safe climb before the action started.
Laura tied in and zipped up the first pitch. Several women have made their mark in the Gorge including Emilie Drinkwater who climbed Panther Gorge Falls (aka Grand Central Waterfall) during her historic solo of Joe Szot’s Adirondack Trilogy (https://www.neice.com/2009/03/the-trilogy-adirondacks-ny/ ). To my knowledge, Laura is the first woman to be part of an ice climbing first ascent in the area. She took the first pitch 180’ up to a bulge below the confluence of the dual gullies. It didn’t take long before she had Brent and me on belay.

Marcy enveloped us as we climbed side by side on the blue ice and through the snow. Upon reaching the anchor, we climbed another 50’ up to a stance that was protected from icefall. We assessed the options and discussed strategy. Our initial thought was to put up a single long line, but it was early, and there were two obvious choices. After discussion, we agreed that I would lead the left, we’d rappel, and Brent would lead the right. The terrain after the top was likely just a low-angle gully. 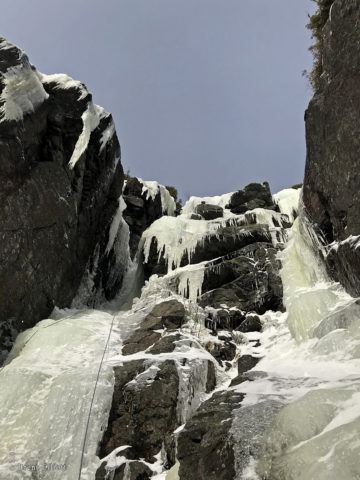 With the climbing logistics under control, I looked around and was amazed by the ice formations on all sides: ramps, bulges, smears, hanging spikes and wind-whipped icicles. The gully had some similarities to Multiplication Gully as well as Haggis and Cold Toast (on steroids). I climbed 30’ up the first bulge, placed a screw and disappeared from view into an ice-entombed chimney. A fat curtain on the right, several inches of clear ice on the left and a thick ramp underfoot set the stage for comfortable if not occasionally awkward climbing. Higher, the right-hand wall opened for an unobstructed view to the north. Large black roofs and hanging daggers were overhead. I rested in a large cave under the roofs. Curtains of ice continued north, but I planned to take the line straight up an exposed vertical curtain and into an icy constriction. Twenty feet higher, I worked my way into a squeeze chimney of freshly formed ice. The route was still building. I didn’t expect to find “plastic” during the climb since we’re usually fighting bullet ice at this elevation. I stemmed and squirmed my way into a good stance for another rest. I looked down, and Laura and Brent were back into view. Another short vertical tier led onto a bulge and into the trees. I was nearing the end of the rope, so I slung a solid spruce and set up an anchor. The length of the new route was 400’ with three pitches. It was thrilling to find such a challenging and aesthetic line to lead. 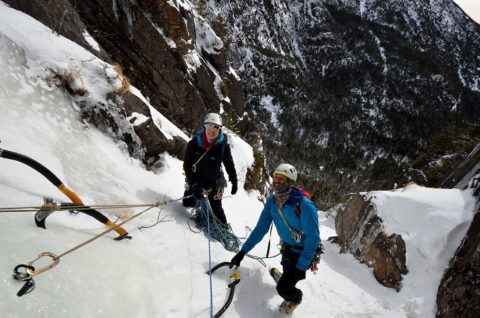 Laura, then Brent, followed. It was impossible to see her progress until she entered the upper chimney. Her smiling face popped into view and she yelled, “This is the best pitch of ice I’ve ever climbed!” That alone made my day. I love sharing these experiences with people who appreciate the rugged beauty (and a bit of suffering). Brent soon appeared as Laura took photos of him cresting the top. Instead of climbing directly to our position, he explored right to see if we should continue the line. A low angle snow gully led to another short bulge, but it didn’t seem worth the effort, so we rappelled down to the confluence and prepared to take on the northern gully.

Our warm, cozy nook turned into a blustery freezer as high-level clouds, and a moderate breeze moved in—the conditions of the original forecast. The temperature was in the single digits with windchill. Laura and I were shivering even while wearing belay jackets. She decided to rappel to the packs to heat some soup and take shelter. Brent and I remained to continue the quest though I admit that at the time I’d have been just as happy to have descended with her. I knew the climbing would eventually bring my hands back to life. I watched the cedars whip back and forth along the cliff top and shivered again.
It was easier to keep sight of the leader on this line though showers of ice chips occasionally sent me scrambling for protection against the right-hand wall. A few short vertical sections led to a ramp below a vertical curtain. The crux was at the top. A half hour later I saw Brent’s head pop into view as he yelled, “Off belay!” I tried to climb fast enough to regain feeling in my fingers. It worked just as I reached the curtain. I stopped to rest and deal with the “screaming barfies.” It was a visually intimidating arena with a few columns that had touched down and plenty of free-hanging mass. One could put up a WI5 here if they were so inclined. A line up the right side offered a more comfortable option. It had the requisite awkward exit into a dense cedar grove—classic Adirondack adventure climbing. The belay station was…intimate—what happens in Panther Gorge stays in Panther Gorge. Brent’s line was 180’ long. 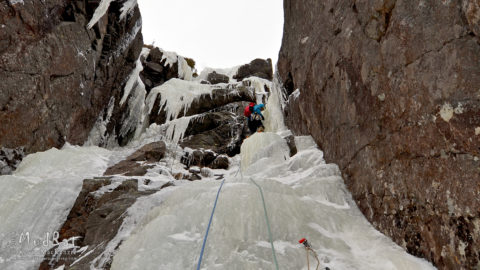 Two rappels later found us back at our packs and behind the shelter of a small ridge. Laura emerged from the trees looking reinvigorated from a hot meal. It was 4:30 PM and the waning sun looked like a soft orb as it moved toward Marcy’s ridge behind the clouds. My motivation shifted from new-routing to something more simple—bushwhacking back to the trail before darkness swallowed the Gorge. I knew the way, but trail-breaking out through the north pass in the dark is dispiriting. We slowly followed our tracks, connecting glades until we reached the Panther Den at the top. Here we diverged from our entry path to avoid the talus in the center of the drainage. By Tooth and Claw (a route Bill Schneider, Devin Farkas and I added in 2016) was in thin but climbable condition. This is another reliable route when other lines are delaminating. Several new possibilities including what looked like a WI6 on the Panther Den’s prow were in as well. 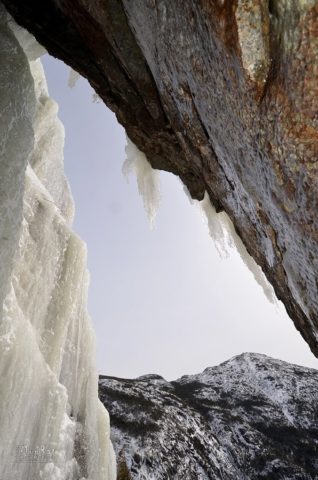 The off-trail situation became humorous during the final push from the cliff to the Phelps Trail. Laura broke trail for a bit and did a fine job of finding the powder stashes which brought her to a screeching halt on some of the steeper slopes. Brent quipped that she was a skier at heart. At least I knew where not to step. It was around 5:30 PM when we reached “civilization.” With 8 miles to go, the day was far from over.

We named the routes Charybdis (WI4/400’) and Scylla (WI4/180’) during a discussion at Slant Rock. Twin monsters of the deep Gorge seemed appropriate and Laura liked that Scylla is depicted as a female in Greek mythology. A warm fire at Johns Brook Lodge seduced us into another rest. In the end, we reached the trailhead at 10:30 PM after roughly 18 hours over as many miles—a full day, but appropriate for the route location and snow conditions.

The number of named ice climbs on Marcy and Haystack has grown from a single backcountry classic, Agharta (ca. 1999), to 14 routes as of 2018. The grades range from WI2 to WI5-. Additional details may be found at:

Fire on the Cote-Nord
Scroll to top