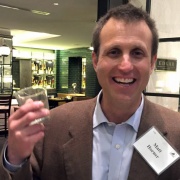 Every year the AAC recognizes outstanding achievements in conservation, climbing, and service to the climbing community. This year the awards were presented during the AAC’s Annual Benefit Dinner weekend, February 26–27, 2016, in Washington, D.C.

Local Northeast Hard Man Kevin Mahoney was given the The Robert and Miriam Underhill Award for 2016. His name now resides with such great climbers as, Yvon Chouinard, Jeff Lowe, Fred Beckey, Henry Barber and Steve House. Way to go Kevin!

Kevin with an empty glass after receiving his award. Someone give this man a refill. Wait, is this Matt Horner? 😉 – Photo: Matt Horner,  Face Book

The Robert and Miriam Underhill Award is given annually to that person who, in the opinion of the selection committee, has demonstrated the highest level of skill in the mountaineering arts and who, through the application of this skill, courage, and perseverance, has achieved outstanding success in various fields of mountaineering. This year’s winner, Kevin Mahoney is a lifelong climber and mountain guide with a wealth of experience in Alaska, the Indian Himalaya and Europe. He was nominated for the Piolet d’Or for his new route, Arctic Rage on the East Face of Moose’s Tooth in Alaska which he completed with Ben Gilmore.

Kevin resides in Richmond Vermont with his wife Claire and two daughters Annika and Eliza.

Kevin worked rock climbing and mountaineering courses for the National Outdoor Leadership School for six years averaging 30-40 weeks a year in the field. So after college where Kevin had discovered his new passion for rock and ice climbing, he was now living his dream of spending more time in the backcountry than not. This is where Kevin became a teacher. Experiential education was the name of the game at NOLS and facilitating individuals’ learning experiences was as important as the technical skills being taught. This is where Kevin was the example. His leadership skills, his judgment, and his knowledge of the mountains were all scrutinized everyday, all day.

To support our shared passion for climbing and respect for the places we climb.

A united community of competent climbers and healthy climbing landscapes.

Everyone who loves climbing.

Authoritative climbing information, knowledge and resources benefit and inspire us and future generations.
Advocacy and leadership advance our climbing interests and promote conservation.
Community and competency strengthen and embolden us to push our limits.

Solo at The Lake
Scroll to top