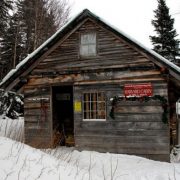 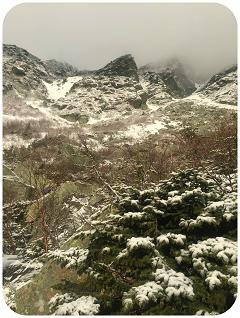 In celebration, The white mountains have been turned green! But, don’t worry, there is still plenty of skiing and climbing to be had before we let all the ice fall down. Sure, it’s been raining like the Emerald Isle, but with what little luck we have had this season we are psyched for this weekend’s forecast – SUNNY AND COLD! This might be the last time, if not the first time, you will have felt ol’ jack frost all Winter. So, why not try your luck at a chance for thescreaming barfies? Come defy the winter that wasn’t, grab the fat bastard and file away a seasons worth of anticipation, come climb and ski some of the last snow and ice remaining in the northeast.

With superfluous amounts of water draining from the mountain along with plummeting temps, you might even consider scratching around a buttress or two this weekend. This will be a fun few days on the mountain. Right now, it looks like we could have a 72+ hour reprieve from the persistent melt-out we’ve been dealing with over the last two weeks. We could even pick-up a few inches of snow over the next couple of days, which would help to cover up all of the green decorations. 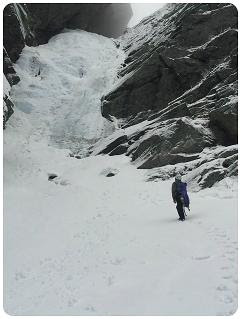 With the low snowfall this season and above normal temperatures, Trails on Mt. Washington look like you might expect in May. Tread-way on the lower 1/3’rd of the Tuckerman Ravine trail between the trail-head and Hermit Lake is comprised of mostly mud and rock.

The remaining 2/3’rds is mostly melting ice and snow. TRACTION IS REQUIRED! The ice has become much more manageable in recent days as temps have soared. This is an improvement over the nearly bullet-proof and contiguous sheet of protectable ice that has made the Tux trail a viable water ice adventure for most of March. No exaggeration, V-Thread practice was possible on the the Tux trail some weeks. Think I’m kidding? A couple of weeks ago, Snow Rangers felt the need to perform technical lowers of snow machines in order to get them safely back to their summer berths. It’s been a tough winter, but Spring has sprung and conditions are improving as they degrade. Come enjoy what remains!

The Huntington Fire Road is mostly snow covered and should be so through the weekend and beyond. The fan hasn’t really changed too much from what is has been most of the season. Travel towards your gully of choice remains mostly summer like. Snowfields do still exists on the upper portions of approaches to O’Dell, Pinnacle, Central, and the Yale Buttress. 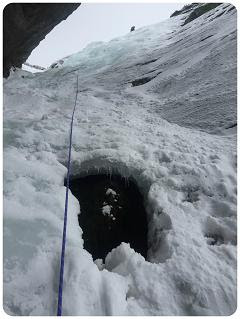 As far as ice conditions – O’dell and Pinnacle are hanging tough. Ice/snow above the first pitch of Pinnacle has really taken a beating in the last few rain events. There are climber-sized holes in the snow and ice caused by excessive water draining on-top of the ice during monsoon-like events. With the potential for new snow fall tonight, Friday, and Sunday, I would be mindful of possible snow-bridging that could occur in the gully, particularly above initial steep-ice pitch. Slipping into a water-fall t 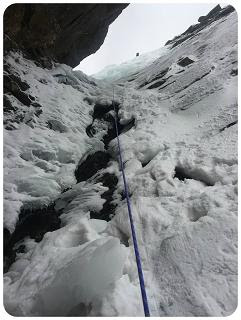 hanks to a hidden manhole could be unpleasant.

Portions of Pinnacle above the main ice flow will become more difficult to protect over the next two weeks. Thankfully, I believe melting will slow significantly over the weekend. If you were hoping to climb Pinnacle before the season is out, I would consider doing so in the next week.

Thanks to Eric Winter and Jake Kenealy for the great photos taken earlier today in Pinnacle. Eric and Jake live and work in Vermont and are totally stoked for skiing and climbing in the East. Sure hope to see more of these guys in the future! 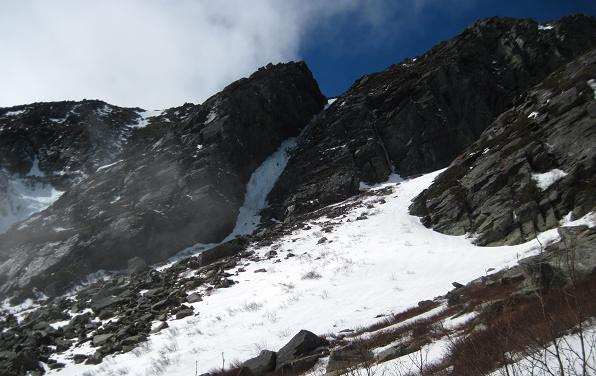 While I’m not definitely not one that welcomes the crowds that come with a spring snowpack, we are definitely in the period of persistent isothermic snow. In other words, the spring corn cycles have begun. Besides the obvious ski lines over in Tuckerman Ravine, there are some manageable turns to be earned in Huntington Ravine at the moment. The forecast return of freezing temps might keep skiers out of the steeps this weekend, but once we begin to warm up again the experienced ski mountaineer might find some worthy turns in the upper stretches of O’Dell, South, and maybe Escape. None of which, are offering top-bottom skiing, unfortunately. As always, there are plenty of turns high-up on the summit cone, but don’t expect to make it down to the ravines without first removing your skis. Better luck next year. 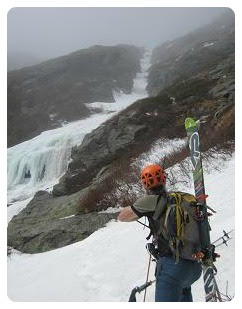 On Wednesday (March 16th), I had the pleasure of making a very vegetated approach into Diagonal Gully (Huntington) for a very nice snow climb followed by a fantastic ski descent. It certainly wasn’t the best conditions I’ve ever experienced in Diagonal, but it skied about the best I can remember as a result of the stable snowpack. It was quite pleasant to charge hard! I was skiing with Sarah, Hermit Lake Caretaker, a super stoked skier and climber! We are looking forward to having Sarah in the drainage again next winter again, for sure!

After some tight turns in Diagonal, it was time to boot back up to the ridge and head over the Tuckerman for a surprise two-ravine day. I wasn’t sure it would happen this season, citing mountains condition and motivation problems. We considered dropping into Right Gully, which has been fun this season, but it never really filled-in the way it normally does. As Sarah pointed-out as we wandered across the Alpine Garden, “Skiing Right Gully would be like voting for Trump; Doing so probably wouldn’t effect the election, but it would be a crappy thing to do.” Coincidentally, we decided to head over to LEFT Gully, where we launched off the top and skied some truly hero snow all the way to the mouth of the ravine. That run alone seemed to make-up for an extremely painful and frustrating season. Not only that, it put a the wrapper on a fantastic day on the mountain! I predict we have only a few more similar days left in the season. It’s already skiing like May, so you better hurry-up and get here. Come prepared and stay safe! Keep an eye on the  avy report for daily condition reports. 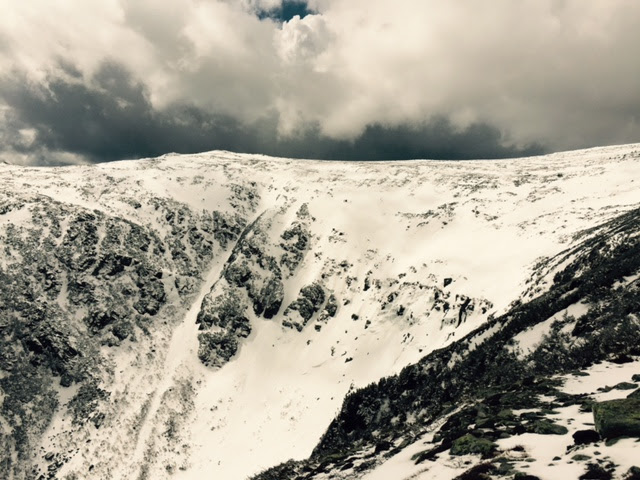 As a reminder, Ted Carman will be spending the weekend (March 19 & 20) with everyone at the Harvard Cabin. In no uncertain terms, Ted is the Father of the Harvard Cabin. He built the place. He got the permission, he did the fund-raising, he had the itch that had to be scratched. He drew up the plans, literally, in his dorm room. He then went on to recruit volunteer labor and got the supplies uphill. Not bad for a  college kid. Following his time as a Naval Officer, Ted went on to a career in non-profit community development. It’s no surprise that the construction of the Harvard Cabin is still listed on his CV.

I was hoping the mountain would be more winter-like for Ted’s return. Luckily, it does seem like the forecast calls for the most winter-like weather we’ve seen in weeks. You can help fill-in the gaps by bringing along a rope, rack, a partner, and your love for the Harvard Cabin. Please consider coming up and spending the weekend with Ted. If you can’t make the overnight but are on the mountain – Please stop-in and introduce yourself to the guy we all owe a great deal of gratitude, if you don’t mind my saying. As you might have guessed, he’s a pretty interesting and lively fellow. Click Here for the complete story of how the cabin came to be.

Hope to see you this weekend, 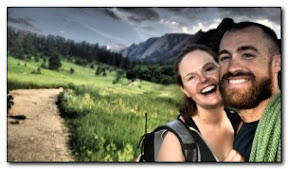 NOTE – Harvard Cabin is not affiliated with the Appalachian Mountain Club. Harvard Cabin is maintained by Harvard Mountaineering Club for use by the general public. The cabin is operated under a special-use permit granted by the USDA Forest Service. Cabin space and tent-sites are available on a first-come, first-serve basis between December 1st and March 31st each year. Specific instructions for staying at the cabin can be found online at http://www.HarvardMountaineering.org/cabin

A Snowy Day
Scroll to top