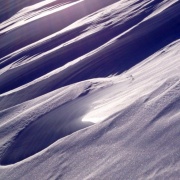 I awoke with tired legs from a long ski tour the day before.  It felt lovely to shuffle around a warm apartment , pour cup after cup of coffee and relax on the sofa with my girl.  However, a glance at the Mount Washington Observatory’s addictive “current summit conditions” page caused me to sit forward.  The wind, howling yesterday, was down to single digit speeds.  And the clouds that wreathed the ridge had given way to “130 miles” visibility.  The summit temperature was even above zero Fahrenheit!  I had to go.

I have hiked, run and climbed on Mount Washington and its environs many times over the years.  I always feel a tension between comfort on familiar terrain and giving the devil his due:  It can certainly be an extreme environment, one in which more than a few fatal mistakes have been made.  So despite the blue sky, I felt like a bit of a blasphemer when I rolled into Pinkham Notch and shouldered my pack at a leisurely half past noon. 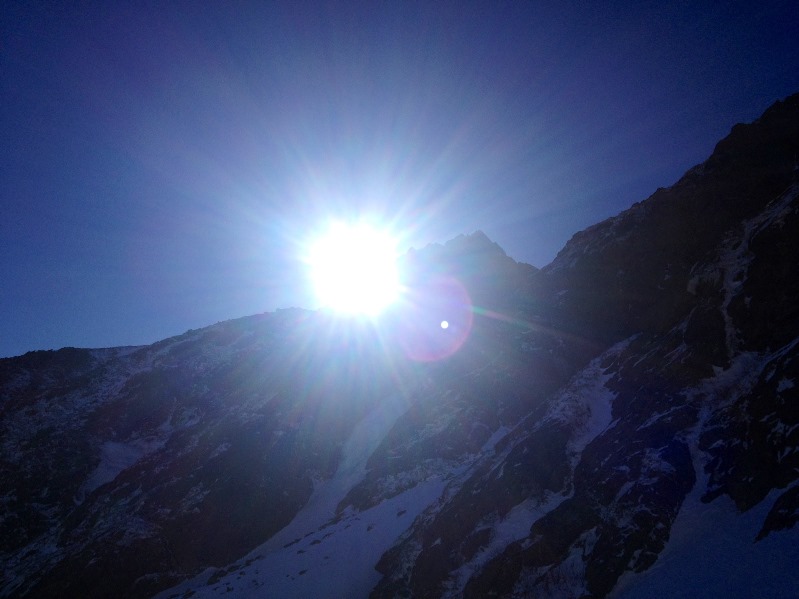 light though, and the conditions were perfect.  A nicely packed trail allowed easy progress toward the ridges, slopes and buttresses above.  The last time I’d been there, the trail sported a less hospitable surface of rain-gouged ice and rock, but today it offered a dense, smooth snowpack.  Microspikes and poles weren’t really necessary, but gave extra confidence and allowed me to set a rapid, shuffle-step pace.

Higher up the trail I turned right toward Huntington Ravine, having encountered just a few souls on the “Tux” trail.  After passing Raymond’s Cataract and its grand boulder, I leaned into the slope and quickened my pace, anticipating my first glimpse of the ravine’s gullies and rock walls.  The trail swung around a corner, and sure enough, that first glimpse did not disappoint.  I’ve stood in the same place many times in many seasons, but it is always a thrill to look up into that austere cathedral.  On the left, Odell’s Gully bulged with blue water ice.  Next came the stacked stone diamonds of Pinnacle Buttress, hiding its eponymous gully from view.  The gigantic dihedral of Central Gully sat atop the apex of the fan.  Right of Central, ribbons of ice and snow coursed down the ravine’s proud north wall.

In the winter, more often than not, I’ve paused to take in that grand vista and felt the first blast of icy wind rolling down from the ravine, foretelling tough conditions and more layers for the rest of the journey.  On this day, the air was still, clear and so very quiet.  I heard two voices echo faintly from the top of Yale Gully, but could not see another living sou

As I weaved among the boulders and began to ascend the canted snow of the Fan, visions and impressions of other visits passed through my mind.  I thought of arriving at the same point in a frigid, swirling wind, halfheartedly swinging a tool into the ice, then turning around and trudging downhill toward safer ground.  I thought of the day my friend Alan and I bent our heads in the middle of Yale Gully and slurped water from the ice, relishing the unexpected gift during a marathon day.  I thought of the day I emerged from the confines of North Gully and let the scouring wind push me northeastward toward the auto road.  And inevitably, as I looked up the long line of Damnation Gully, I thought of my friend Ned- his slow-motion, tumbling fall, and the state of grace I hoped he’d felt at the end of his life.  In my mind, I was able to justify the risk of the endeavor I was about to undertake- climbing an alpine route alone and without a rope- by noting my levels of comfort, strength and skill.  Also, I said to myself, “I’m doing the same thing but not in exactly the same place as Ned,” as if somehow my loved ones would be any less angry and heartbroken if I met a similar end.

Flawed thinking perhaps, but standing at the base of the bulging icefall below Yale Gully, I felt… Calm.  In control.  Prepared.  Focused.  Happy.  Reverent.  I quickly transitioned to ice tools and crampons, donned helmet and extra layers, and got to grips with the climbing.  The ever-changing surface held my attention, as the thick bulges were variously glazed with brittle ice, sun-rotted snow or alternating layers of both.  I focused on absolute security, to the extent it existed, by testing and carefully inspecting each tool and crampon placement.  As I ascended my intended line of ice flows just south of Yale Gully, the least secure moments were actually transitioning from the ice to pockets of stunted spruce and unconsolidated snow.  But I found my way past various obstacles and made steady progress, soon arriving back in the horizontal realm of the Alpine Garden.

The sun still shone, the quiet still echoed, and I still felt the fire inside, so after a brief pause, a few gulps of liquid and a glance at the time, I shouldered my pack and moved up the slope toward Nelson Crag and the summit.  Banks of sastrugi, wind-sculpted snow, slowed my progress but entranced me with their arching, graceful patterns of shadow and light.  Toward the top of Nelson Crag I wove among rocks and caught sight of the proud sentinels that make up the northern end of the range.  Hidden from view, on the far side of these masses of stone, lay the ashes of a loved one felled by cancer.  I thought of a small jar of ashes on my mantle, of a loved one felled by drink, waiting for a suitable resting place.

Simultaneously I came into the wind that accelerated as it was compressed over the summit cone.  It seems silly looking back on it, but in that moment it came as a rude shock that six degrees Fahrenheit was still cold when you set the air in motion.  I was acutely aware of my own insignificance and frailty in this place.  I felt the cold sting my skin and sap my energy, donning a balaclava before quickly striding on to the summit.

It was strange to know that just on the other side of the metal, glass and concrete walls of the observatory, other people went about their tasks in comfort and safety.  Yet, I felt entirely alone, atop a cold and unforgiving landscape.  A holy place, its ridges dropping away like flying buttresses, cairns marching like rows of squat gargoyles.  As I acknowledged the privilege accorded to me, I felt the yawning space between my perch and safety.  The cold wind bit, the sun sat low in the sky, and I felt the weight of my responsibility to my young son and loved ones. 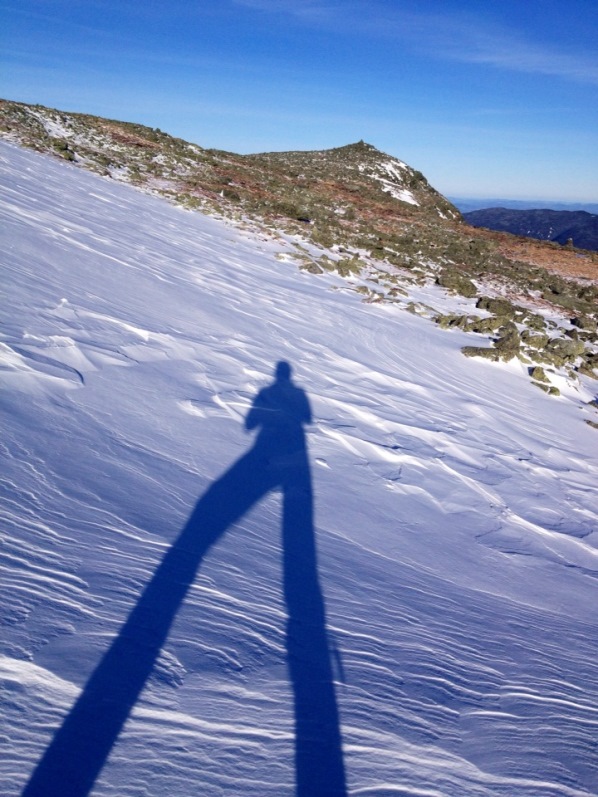 And so, with one more look around and one more silent prayer of gratitude, I plunged downhill toward Tuckerman Ravine and the Lion Head ridge.  Racing across the ridge, I appreciated  shifting views of the huge, beautiful features of the mountain.  Meeting the treeline, I plunged into the forest and peeled off my balaclava.  At the foot of the ridge, I paused to eat, drink and breathe a sigh of relief- I was safe.  With miles to go and light left in the sky, I was home.