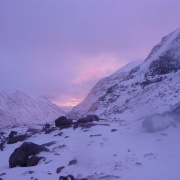 Arch Enemy – Scottish V,5… it should be pretty moderate with good gear. 2 hours, 150 feet, one stopper, one shitty spectre at 80 feet threatening to torque out of the crack if it takes a fall, and a hard-fought hex at 110′ or so… Steep sugary powder, shitty sticks, feet threatening to disintegrate and send me tumbling, and that questioning feeling of “is this going to fucking hold?” with every swing and every kick. I climb at least half the route blind, alternating between glasses on and off at least 15 times as my face is sandblasted by 40mph winds and spindrift. 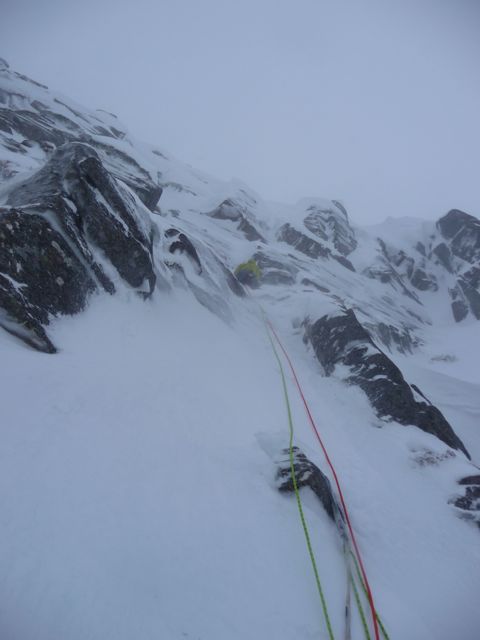 It’s no wonder the Brits kill it in the greater ranges. The approaches are long, the ice quality is shit, the pro is hard-fought, and the weather absolutely blows. And this is on the nice and easy days!

It’s important to note I didn’t say “ice climbing” here, because my first day out, and the whole trip in general, highlighted that Scottish winter climbing is NOT ice climbing as we know it. You’re not going to find waterfalls to rival the Lake or Poko in Scotland. Instead you’re going to find verglassed rock, rime ice, turf, and good old-fashioined mixed climbing. In essence, you’ll find a bit of everything you’d find in the greater ranges, all packed into Scotland’s short, yet impressive mountains.

Day One: The Obligatory Visitor’s Sandbag

The first day was about introductions – getting to know Stuart, my host, and getting a feel for what climbing in Scotland would be like. With high winds and some dangerous avy conditions forecasted, we decided to stay local and hit up a relatively new crag in the Cairngorms called Cha No. From the onset I knew I was in for it… as we ascended and turned a corner, the wind just tore at my face. All I could think was “I really wish I hadn’t shaved my beard!” 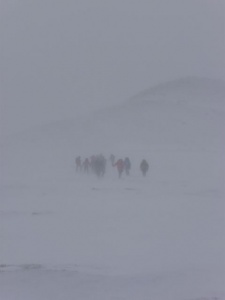 Rapping into Cha No gave us some respite from the wind, which we of course wasted by turning the corner and starting up Arch Enemy. Nearly 2 hours of groveling ensued, eventually digging through the cornice and secure ground only to be entirely in the path of the wind. I really wish my goggles weren’t securely stowed in my pack at the top of the rap-in point.

The rest of the day was cake: We stayed out of the wind, climbed some cruiser moderate lines, and made it back to the cars just before dark. First at the cliff, last to leave – a sign of a good day of climbing! 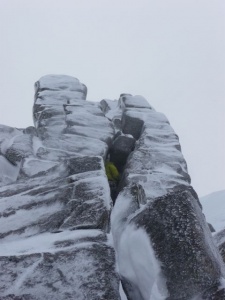 One of the unique things about Scotland is that you need to earn your climbing. Approaches of an hour and a half are short in Scotland. Day two saw us driving to Glen Coe (some 2+ hours from the Glenmore Lodge where we were staying) to head up to climb at Stob Coire nan Lachlan (I doubt this is how you spell it, but another thing about the Scots, they don’t speak the same language as we do!). It’s about a 90 minute uphill hike into the “Corrie”, unless you head up the wrong valley first!

Fortunately, we didn’t get too far up the wrong valley and only added about 40 minutes of walking to our day. Once in the proper Corrie (probably around 11am), we found parties on nearly everything, but we timed it well enough not to have to wait too long for one of the classics in the area – Scabbard Chimney. Unfortunately, we didn’t really find the chimney – too much snow and ice! Instead of pushing ourselves and seeing how Scottish grades really related to what I was used to here in the US, we just had a quick romp. 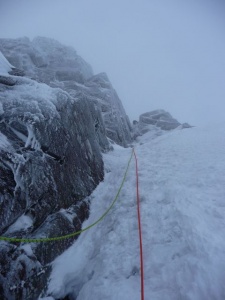 We then did another classic line – Ordinary Route. Again, deep snow and a lack of gear added a little bit of spice to the occasion on otherwise quite straight-forward climbing.

There is one mountain in Scotland that does NOT involve a long approach: Meall Gorm. Two and a half hours of driving saw us at the base with only a 15-minute approach between us and the cliff. 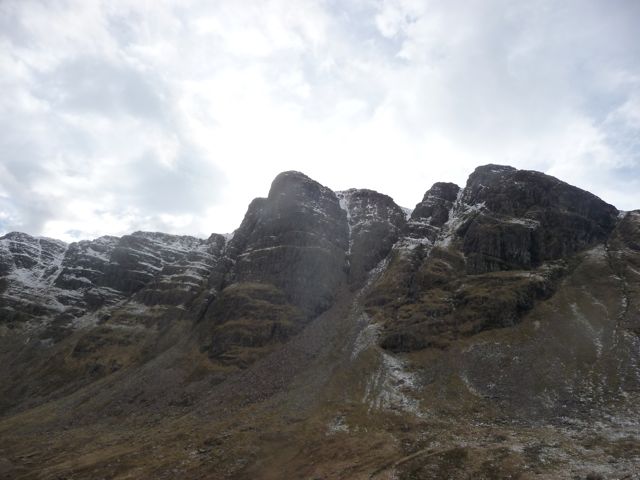 Unfortunately it also saw temperatures at about 5 degrees celsius and nearly a complete lack of winter conditions on our intended lines. Up the soggy gully it was to make sure we got some climbing in! 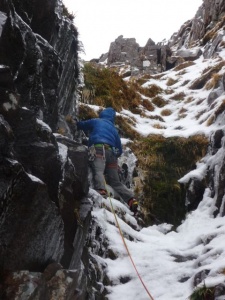 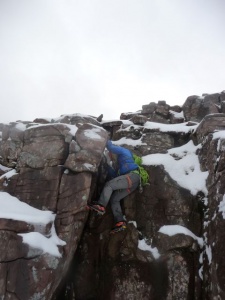 How you salvage a day… drytool soloing of course!

For the second half of the week I’d be climbing with a new host, Martin. We met up Wednesday night after Nick Bullock’s hilarious slideshow (of which his exploits on Cathedral last year were a big piece) and Martin had a brilliant plan in store: the Central Buttress of Ben Eighre (pronounced “Ben-A”… have I mentioned that the Scots can’t spell?). 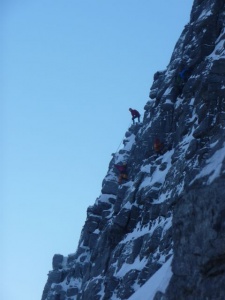 Off it was to the classic moderate West Buttress route while the the masses waited for the lead party to finish a 3-hour lead on the crux pitch of Central! Suckers! 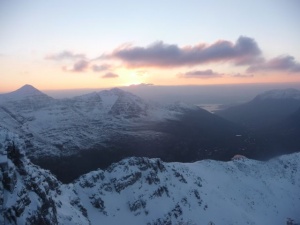 From the top of the West Buttress

Day Five: Have I Mentioned that Scottish Weather is Crap?

Forecasted 90-100 mile winds across the Scottish mountains, and rain. What is one to do? 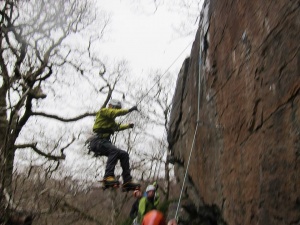 Drytool of course! Nothing like a 4 meter fall on a 6 meter route to get your day started! Or to lose grip on your tool, have it fall, hit you in the helmet, and then tumble 100′ directly at your belayer who is tied into a tree! Good thing for gri-gris! And who invited the jackass American to the crag?!

Somehow, my crampons nearly skewering his neck and my tool nearly eviscerating him the day before didn’t convince Mark that I was a liability, so he invited Martin and I to join him and his guest for our final day out on the Meet. Our goal, a four-star ice route in the Ben Eighre area called Poachers’ Falls. 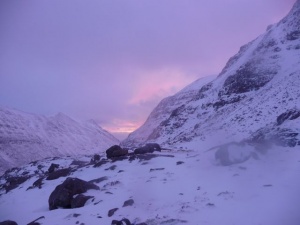 Poachers’ isn’t particularly hard, but true waterfall ice is somewhat rare in Scotland, and what it lacked in steepness, it made up for in setting: 3 pitches of fun climbing overlooking Ben Eighre, the mountains of Torridon, the North Atlantic, and the Hebrides. Combine this with a great partner, and another party of good people on the route, and you have a great cap to an amazing trip. 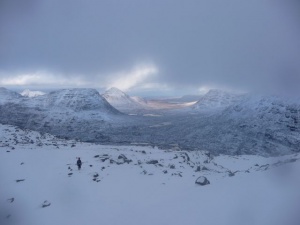 Views coming off of Poachers’ Falls

The International Winter Meet was a fantastic opportunity to meet other climbers from around the world, share in a common love of winter and suffering, and learn a thing or two about how this crazy sport we all love came about. If you have a chance, head over to Scotland: the ice is crap, but man, the climbing is awesome, and the local climbers are a blast to share a rope with!

Will Mayo Puts Up M14 at Vail The Little Expedition That Could: Climbing Untouched NH Ice
Scroll to top