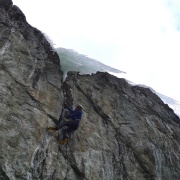 Another Adirondack Mountainfest has come and gone.  As always, it started with a joke from Vinny and ended with many things to toast to with some good bourbon.  What happened in between?  Well, all weekend, clinics were going on, gear was being demo’ed, ice, snow and rock was climbed and kegs were tapped.

There were an array of classes going on from an Avalanche Intro Course with Chuck Boyd, Slide Climbing with Jeremy Haas, Colin Loher and Chad Kennedy to Climbing a 1,000 Feet of Ice with Jesse Williams to Snowshoe Mountaineering with Carl Heilman.  And of course there was learning steep ice, thin ice, hard ice and every kind of ice with great guides and overall great people like Ian Osteyee, Don Mellor, Matt Horner, Matt McCormick, Jim Pitarresi.. need I say more?  We were excited to welcome Vermont’s Andrea Charest, fresh out of Ouray to attend her first Mountainfest!  She took both beginner and advanced climbers out for clinics on both days. I’m sure she will be back!

Some interesting lines for everyone to learn on!
Photo by Andrea Charest

Friday night kicked off with Aaron Mulkey’s presentation.  He is a Wyoming based climber and Rab athlete.  He is also the owner and author of the website Coldfear.  Check it out and you’d wish you’d been there for the show!

On Saturday, the temperatures warmed up, the sun was out and the winds were calm.  I had grabbed a pair of Altai Hok skis from our friends at The Mountaineer to demo that day and the only decent snow cover I could find was at Whiteface Mountain!  Very un-Adirondack like.  I was really impressed with the skis.  They are a snowshoe/ski hybrid with built in skins.  The universal bindings resemble snowboard bindings and they fit my climbing boots perfectly.  I took a few laps on the bunny hill and was surprised how well I could maneuver them.  They will be great approach skis. The Mountaineer is the only shop on the East Coast of the US where you can try these out before you buy!

Doug took advantage of the calm weather and headed to Cascade Pass to fly the NEice air fleet.  He came with three helicopters and left with two!  Yes, a big crash and his “power model” had disintegrated to a pile of broken electronic parts.  But not before getting some footage!  And with another more reliable chopper in his quiver, we had fun buzzing the ice around the Pass.

Saturday night was Vince Anderson’s show at the Beaverdome.  After some awesome free stuff was thrown around and raffle prizes given away by The Mountaineer and the sponsors, Vince chatted about his time on the Rupal Face of Nanga Parbat with Steve House.  They summited the 8125m peak via a 4,100m route in one single non-stop six-day ascent, followed by another two days of descent. The climb took place in 2005 and they were awarded the Piolet D’or for their ascent.  Badass.

Eric and Jason ready for the rappel down.
Photo by Naomi Risch.

Alex laughs through this first experience with screaming barfies

After the clinics left to climb on Sunday morning, Outdoor Research guru, Naomi Risch and I had a day out with three other company reps in Green Gully. For the Patagonia rep, Alex, and Marmot rep, Jason, this weekend was their first time ice climbing!   Also joining us was Eric with Scarpa.  Everyone was psyched to get out and despite the scrappy ice conditions, we had a blast climbing a couple of pitches before we had to get back for demo returns.

While we had a party of five in Green Gully, Kevin Mahoney returned to Exit 30 crag with Doug Madera to give the Fecalator another go.  The Fecalator in the Adirondacks, possibly the country’s first trad M10 WI6, was put up by Chris Thomas almost ten years ago. As Emilie Drinkwater reports, it’s only seen a few ascents by very talented and very determined climbers.  Kevin and Bayard Russell had spent some time on Saturday flirting with it.  On Kevin’s first try on Sunday and third overall attempt, he fired it!  Yeah Kevin!

Sunday night was Doug’s presentation on the history of this great website, NEice, and appropriately titled “Oh What a Long Strange Trip it’s Been!” Starting from the beginning, through the Festiglace years and to today, Doug’s photos and wild stories had everyone laughing through the whole show.  Thanks to Tom Yandon’s donation, a fresh keg sat at the front door of the Keene Arts Center.  He wanted to thank everyone for “littering”.

Monday morning we woke up to big snowflakes and dropping temperatures.  Yes!  With no snow cover on the ground at the beginning of the weekend, it was great to see it start piling up once again.  Winter was back.

To be noted, Don Mellor and Drew Haas are working on a second addition to Blue Lines and any information or photos should be sent to Don, emailed to Drew  or dropped off at the Mountaineer. They are looking to have it ready for next winter.

NEice would like to thank Ed Palen and all the staff at Rock and River Lodge for their unrivaled hospitality and of course, Vinny and all our friends at the best climbing shop on east of the Mississippi, The Mountaineer.

Check out some more great photos of the festivities here: