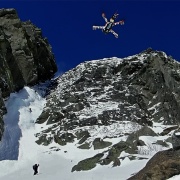 It was Easter weekend and what better way to spend it than with our friends at Harvard Cabin!  Packed in a sizable sled, the latest and greatest flying machine and it’s components were headed up the trail Friday night, ready (or not!) for the job ahead.  The weather and snow conditions were superb for climbing and skiing in the ravines, but NEice pilot, Doug Millen, had his eyes on another type of weather forecast.

After a few weeks of rebuilding the new Woo Kong, version 3.0, we were ready to give it the ultimate test. With its lighter, smaller frame and only 4 props, it earned it’s nickname Pocket Kong.  Saturday morning was a little breezy as we hiked up the trail into Huntington Ravine.  We could have estimated the wind speeds, come up with theories about thermals, debate morning versus afternoon wind directions, time in between gusts, where to fly and when.. or.. we could just Send It UP!  And we did just that.

A few of our aerial photos, courtesy of WooKong 2.5 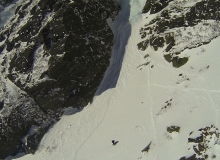 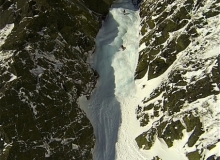 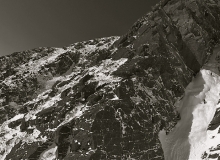 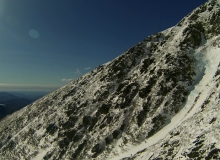 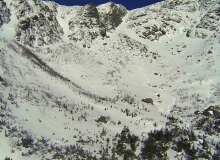 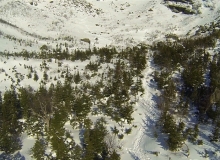 Taking frame grabs makes flying look so beautiful and smooth.  For those of you in the ravine that day, admittedly, it may not have looked so in control.  The winds were high and Pocket went for the ride of its life!   Even though we did get a good few seconds of stable footage (a few seconds is considered a successful flight).. I thought you all might enjoy the best of the worst footage from this weekend.

Here it is, the Out-Take Reel!

The Out-Takes Reel from NEice.com on Vimeo.