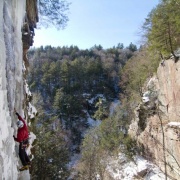 I’m standing below a steep curtain of ice. The route looked ok from the car, though not great, and truth be told, I know I don’t have my “A-Game” this morning.  My arms, core, and back are shot from Saturday’s thrashing session as I scratched, hooked, clawed, flailed, and fell my way up Erik’s savagely hard mixed line.  Climbing on Willard all day Sunday was fun, but it didn’t exactly leave me well-rested for this quick New Year’s Eve morning climb before running out of town.

I’ve climbed this before though, and I know that I’ve got enough in the tank to work it out.  I know how to kick, swing, place screws, find rests, and (if all else fails) bail and run away. I know that despite everything dragging me down, I can safely find my way up.

A lot needs to fall into line for me to bring my “A-Game” to the table.  It requires the right partner, the right training, enough rest, a clear head and myriad other variables to be just right.  Sometimes I think I have it, only for a mis-step, blown tool, or shift in the alignment of the cosmos to convince me otherwise.  Perhaps I just need to work on my resilience if I want to bring my A-game more often, but I think will-power will only get you so far.

I feel lucky in that partners are a piece of the puzzle I really don’t have to worry much about. I have supreme confidence in the people I climb with. Some I know can grab the rack and just fire up whatever it is I’m too chickenshit to lead at that moment.  Others don’t give me that luxury, but they are calm, positive, and know when I need that extra push to surmount the obstacles within my own mind.

The last two seasons, I feel like I at least had the training part down. I came into the winters of 2010/11 and 2011/12 strong and confident. Countless hours in the gym, hanging on tools, figure-4ing and otherwise pushing my body in ways that made my friends and colleagues question my sanity, but I was CONFIDENT. Maybe not in my skills, but in my strength. I knew that I could hold on forever and place that screw despite the screaming in my forearms.  While there were undoubtedly climbs that were physically beyond my fitness level, I was plenty strong enough for the climbs I wanted to do. I didn’t climb my way into shape, I jumped right onto routes that were test-pieces for me a day or two into the season, and I SENT. 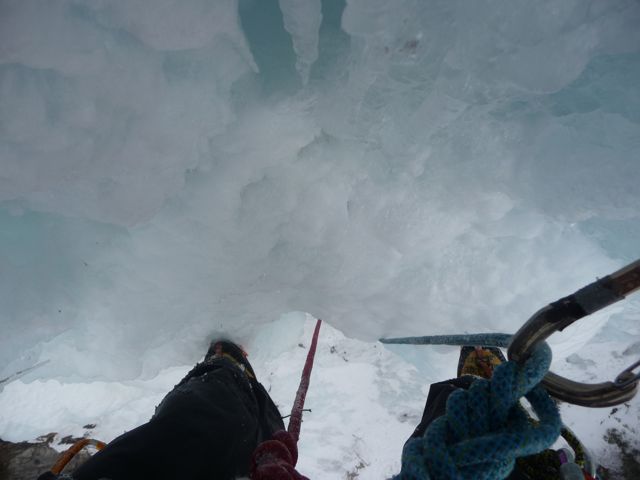 Stopping to take a photo of my feet while leading the second pitch of Mindbender… probably as good as it got last year.

For me, having a clear mind is perhaps the one thing that has been the most difficult part of bringing my “A-Game”.  Part of it has to do with rest – I’ve never been good at shutting down my mind to get some sleep – but a lot of it has been just the stressors of life that we do our best to forget for those few hours out on the ice, but can never really forget.  The last two seasons, despite great climbing partners and knowing I was physically up to the task, climbing well was never a given.  My spending time with great people and being fit made me feel good, but it wasn’t going to cure Emily’s cancer.

I’m now two moves up the steep curtain.  It would be easy enough to bail from here… a couple of moves down to a ledge and I can just go home. My partner won’t care. He is equally as beat physically, and he gets it.  He was there visiting me while I spent the 6 weeks leading up to the season sitting with Emily as she lost her battle.  He was at the memorial service…

A small watermelon has just exploded out and clocked me in the chin… I’m bleeding a bit  (and my jaw still hurts three days later). It’s settled. There’s no way I’m turning around now, and I’m going to the top.

My forearms and calves are not happy with my decision, but it was the right one.  We all hope to bring our “A-Game” each time we go out, but the reality is that it probably won’t happen.  In this case, I can take some comfort in knowing that despite not being anywhere close to having my “A-game” so far this season, I at least have a pretty satisfying “C/C+ Game”. 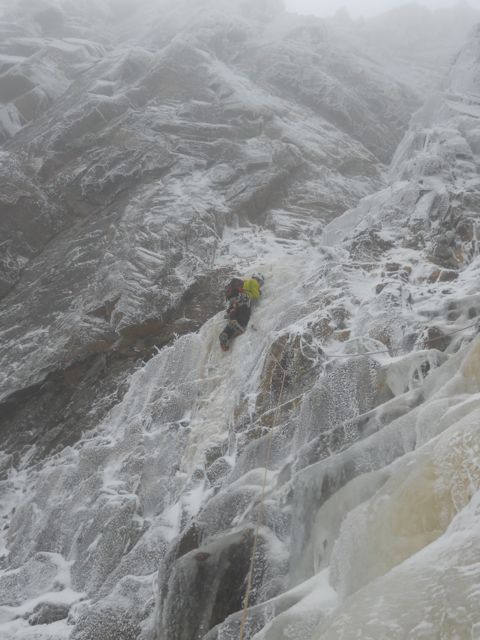 UP! Icefest Events!
Scroll to top