When most climbers think of the climbing in Franconia Notch, one route immediately comes to the forefront of thought and discussion. This route has earned the reputation, colorful descriptions and epics that it has induced. In 1971 the trumpets were blown signaling the call to arms on this shadow shrouded line before it’s first ascent in December of the same year. Declared as one of the last unclimbed plumbs on the East Coast by the ice master himself, Yvon Chouinard, the reputation had started.  “A black, filthy, horrendous icicle, 600′ high, unclimbed.” To this day, it is still touted as the “measuring stick” of the aspiring climber.  The route is the Black Dike and everyone knows of it. The Dike is surely one of the most aesthetic routes in the Northeast. This climb has developed another purpose for many, that of herald to the on coming ice climbing season. Cannon Cliff is in easy view and dominates the notch. When the ice adorns the cliff’s streaked gray walls high above the notch, it is something truly inspiring and something to behold. 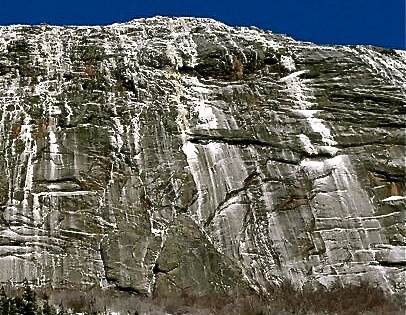 The Ghost & One Drop of Water

Even the most seasoned climber will feel the awe when rounding a corner on the highway. Then right before your eyes appears the line of Omega in full. 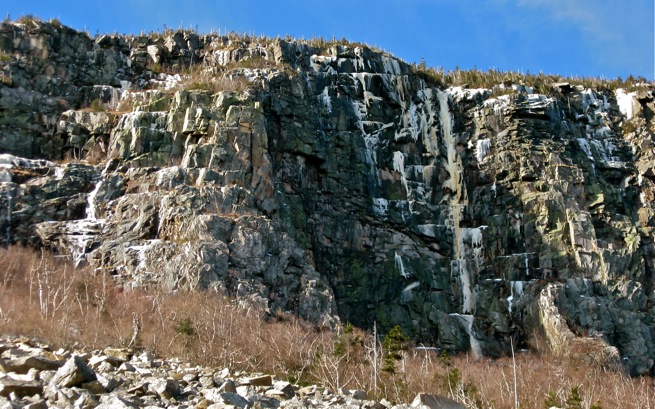 A ribbon colored in a hue of burnt yellow to orange, running from top to bottom. This route will surly get anyone excited regardless if you are aiming to climb it or not.  However, besides Cannon Cliff and the well known Flume Gorge, there are other areas that tend to be over looked. Meanwhile, across the notch up high, lay alpine gems, and they come in early. 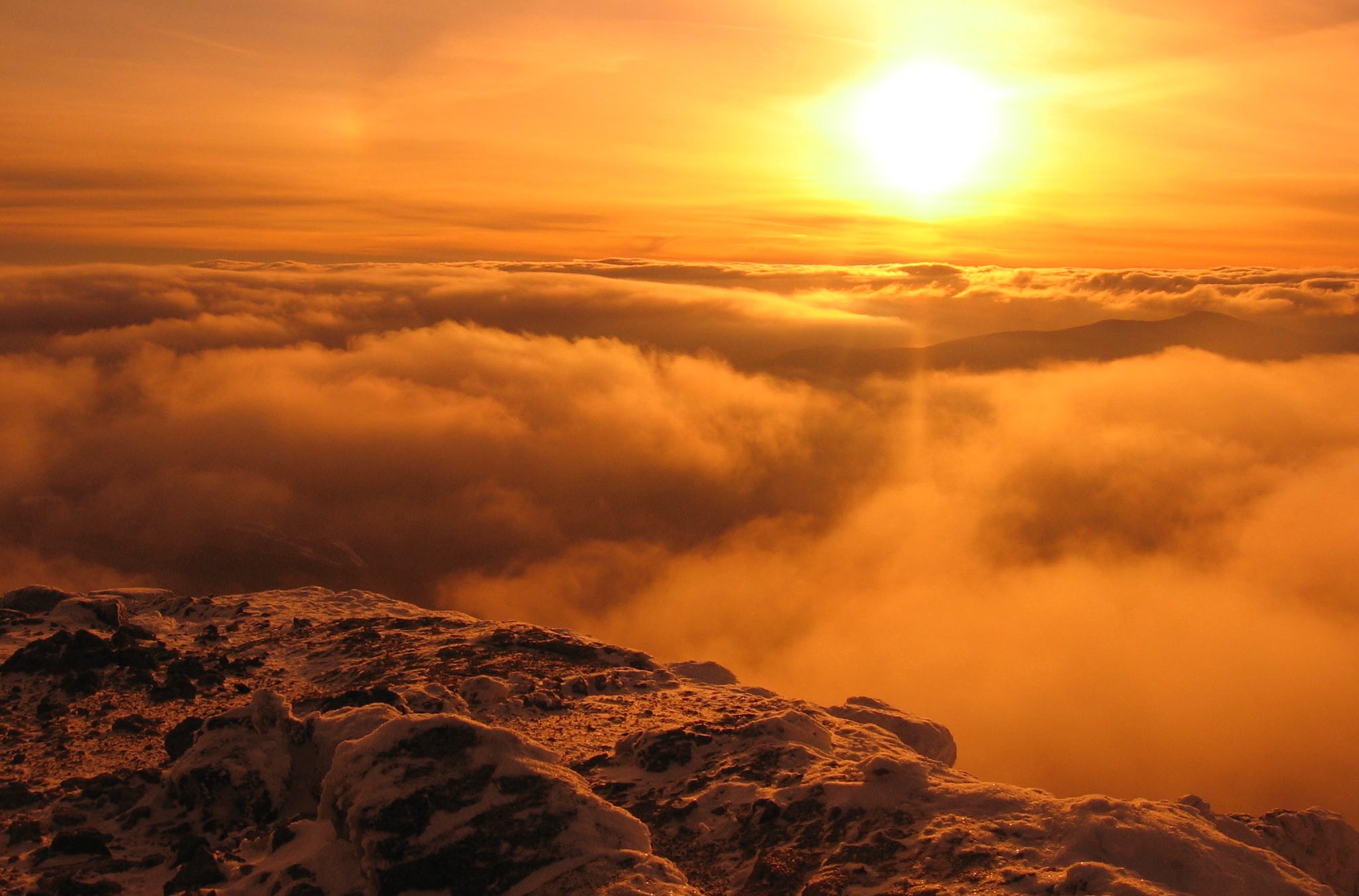 Guarding  the East Side of the notch lay a venerable mountain ridge over 400 million years old. The arctic alpine zone along the Franconia Ridge, though not as vast as the Presidential Range, has a unique feeling when one climbing there. A lost emotion is awakened by this place, brimmed with wonderful and wild remoteness. Getting to the routes can be scrappy affairs, visible slides with their huge iced slabs and choked corners, though easy by pure grade, are backcountry climbs and demand respect and commitment.  The wondering that has been instilled in us as we have looked from the comfort of the car far below, can only be realized by way of plunging over deeply forested ridges, eskers and up trail-less drainages. 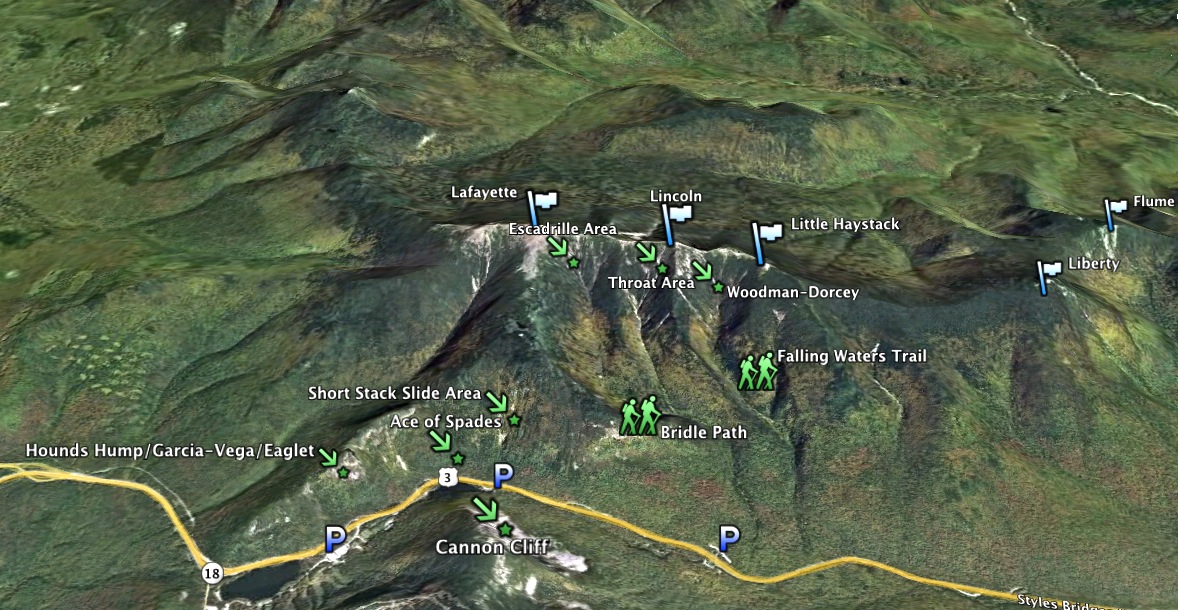 In Franconia Notch, the game is on right from the moment one leaves the car. It does not matter if your destination is to the East or West side. The talus of Cannon, though short can be epic. And the deep climbs on Lincoln & Lafayette are committing. Packed trails are followed for only a short distance. 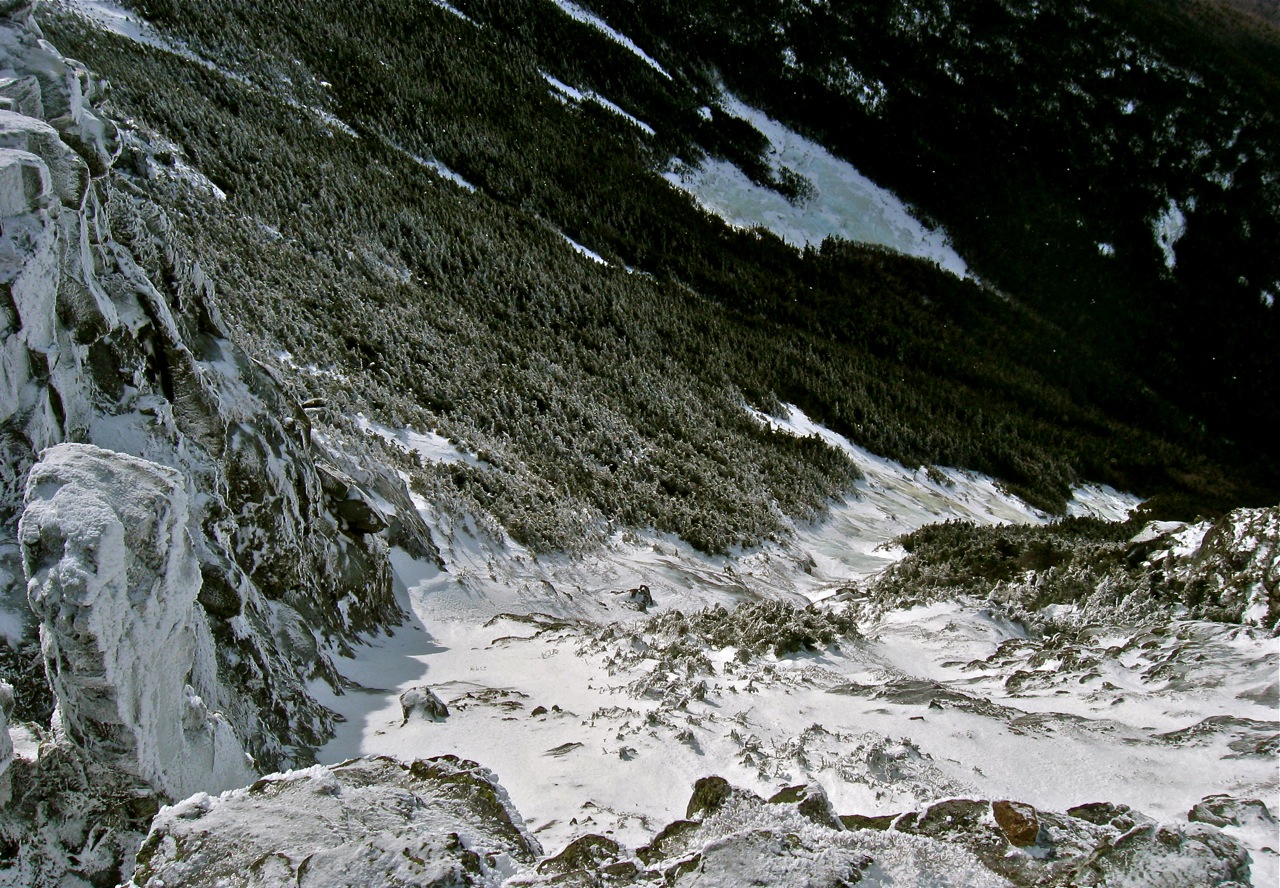 Deep snow on the approach, even for the well prepared can be an exhausting affair. But this is part of the flavor found on these peaks. Getting too the climb, then topping out on the summit is a physical crux and one not to be taken lightly. One other fact that is quite unique to the northeast, these climbs end at the summit of the peaks they are on. 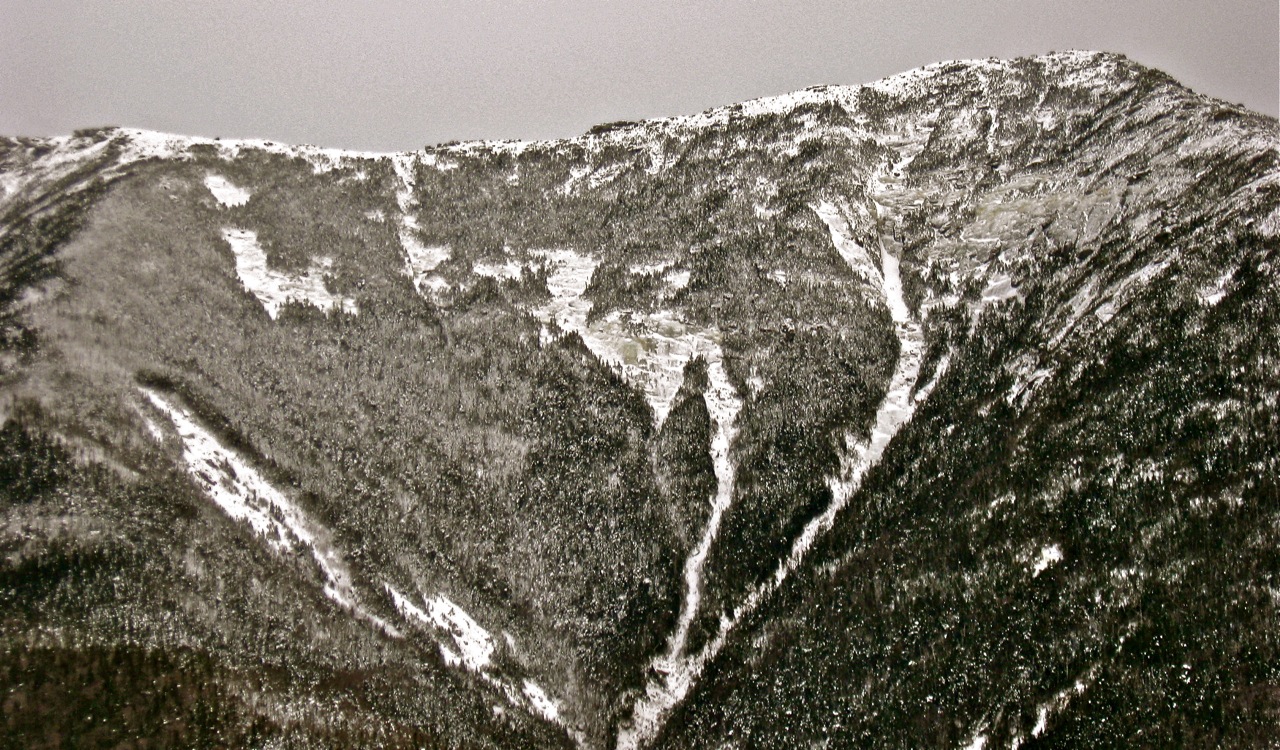 Taking the early season plunge into both Lafayette and Lincoln will be a rewarding alpine experience. In  November of this year while Huntington was getting hit by sunny, cloudless days, the Mullet Route on Lincoln with it’s NW aspect was alpine perfection. 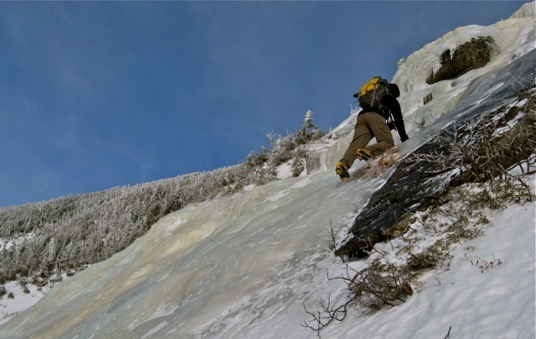 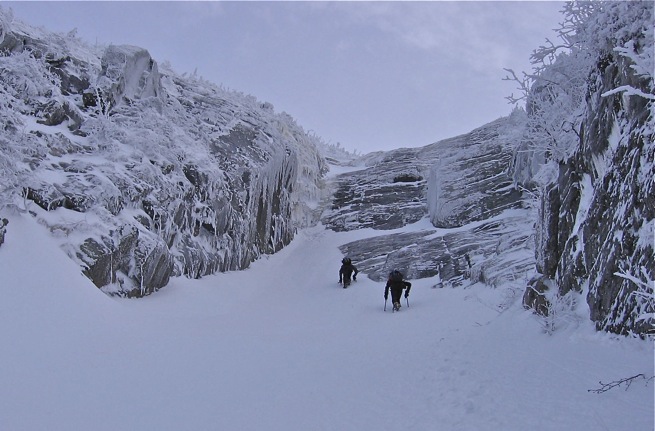 Every year I am lucky enough to experience these mountains with their thought provoking climbing challenges. Clear feelings of awe and purpose are rediscover time after time. Moving through the higher ground of scrub fir and spruce, the journey to and attaining the clean, pristine summits, takes some of the weight of the world away.  The approach to the climbing on Mt. Lafayette is longer and much more of an endeavor than those on Mt. Lincoln. If the weather is not so savory, this location is only for those totally ready to throw down the gauntlet and take the plunge. Suffice is it to say, both mountains require the spirit of adventure.

Across the road from Profile Lake, on the broad flank of Lafayette two excellent climbing areas reside. The steep Ace of Spades with its satellite routes nearby offer difficult climbing after a steep hillside is ascended. 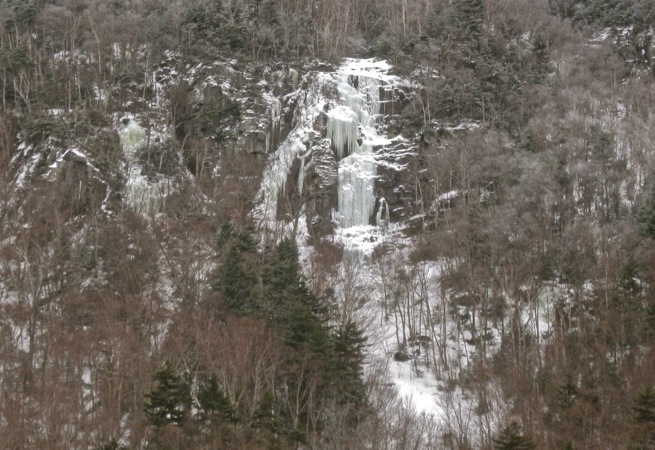 A short distance to the South is the old landslide scar of the Big Slide, home of many interesting options. The first landslide to start the creation of this was about 1915. Several others followed with the last being in 1959.  In the center of this slide is Short Stack. This route, followed to the slides top is long and much better than it may appear from the road. Within the slide there are hidden creases that carve into the mountain and run upward over very long distances. Before they fill with snow, these slices, headwalls and open slabs provide fun climbing.  The seldom seen views that end with the climbing, high on Lafayette, will thrill the mind and stir the soul. 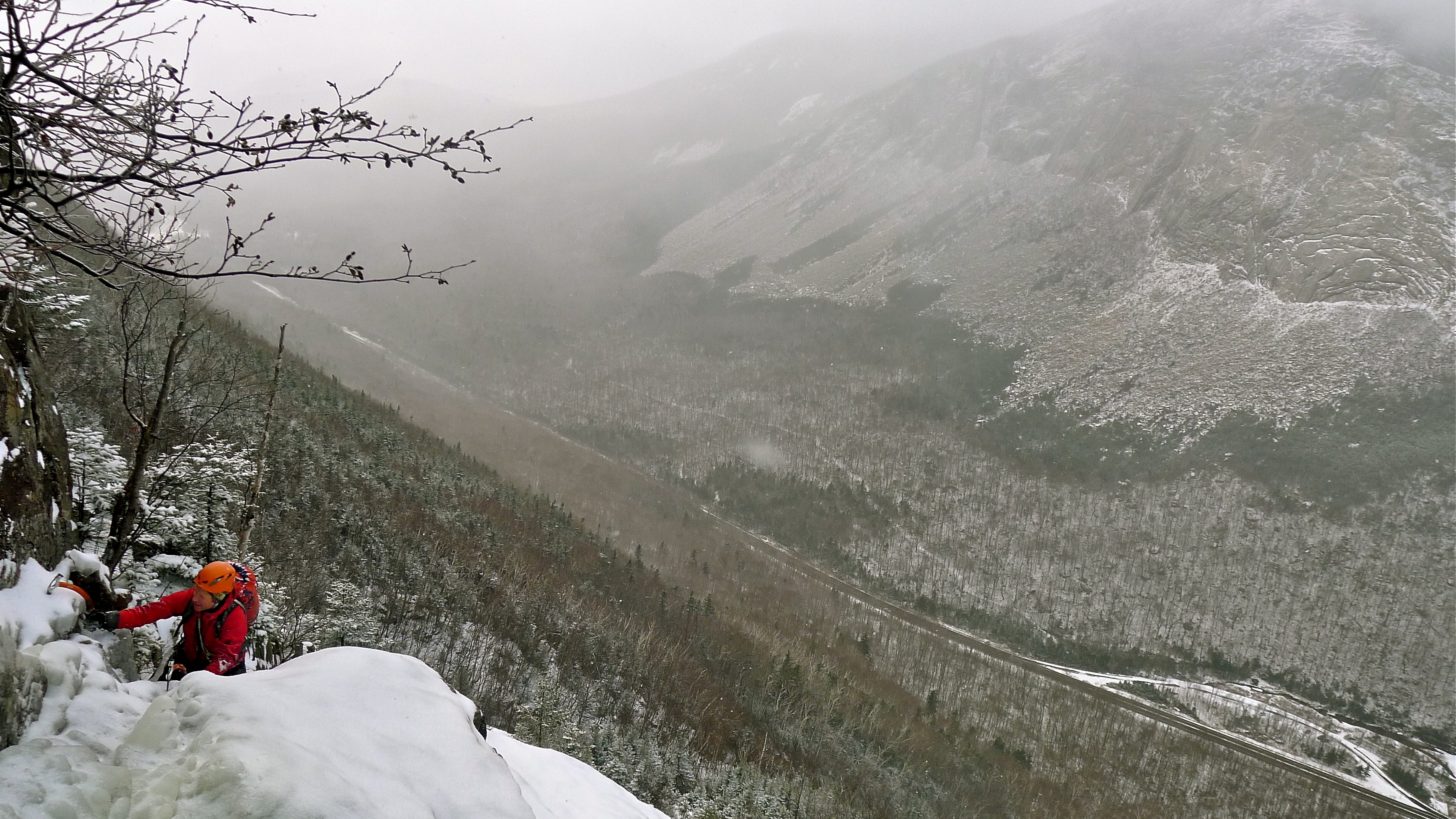 High in the Short Stack Area

The Flume and Echo Crag are justifiably popular. They are close to the road and have almost every type of climbing one can desire. The Flume Gorge, deep, narrow and filled to the brim with ice. It’s unique setting coupled with accessible mellow to extreme lines help create a place that has no peers. At the utmost north end of the notch is Echo Crag. Here one will find a fantastic spot for leading, for both new and experienced climbers. The long cliff system has chimneys, corners faces and mixed lines. And also protection options ranging from screws, bolts and passive gear.

The Echo Crag is the northern start of the complex Hounds Hump Ridge. This area has many routes along its western side. Further south up the Hump, near the Eaglet is the home of the Garcia-Vega. A rare to form route, but when climbable, it’s a beauty. The 180′ of climbing is well worth the hike up and right up there with other climbs of the same nature. Also there is a wide chimney to the right on the same wall that is quite hard. I did what I thought had to have been a first ascent of this gash in the early ’90’s. Only to find out later, two very rad guys did it two decades before. With the gear of that time, it must have been savage. Hats off gents for the route, Fire & Ice.

There are still many more climbs and areas worth exploring. My point was not to name them all,  just a few and bring to light the mystery and beauty of the Notch.

I recommend  Secrets of the Notch by Mr. Franconia himself, John Sykes. I’m unsure if this book can still be found, but have heard a new book is coming. Maybe it is out or perhaps I just dreamt it.

Cheers and enjoy the Notch.