First Dates.  We’ve all had them – those initial encounters with someone.  Usually, it’s awkward, you’re trying too hard to look cool, you don’t know if offering to pay for the meal is chivalry or chauvinism, and you have no idea where things are going.  Other times it just clicks and works out perfectly.

Even for those of us not really on the dating bandwagon right now, there are plenty of first dates to be had: new partners, first day out of the season, or just a new crag.  Wednesday was all three for me.

I haven’t had a chance to climb with Erik Eisele, but we’ve been in touch a bunch lately.  He reached out to me when I was asking for beta on the Cathedral Cave, and I’ve found his writing on his blog, Shades of Granite, to be particularly articulate and compelling.  We hatched a plan to meet on Wednesday for a session in the Cave.  We’d meet at 7am since Erik has to work on weekdays, which meant a 5:15 wakeup for me.

7:20 am:  The soft light drapes over me and I’m fully aware of my surroundings. FUCK!  I’m in my bedroom still! Instead of getting my ass kicked by some severely overhanging drytooling, I’m comfortably tucked in a cocoon of warm blankets.  I’m instantly wide awake and give Erik a call to let him know what’s up.  Fortunately, our mutual friend, Ryan, was also on board for the morning session and is capable of correctly setting his alarm.  With Ryan on board, my botching the first date at least didn’t ruin Erik’s day – he sent his long term project, The Mercy.

Meeting a new partner and exploring a new crag was off the table, but there was still the chance to salvage one of the three facets of a first date – the first day out for the season.  With this in mind, I drove over to Crawford Notch in hope of climbing Shoestring Gully. 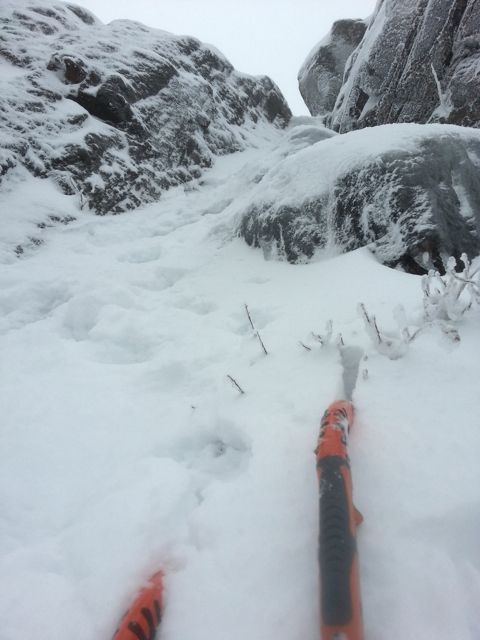 Cars were already parked below Shoestring and tracks led down to the river, so I figured there was probably a good way across.  There was, but that didn’t stop me from putting my boot into the river and feeling the water run down into my left sock.  So much for making a good first impression.

To climb Shoestring, regardless of whether it’s your first date or another day in a long relationship, follow these directions: “you park, you walk straight down to the river, you go across the river, then you go straight across the trail, head straight up the gully… then you walk straight up.”  This is good advice.  I, however, having already botched the first impression, proceeded to follow a set of tracks heading up and left despite knowing that really I just needed to head straight up.  Thus my path, instead of looking like a straight arrow, resembled the footprints on one of those annoying Family Circus cartoons.  So much for looking cool.

After an hour(yes an hour, on a climb I did car to car in 90 minutes last year) of wandering, meandering, at times wallowing, and wondering if I was about to make a bushwhack ascent of the mighty Mt. Webster on one of the most meaningless, laughable “taking the tools for a walk” moments in New England mountaineering history, my predecessor in bone-headed self-imposed suffering led me to the base of the climb itself.  Although late, I’d have that first date after all.

Sometimes, even on a first date, you just KNOW