On the Drool of the Beast & Sheer Elegance 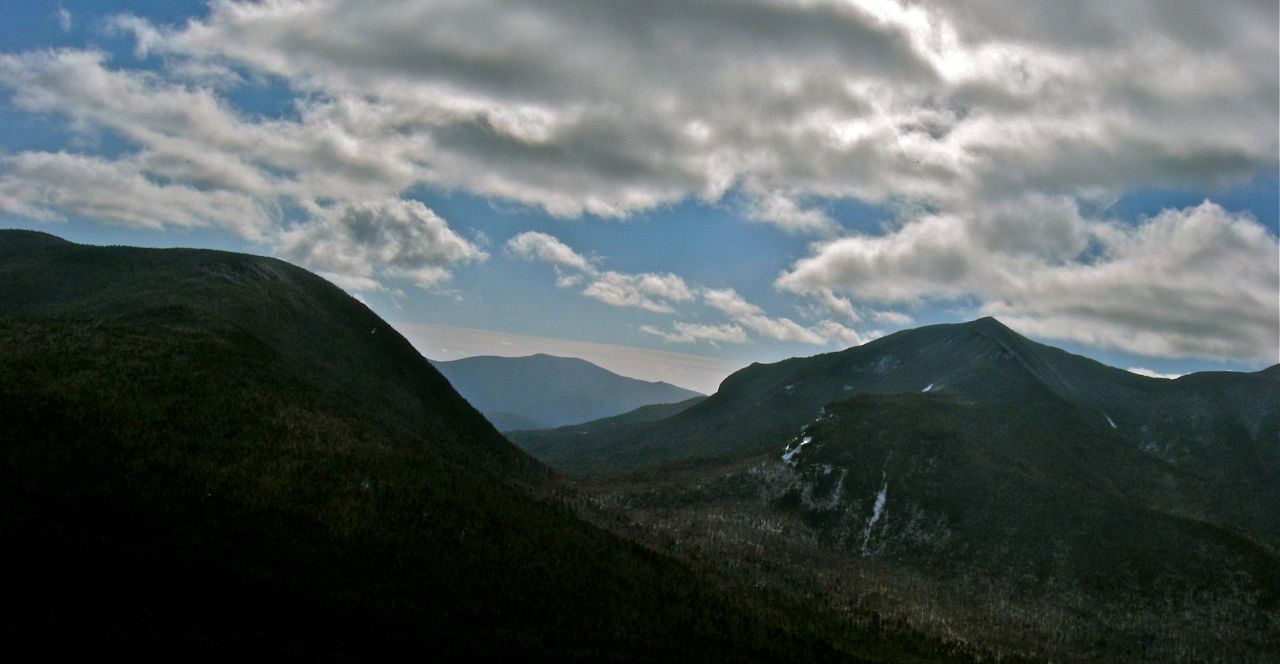 Mt. Kancamagus (L) & Osceola’s East Peak flank the Mad River Notch, the home of On The Drool of the Beast.

It was Icefest week end here in New Hampshire. Many people shy away from areas during these times, thinking every piece of frozen water will be wedged with humans…. If one knows where and when to climb, this is not the case.

The Kancamagus is an east-west highway. It slithers like a snake through the White Mountains and gives access to many popular climbs.  The most sought after is Way in the Wilderness on The Painted Walls. And right next door is The Rainbow Slabs. On the other side of the road, in a slice on the side of Mt. Chocorua flows the heavily hit Champney Falls. These are the places that will surly be busy. But there are other climbs that will not be

On the Drool of the Beast  II 5

For a backcountry area, the ice in Mad River Notch and the amazing line of The Drool are quite easy to get too. One just has to commit to an easy 2.3 mile walk and a wee ‘lil bushwhack. I have done the route three times with the first being in’93 and had sung of it’s aesthetic beauty to many friends over the years. The Drool is one of those routes that lives on the peripheral of thought for most. Lurking with its back to the road.  Not visible without hiking in, with the more noticeable ice almost always taking precedence over it. But I had one friend that wanted it bad and was willing to take the chance on it being climbable even on a short day. If it was not in,  little time would be left for something else.

I met Emilie Drinkwater in the Greeley Pond parking lot and though the trail was packed, we decide to ski in. We had two different reasons for this. My reasons, not being a very good skier, the approach and descent would be just as exciting as the climbing. Emilie wanted too because she claims to hate walking and getting out would be quite fast. I also think she knew with my skiing skills, I would provide some good entertainment. And I’m pretty sure I came through on that.

We stop at the spot where one can get an obstructed view of the climb. Emilie had been wanting to do this route for years and had the same reaction I had with my first sight of its line. “WOW!” then,  “That is only one pitch?”  The route looked pretty good, with the exception of one section down low that we could not see. Once up close it all was there, however it was thin.

The beautiful ribbon of The Drool and a lean version of Aye Karumba! (R)  photo-Emilie Drinkwater

Emilie was her usual, humble self and while racking up, made some silly comment about if she did not make it I could finish it.  I said sure and reminded her of the schooling she doled out with the Rollies at Sozt’s during Mountain Fest.  After the first few pieces of rock gear were placed at the start, the rest went like clock work for her, what a surprise. 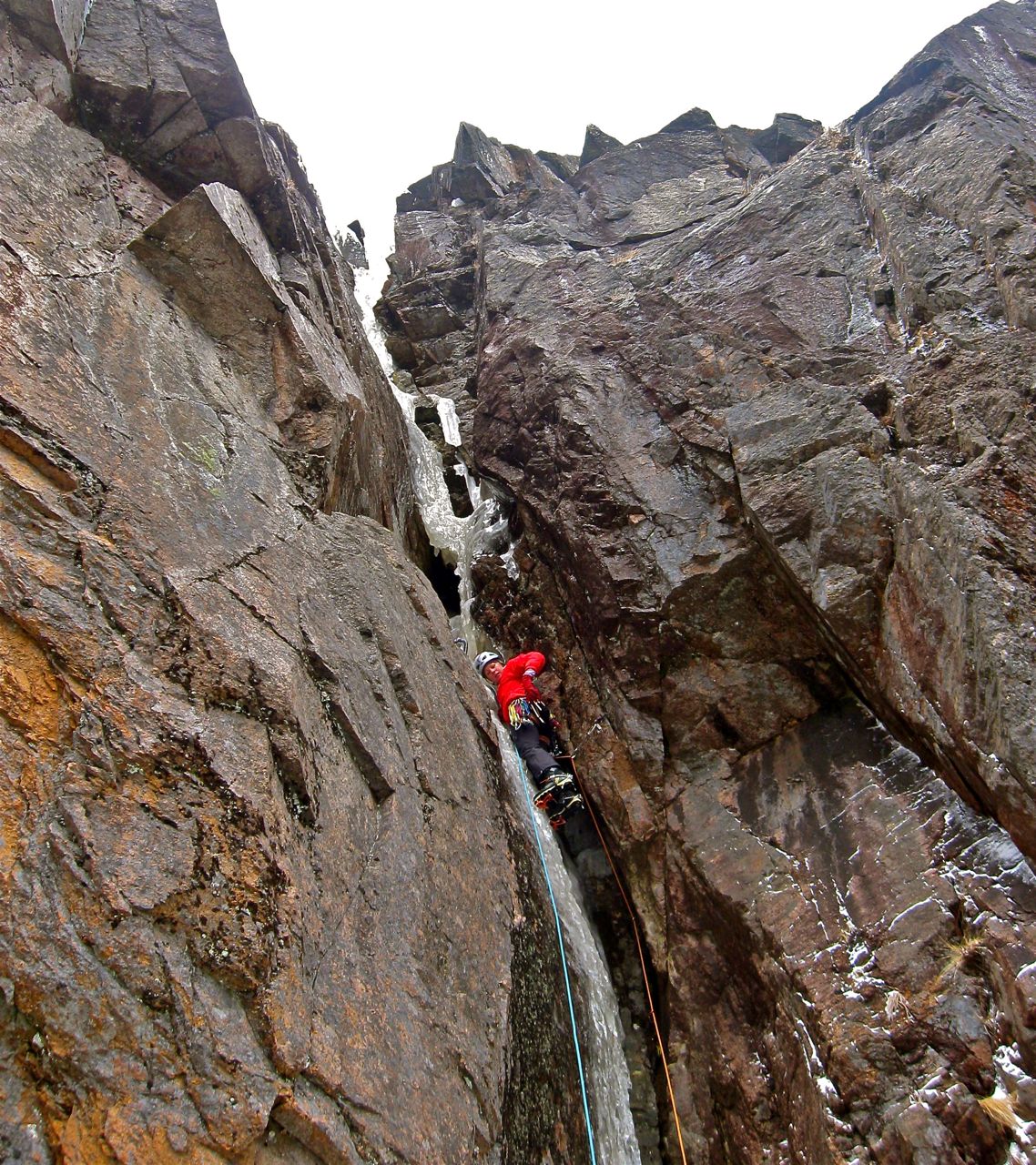 The Drool has everything a climber could wish for. Its location and the impeccable nature of the climb suffer few rivals. Good rock & ice gear, stemming, chimney moves, corkscrew weirdness and pure straight on ice for the finish.  All in a remote mountain setting with spectacular views across the Greeley Ponds to the layers of mountains stretching out to the southeast.

In no time at all Emilie had topped out and I was climbing.  The typical thought “I’m glad I’m seconding”  entered my mind right from the start and stayed with me through the steeper than it looked from below finish.  Once back on the skis, the  trip out was fast, with minimum damage to my coccyx.  Along the Kancamagus we stopped near the pass for a look back west  to Mt. Huntington. Ted Hammond had mentioned Sheer Elegance, the stand out route on it’s huge southeast face was looking good. And it did indeed.

Anyone driving on the highway has seen it. As one drops over Kancamagus Pass towards Lincoln, Mt. Huntington tries to block your passage.  Its bulky southwestern shoulder with its massive wall will fill your vision.  In the winter an amber like sheet of ice trailing off to a slender ribbon, cascades down the chocolate coloured slab. Always tempting, always dismissed…. except by a few. 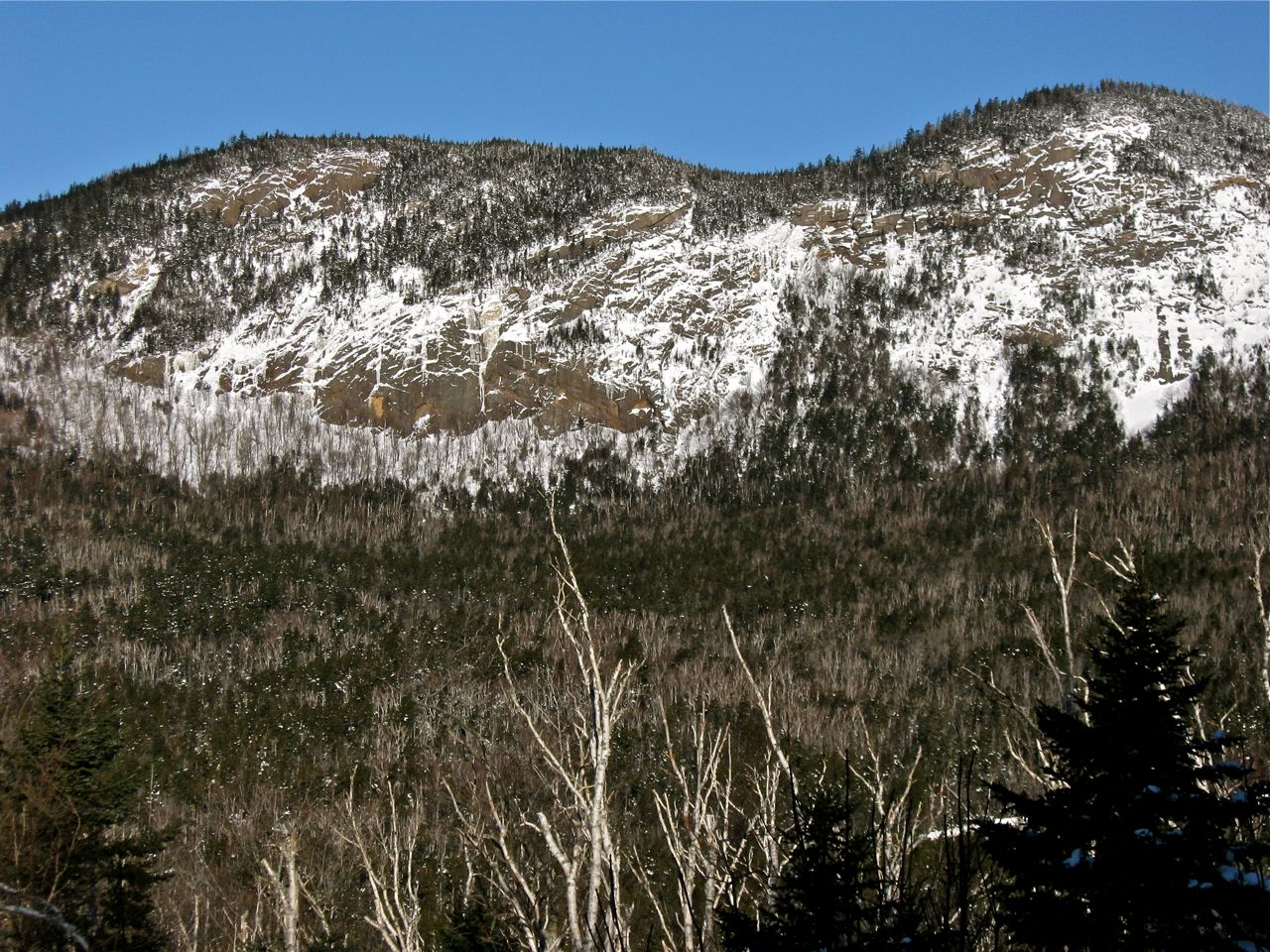 Mt. Huntington and the line of Sheer Elegance 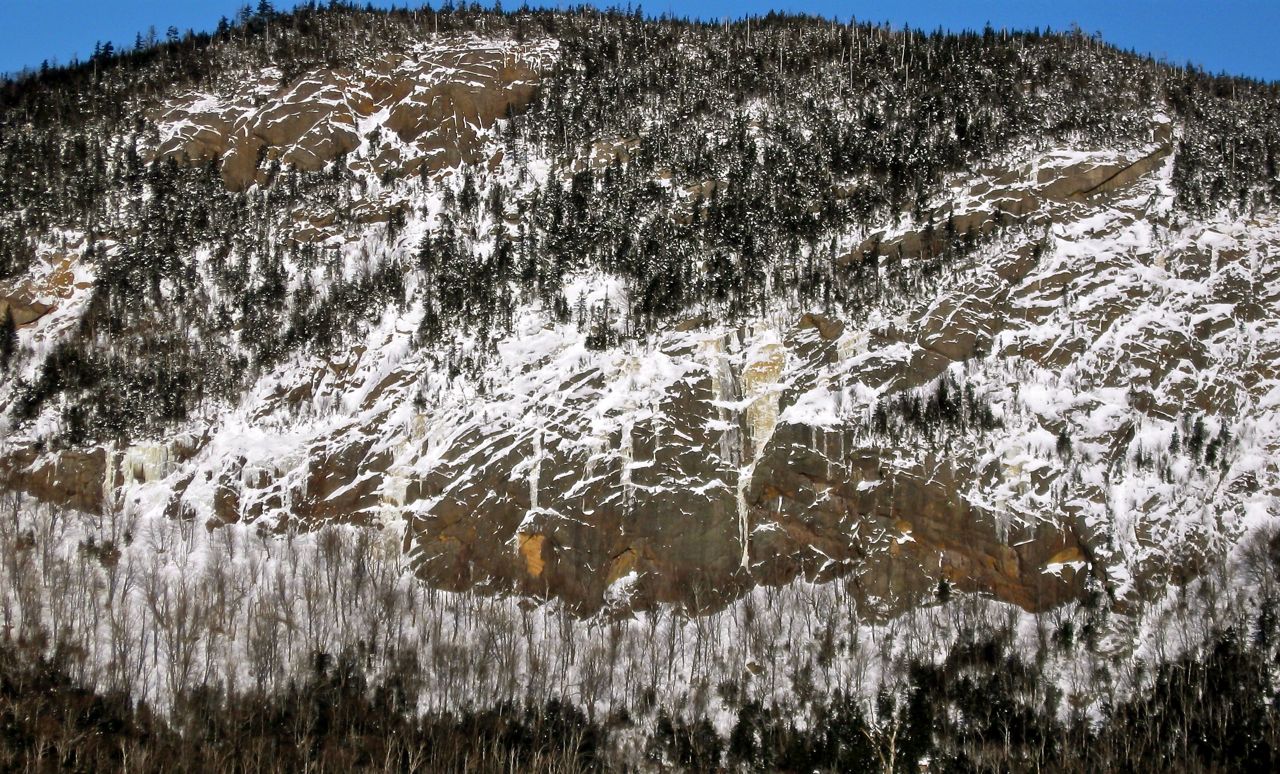 Sheer Elegance (center) and other beautiful climbs to the left.

A few years ago a good trail was established by Chuck Woodman and others while putting up some of the rock routes on this complex cliff system.  This trail, if one knows where to find the start offers an very cool, easy way to the cliff.  Ted Hammond and Mark Casale packed it out going into the routes on the left end of the cliff. And while doing so got a first hand look at the start of SE.  The report was a big grin.

A view of the route from the approch

The day dawned clear and cold but the sun could compromise the ice if one gets too late a start. A semi late night after the dry tooling comp did not put much of a damper on our departure time. Freddie Bieber , Ted, Mark and I were at the cliff  with Fred racked and rolling by 9. 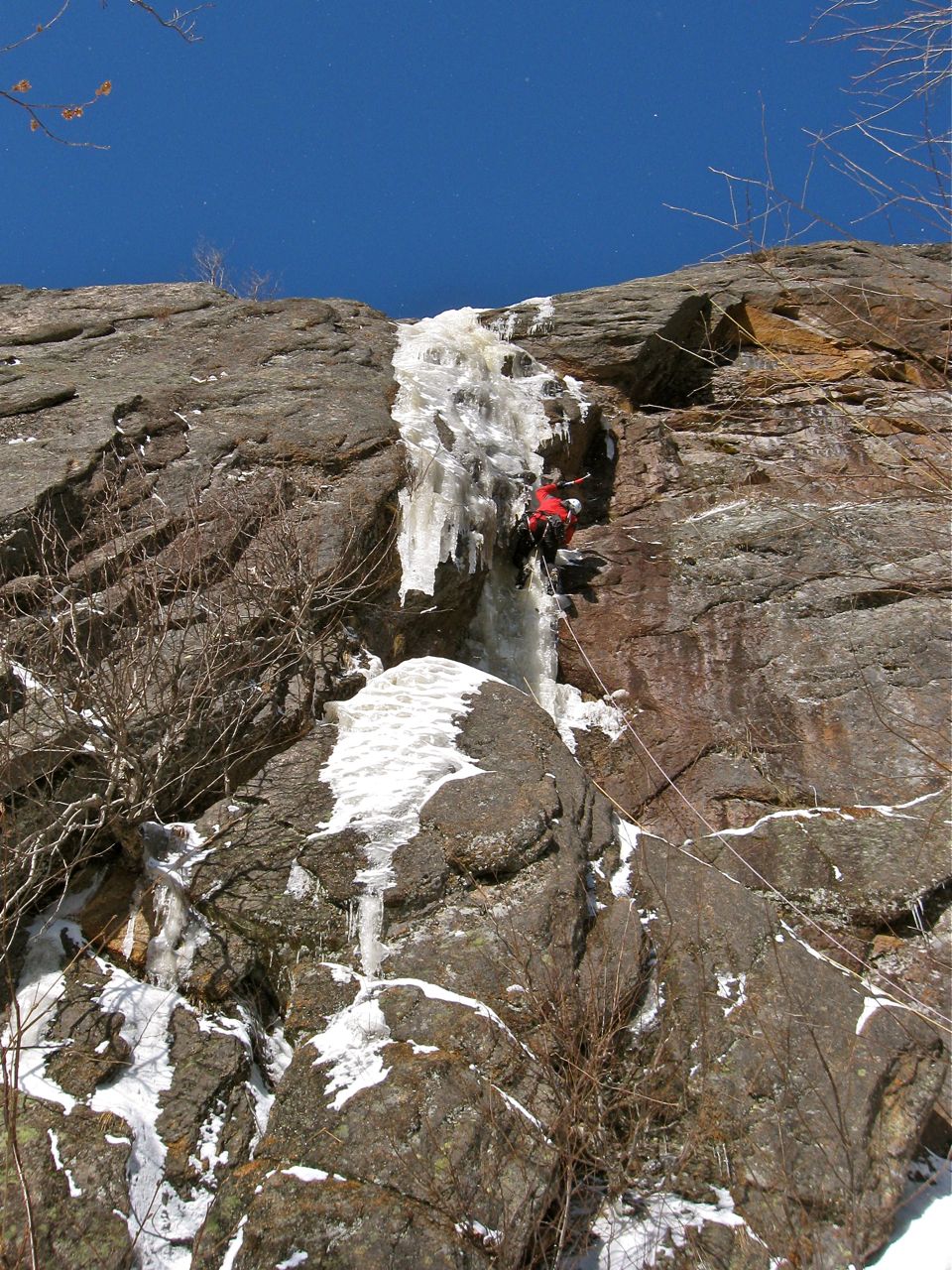 When Fred got to the start of the crux the scale of the steep section really showed.  And though he had not been on any steep ice this year, Freddie cranked out an excellent lead.  After the crux the ice kicks back for a bit to a snow & ice ramp that leads right. After that a huge sheet of soft, amber leads to the trees.

The day was absolutely  brilliant. Good friends sharing an amazing route none of us had done, totally alone.  And that is a rare gift. The rating is a bit old school and I’m not looking to change it.  However I found the crux to be similar to that of Repentence when it is in good.  Narrow, barndoor-ish and in the grill a little longer, but then easier.  We did the route in one long pitch with double 70’s.

Sheer Elegance and On the Drool of the Beast are beautiful gems.  These lines are total classic’s and I feel very lucky to have done them this year. Both routes require cold and cloudy weather to form. Keep the eyes open, Sheer is right in plain view. If it looks good from the road go for it! As for the Drool…. take a chance and a walk, if it’s in your be smiln’, I guarantee it.

Good job to Emilie & Freddie for their nice leads and for dragging my butt up two great routes.