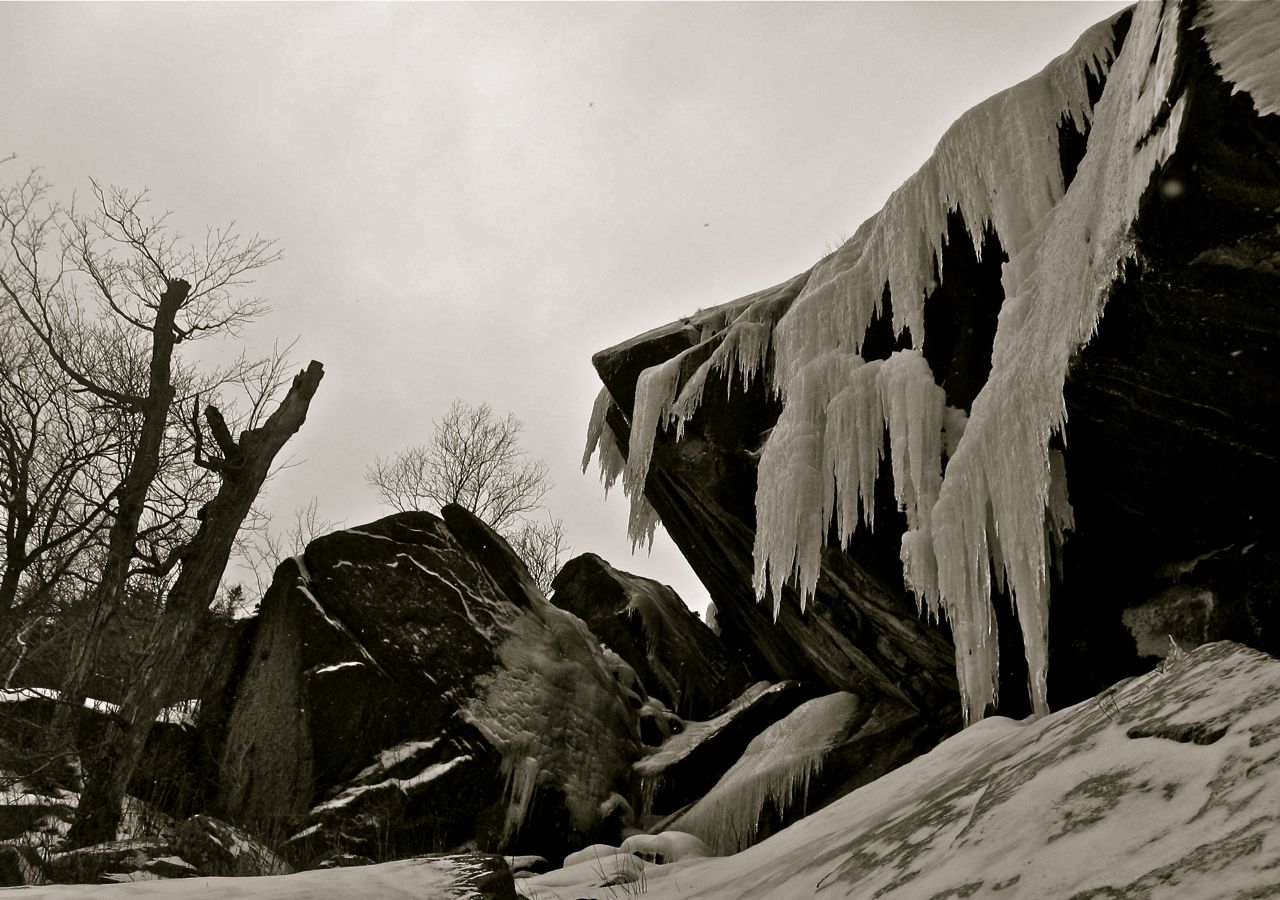 The Horses are on the Track

In late October the first ice was climbed. The ice season was starting.  As usual I was chomping at the bit and wanted more.  Then the temperature started to show signs of being bipoler.  The swings so far this season have been up and down like an out of control EKG reading.  And although there is a prediction of 6-10″ of snow as I write this, a very lean snow year is upon us.

Hitting the conditions while the weather was in a state of mania was the trick. Some of us failed and were caught in the quick swing back to manic. Many climbers have voiced disdain for the start of the season, those that have, are not totally wrong.  The usual steep suspects have been slow to show up and some of the big routes many not even form this season.   However, if one looked, there has been plenty of ice to climb and in some of the best conditions a climber could ever wish for. A lean snow year has it’s advantages too. All that one has to do is stop the neighing and giddy-up. 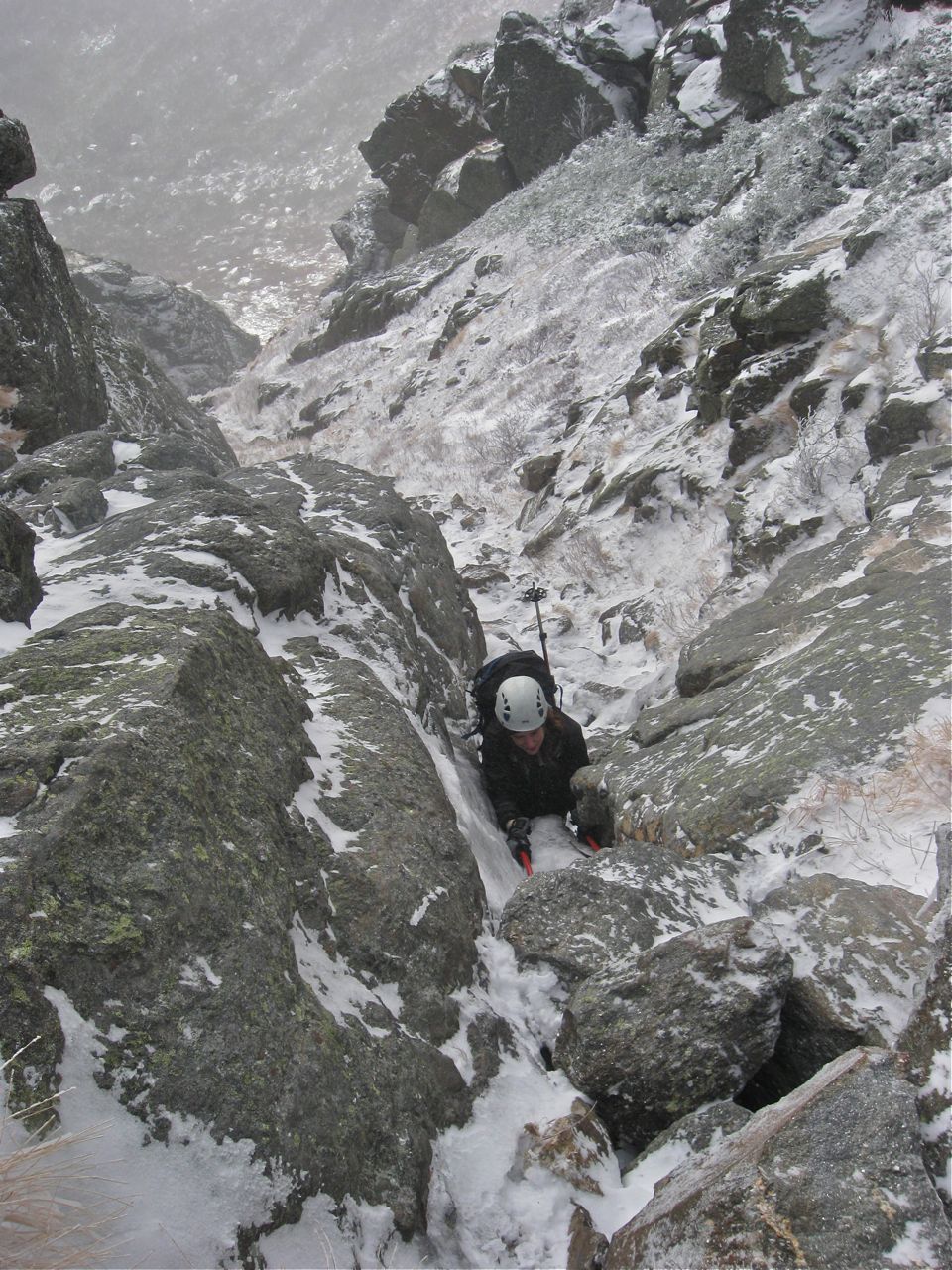 Of  Little Snow and Cold Air

I had this day planned for some time. It’s early January and with very little snow, a good shot of cold air, the time was right.  Even ice at the lower elevations was forming at last and getting climbed. Repentance, Remission and Dropline,  being some of the steeper lines, were sent. But for me I had something else in mind.  The conditions were ripe for a day of continuous movement over a variety of terrain before any snow falls and sucker punches my plan right in the throat.

Mt. Webster in Crawford Notch is like home for me. But the funny thing was, I had yet to visit as many of the beautiful, alpine rooms it contains in one session.  These rooms would be full of water ice flooring. The typical rugs of white were not installed as of yet. The descents would be more challenging however. Steep, gothic style tree fencing and icy to bare hard earth. But the beauty of hitting these gullies filled with ice, would be well worth the pain of the descents. 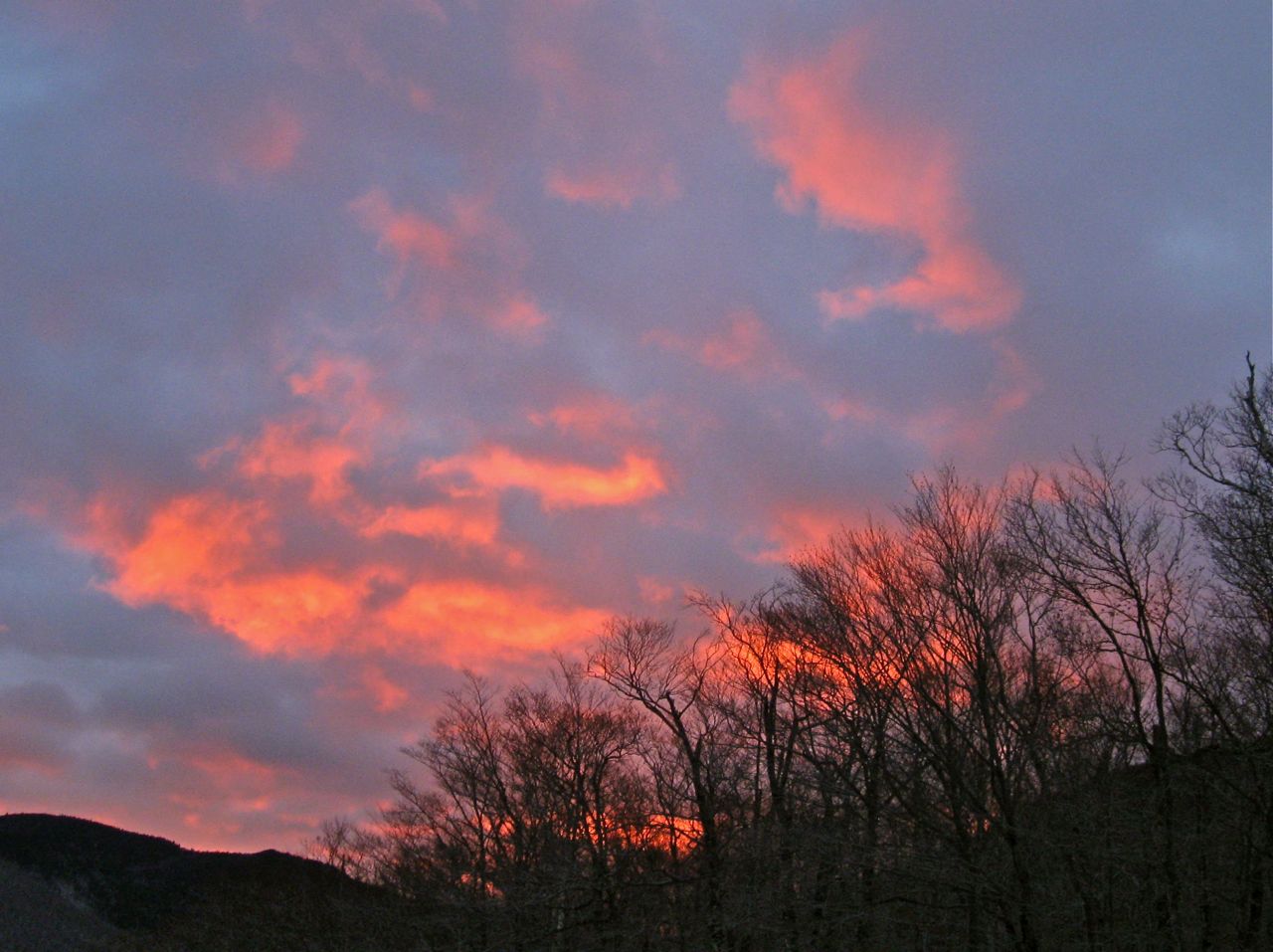 The lighting of the day.

Linking gullies on Mt. Webster has not been an easy thing for me to envision.  Which order to do them and how to get down after each ascent has raged like a battle in my mind, back and forth, always ending in stalemate.  Though I think of the climbs on this mountain as alpine routes, the mountain is at a low elevation and trees ring the routes like a crown of thorns.  You have but two choices to get down after each climb.  The winding Webster Cliff Trail or throw down the gauntlet and bushwhack down the steep, thickly wooded slope of this mountains western aspect.  I decided to take the pill that makes you small and chase the white rabbit down through the woods to my next climb. 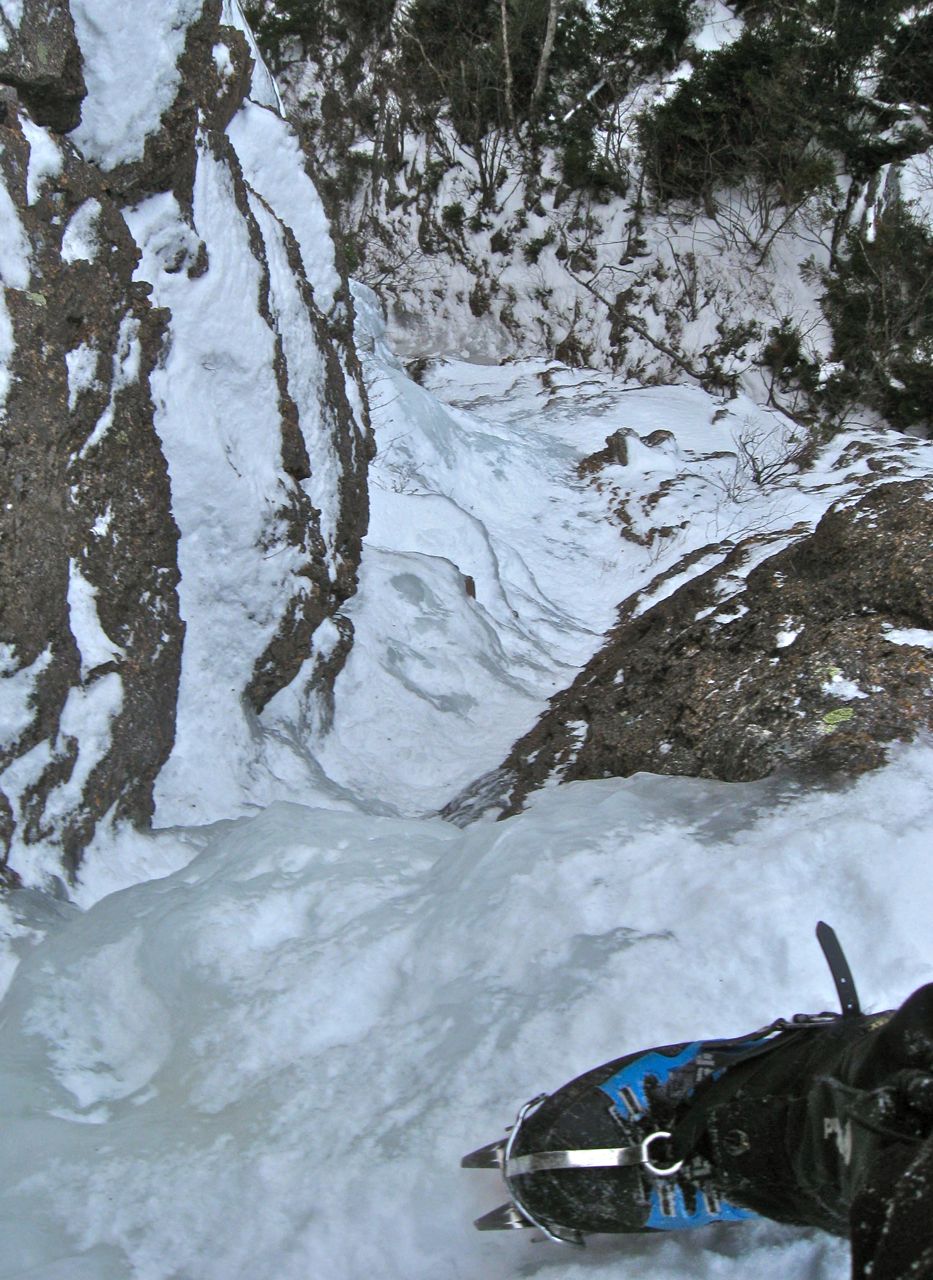 With a plan conjured up during my drive, I’m off for Shoestring Gully. Being the most popular route I need to do it before the tsunami of people arrive. The approach is easy and the ice could not have been better.  After topping out, I do the opposite of a normal Shoestring session. I plunge up hill into the woods then crank a hard left and angle down to the start of Horseshoe Gully.

The descent is through a variety of flora & ground conditions. Tightly growing trees and eight inches of snow lead to open rock with small cliffs. This in turn gives way to more deciduous trees and bare, hard ground. I work my way down and north to the next crease in the mountain.

Horseshoe is a line I had never been on.  The climbing was not it’s redeeming feature, its character and mood was.  To be in a place I had never tread was wonderful. The views out, towards the notch and Mt. Willey were different for me.  While in this gully the clouds had lowered and a light snow started to fall.  I look up to a mixture of snow and ice, rolling upwards to the deep woods hemming in this upper zone. It’s there I moved out and south to make my descent.  In what seemed a short amount time I was following my tracks down once more.  Another act of stumbling, falling, getting stabbed and slapped in the face was underway.  All the while yelping like a hurt coyote or growling like a bear as I pay my fee for traveling through this place.

I make for my car and move up to the Willey House parking and my next climb, Landslide Gully.  My plan being to ascend that climb then continue north along the Webster Cliff Trail to the mountains summit.  Once there I would drop down the Mountaineers Route and work my way south to  Central Couloir. But first, Landslide Gully. 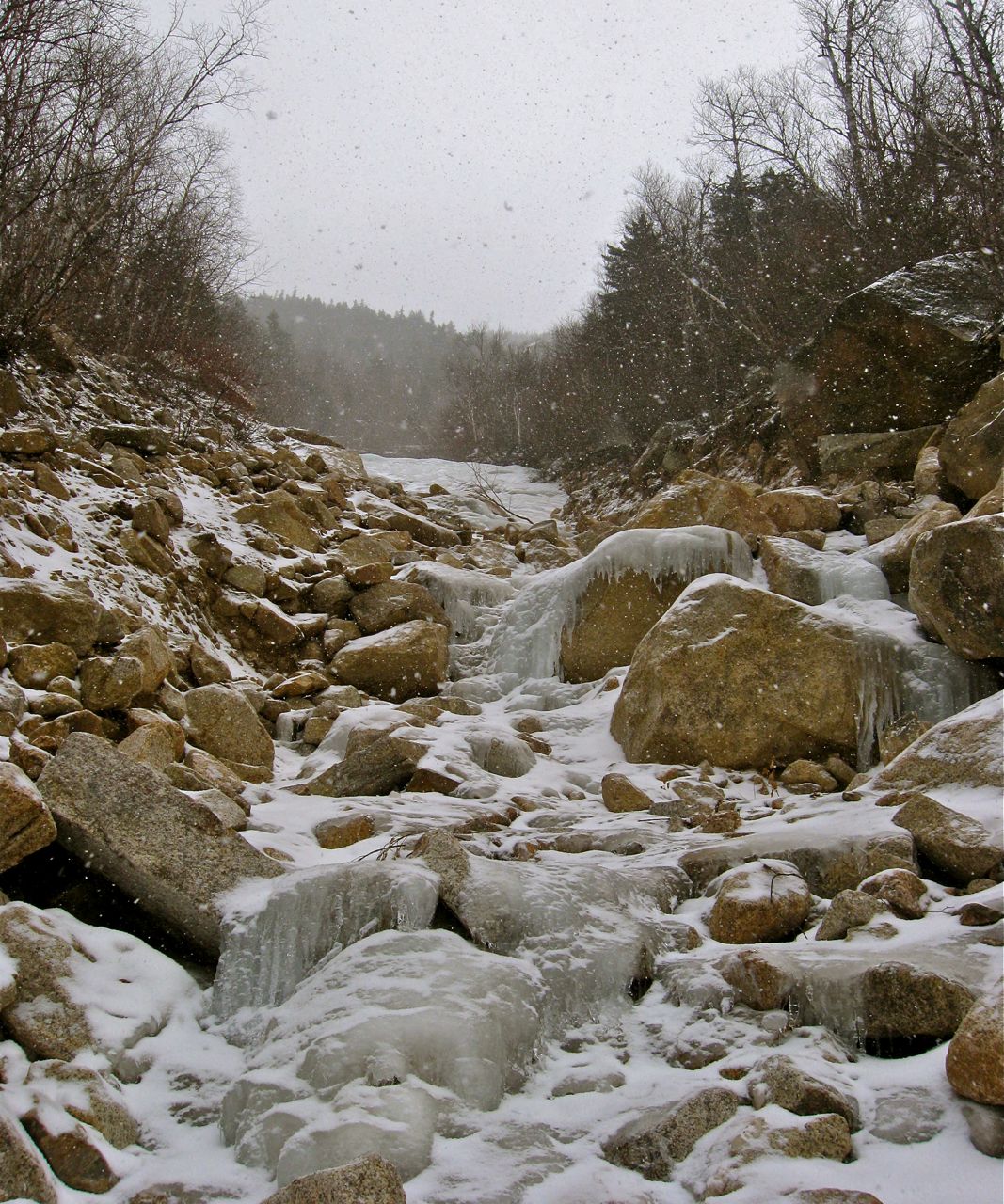 This landslide scar is the longest, continuous line on Webster  and is a gem  of a route with little snow. Long before the leg burning, low angle slab ( top in the shot  above ) a narrow cascade of ice meandered downward through the lower reaches of the boulder strewn gully.  I put on my crampons and roll along this. Moving up this frozen water like a part of it, but in reverse fashion from which it was formed. 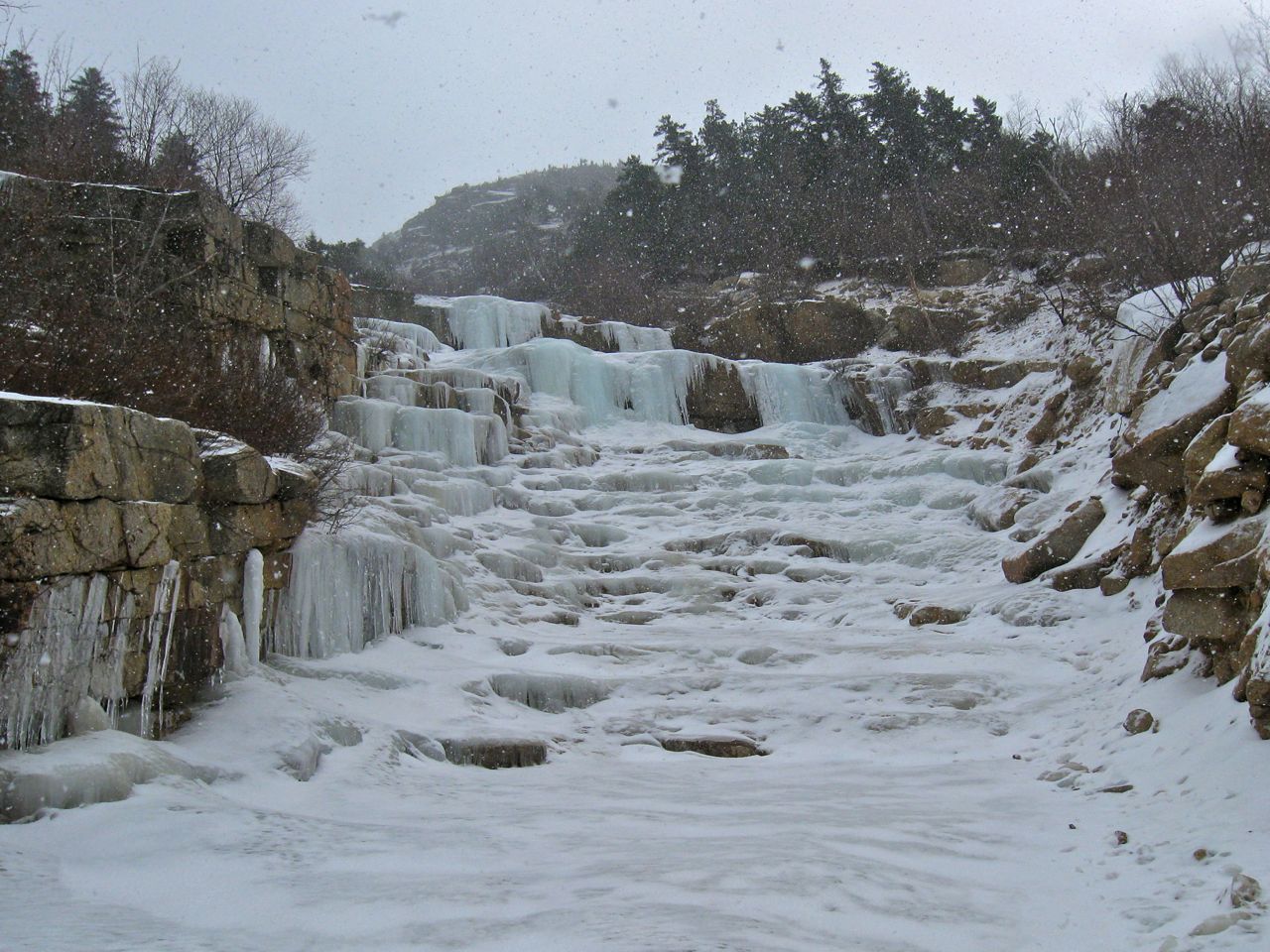 After the calf burning slab one rounds a corner to the headwall section. These two tiers had beautiful, soft columns to ascend. Above this the meandering cascade continues for some distance. Then the exit slot appears. This deep gash is similar in form to the Cleft on Mt.Willard. Very hidden and only revealing its beauty to those that venture to it’s door.  The bushwhack to the Webster Cliff Trail is short and easy. I use the walking along this trail as a rest for my legs before what I know will be a tense descent of the Mountaineers Route. This line has a very long talus tongue that will have about eight inches of snow on it. I feel a healthy dose of butt kicking will be coming my way all too soon. 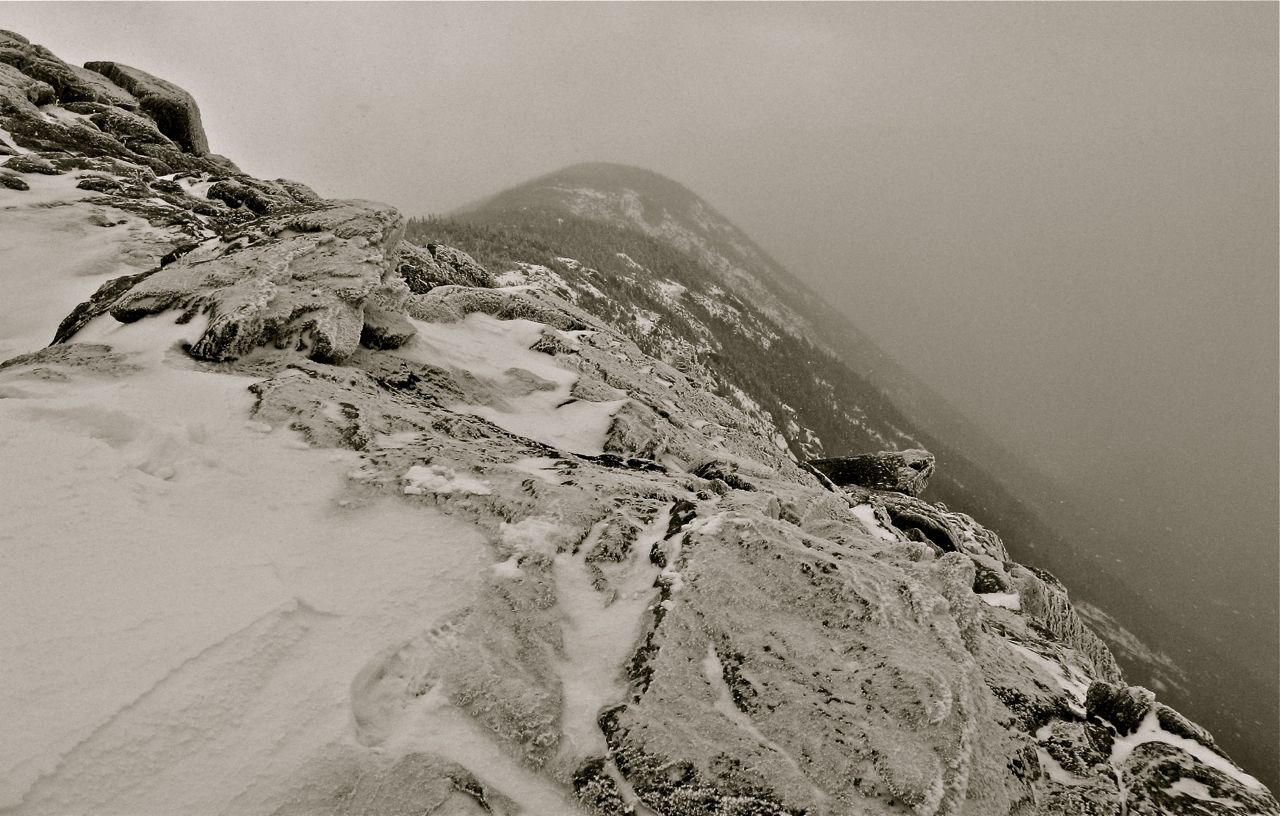 Hiking along the ridge is wildly beautiful. The wind has picked up, the feel is pure winter and not a soul is around.   From the summit  I move down a steep exposed section to the main opening of the Mountaineers Route.  The talus is as I expected,  loose and covered with just enough snow to make it a major epic.  However off to the side I find a little ease.  The scrub and trees offer better ground and more snow has accumulated covering some of the roughness.
I descend fast and in a blink of an eye, the deeper snow disappears, the woods thicken and I’m back on frozen brown ground.  My movement down is an uncontrolled, reversed version of Tarzan.  At last I come to the Gallery area.  This is an excellent place to climb, one totally overlooked though in plan view from the road.  From here I traverse the base of the huge rock slab that becomes the left side of Central Couloir.   The footing is treacherous, a light dusting of snow covers waxy  oak leaves, roots and sticks. Another body beating takes place.  My legs are tired and cramp up something awful.  I’m hobbled by spasms and  begin to doubt  if I’ll be able to climb Central. 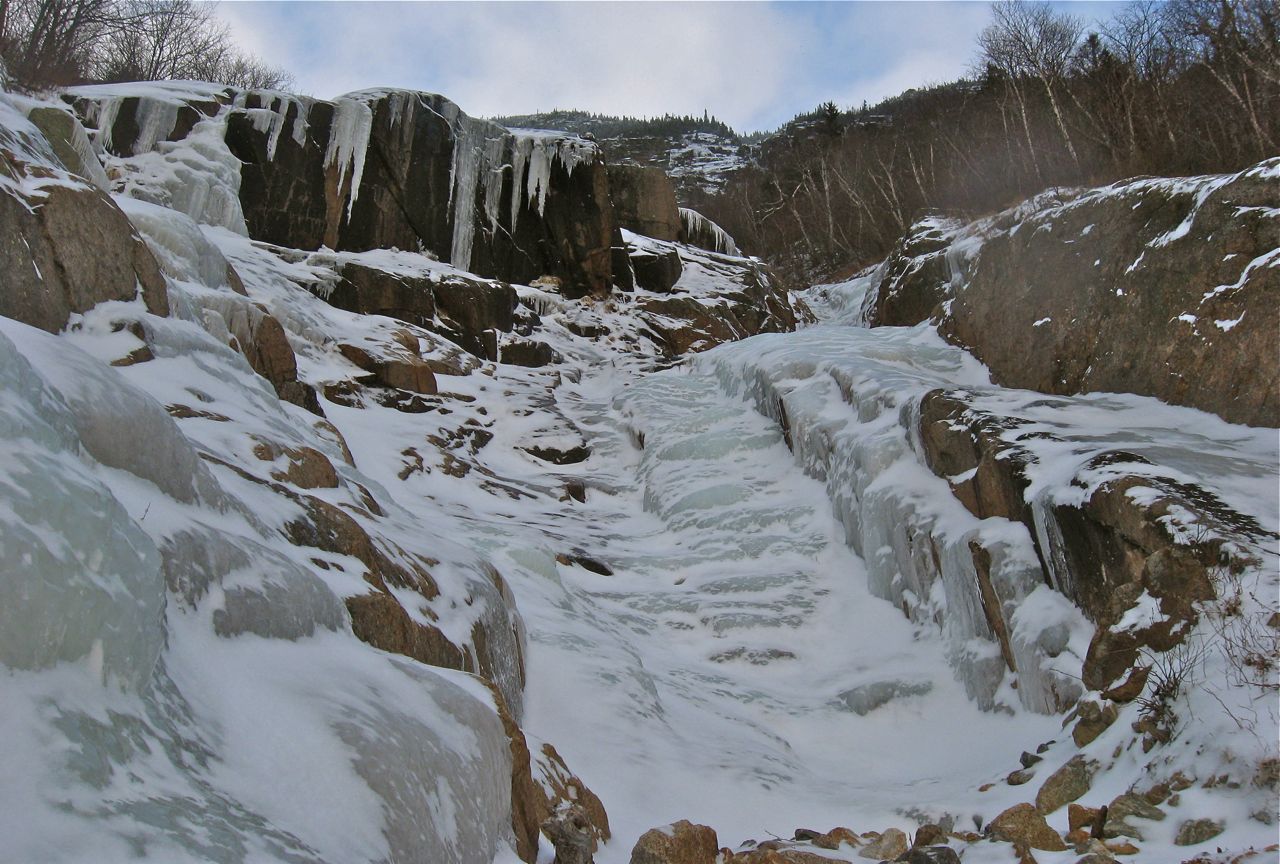 When I arrive at the start of the route my legs are sore and close to being sloppy dead but the cramps are gone. The start of the route is thin but soon it becomes another awesome connection of ice walls and slabs. At the upper cliff band I have to call the day.  To do one of the finishes would be hard and there is no easy way out.  Not to mention I would have to descend ether the Mountaineers Route again or take the Webster Cliff trail back south and the road back to my car. 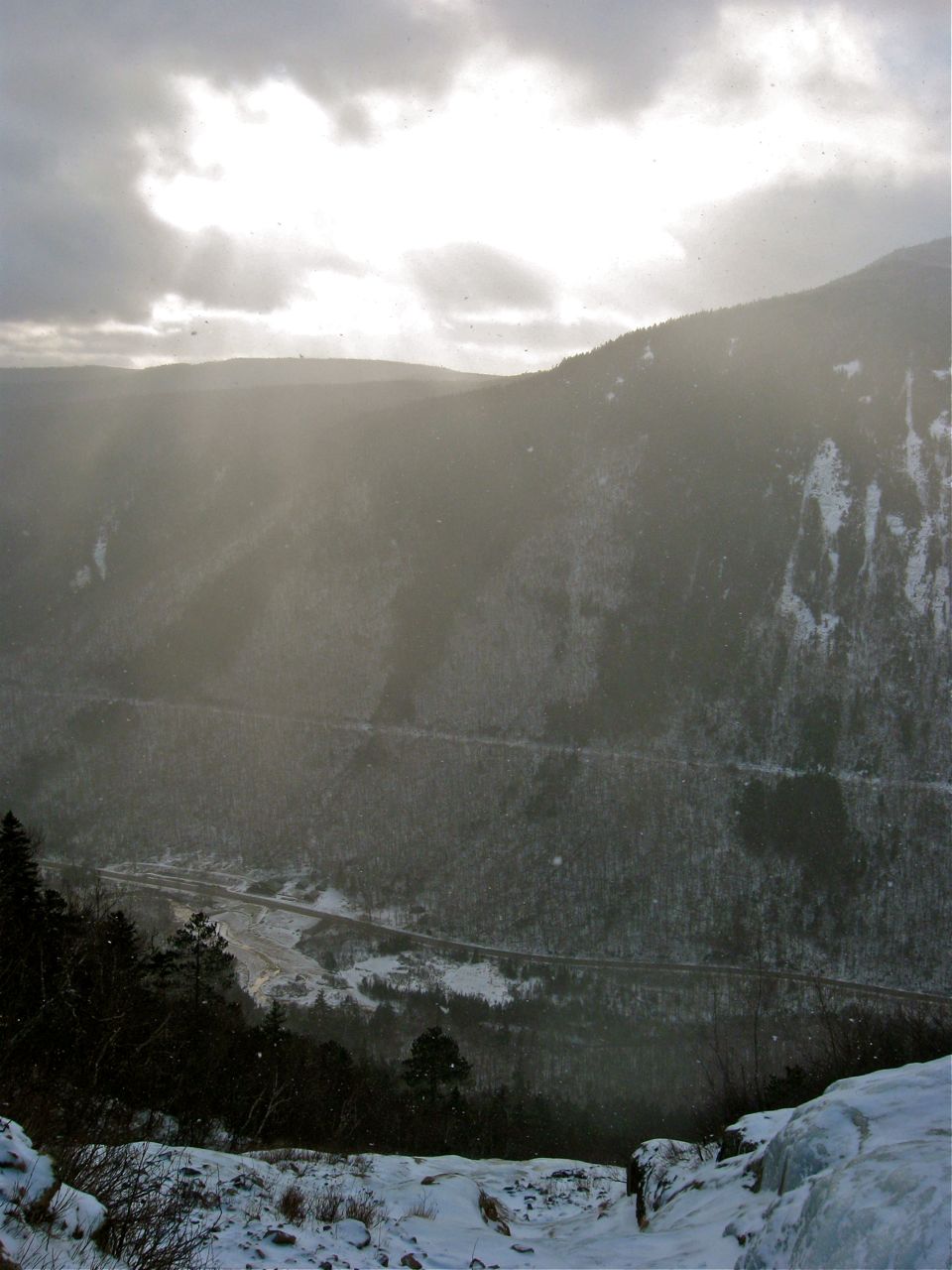 The Willey House in Crawford Notch

The journey down to the Willey House parking from my high point will be no easy task.  I chill for a moment and enjoy the place I’m in.  After a few photos I begin my descent through the woods on the south side of Central.  One last marble run takes place.  Except this time I’m completely spent . However I have beer in my car and get one more click of energy out of my body so it all balances out.