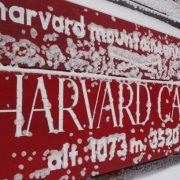 Happy New Year! It’s been a while since I’ve been able to get my hands on the keyboard for any length of time. Holiday week was quieter then anticipated, New Years Eve was rocking, and the first week of 2012 was unexpectedly jam packed – inside and out – despite the persistent talus!

So far this season, an extra value point should be added to commitment ratings attached to climbable ice routes in New England! Thankfully, (hopefully) getting to the cabin and into Huntington Ravine will be a wee bit easier after our first major winter storm system of the season is done gifting us with much needed snow! It’s been dumping all day…..it would seem that winter has FINALLY arrived! Here in the White Mountains anyway. As with most of the country, I’m sure you are still dealing with persistent warm temps and rain! It seems you now have an opportunity to escape to a bit of winter! Come on up!

As much fun as it was skiing the 6+ inches of low-density, super dry, east coast POW, as I headed down the Sherburne Ski Trail this afternoon, this storm is going to be hard-pressed to provide the snow-totals we could really use. The water-bars on the Sherb are far from full. However, I’m not complaining, it now looks and feels like winter! The turns were soft and velvety and, for now, the trails are pleasantly skinnable. It was surely dumping on the Rock Pile today. Arriving at Pinkham, I was even tempted to throw down some dinero for some lift service this afternoon but was curtailed by “early season” hours of operations at the local ski hill. Oh well, it can only get better from here on out! Keep your fingers crossed!

Even before the new snow fell, the extended early season had yielded a few turns here and there. I’ve had a couple of great days skiing in Tuckerman Ravine. Of course, it’s quality over quantity. From lower angle aspects in the bowl to top-bottom runs in Left Gully, powder stashes to frozen debris, it’s all been there. In all honesty, however, there  haven’t been many skiers on the mountain so far this season and for good reason. Mainly, the approach and egress. Furthermore, snow pack conditions have been variable and testy, even before 5-Scale Forecasting began for the season. If you haven’t already, you can read about a few significant early season incidents that have occurred over the last couple of weeks. Definitely worth the read and to serve as a reminder of the dangers that exist in the playground we all know and love! Click Here to read the summaries for incidents so far this season. If we take time now to prepare ourselves mentally, perhaps we can prevent the need for further entries this season.

Speaking of which, if you haven’t heard, the 5-Scale avalanche rating system was implemented for the season on January 5th, 2012. It was a long time coming, but conditions finally warranted to move from General Advisory. We can now expected daily updates on Avalanche Conditions in Tuckerman and Huntington Ravine along with a the other normally forecast areas like Hillman’s Highway and the lower snow fields. But, you already knew this because you visit http://www.MountwashingtonAvalancheCenter.org everyday or are otherwise informed through the variety of Social Media Outlets that the center uses to get the word out! There is no excuse not to know before you go. If you are unfamilar with the system, you can learn more by Clicking Here. and, if crossing paths, be sure to thank the hard-working and super dedicated Snow Rangers we are fortunate to have here in New Hampshire!

Finally, a much needed and very much appreciated sign pointing mountain travelers towards Harvard Cabin, as been posted at the intersection of the Tuckerman Ravine Trail and the Fire Road. Since I’ve been caretaker, and certainly with the delayed opening of the Lion Head Winter Route, many guests have arrived at the cabin via an unintended visit to Hermit Lake. Always a thrill for the Tux Caretaker, especially around midnight on a Friday night. It may be the smallest sign in the White Mountain National Forest, but it sure is appreciated! As I’ve been told all of my life, “Good things come in small packages!”. Once again, Thanks to the Forest Service Snow Rangers for making this happen! I should mention, that until the thick of winter, taking the Tuckerman Ravine Trail to the Fireroad is the preferred and most efficient approach to the cabin. Even with a full winter snowpack, the well-travelled Tuckerman Ravine Trail is the fast and easiest means to getting to and from the cabin, especially at night.

As the weekend approaches, details of the Mount Washington Valley Ice Fest 2012 are emerging daily! New guest guides are being announced, more sponsors, and promotions, oh and don’t forget, Harvard Mountaineering Club will be part of the fun this year! So, get signed up for your clinics and get ready to have a blast picking your way trough the valley!!! It is w-IN-ter!

Well, it’s about time for me to head back up-hill. I’m happy to have finally had the time for another update. This weekend is looking extra-wintry. While Sunday is looking bluebird, the temps will be frigid and winds fierce and shifting. This is going to make the alpine extra challenging. Included in this challenge will be dynamic snow and avalanche conditions. You should look forward to tomorrows Weekend Update from the Mount Washington Avalanche Center, posted at http://www.mountwashingtonavalanchecenter.org.

If we are forced to stay low this weekend, stay postive! The season has already been quite delayed already and, as I tell guests every week, if you are patient this mountain will reward you. This weekend maybe what the mountains needs to finally complete it’s transition to winter, making mountain travel safer and easier. Give The Rock Pile the time it needs and you are sure to enjoy a long and productive season.

Be Safe, Be Conservative, and Be at Harvard Cabin,

NOTE – Harvard Cabin is not affiliated with the Appalachian Mountain Club. Harvard Cabin is maintained by Harvard Mountaineering Club for use by the general public. The cabin is operated under a special-use permit granted by the USDA Forest Service. Cabin space and tent-sites are available on a first-come, first-serve basis between December 1st and April 1st each year. Specific instructions for staying at the cabin can be found online at