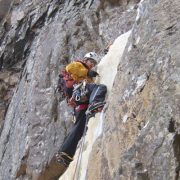 Cannon and I have a checkered past: I’ve backed off of more routes there than I’ve finished.  I’ve crawled my way down the talus after spraining my ankle.  Many consider consider Cannon their go to crag… for me, knowing I’m going to climb there the next day is a sure recipe for a restless night.

I first tried to climb the Black Dike in February 2009.  I had a week off from work, conditions were good in NH, and I was ready to go.  Unfortunately, as happens all too often, circumstance arose to ruin the best-laid plans.  My partner couldn’t make it up for our planned day to hit the Dike, and a week of climbing turned into a week of scrounging for partners with ever-declining weather.

By Thursday, I’d managed to find a partner for only one day and it was beginning to rain.  Fantastic conditions in the Valley were steadily deteriorating, but a forecast for colder temperatures starting Thursday night meant there was still hope that the Dike would be in.  Furtive pleas on the forums landed me an experienced partner, and it looked like I’d be able to salvage the week…

Moving through the rock traverse and swinging into the ice on the second pitch, things were not going as well as I’d hoped.  The previous night’s rain was followed by snow, and each swing brought about a cascade of flash-frozen snow and dinner plates.  My first sign of trouble, though, was looking up at p.2 and Nick (who’d climbed it a number of times) saying “I don’t want any part of that” when I offered him the lead for the sake of keeping moving and staying warm.  We’d made the slog up there, however, so I had to give it a try.  Needless to say, we bailed, tails firmly tucked between our legs.

In retrospect, I wasn’t really ready for the Dike.  Looking back now I realize I just didn’t have enough experience on the sharp end in less than ideal conditions to feel confident moving through thin, brittle conditions well above gear.  This experience only added to the mystique Cannon has held in my psyche:  where some only see possibility, I only saw the gates of Mordor. 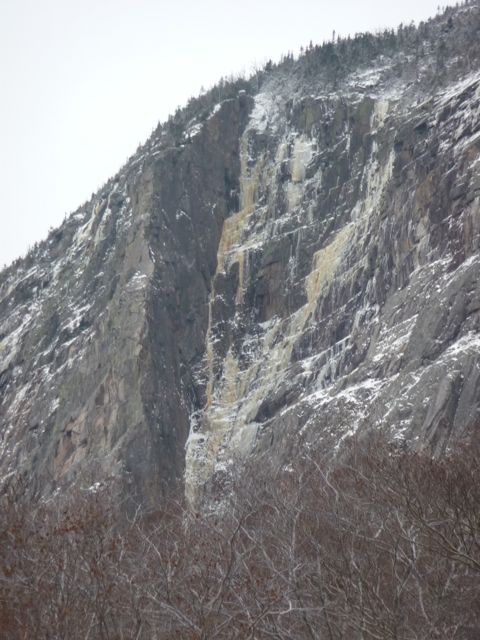 After seeing Erik Eisele’s report on climbing Fafnir on the 18th, it seemed like it was finally time to address some unfinished business.  With a 10am meeting at the climber’s lot, Chris and I were not the first to arrive that day, but we had a nice relaxed start and no one lined up behind us at least.  It was cold, but not so cold that standing around for an hour waiting for the party ahead of us to clear the 2nd belay seemed unreasonable. 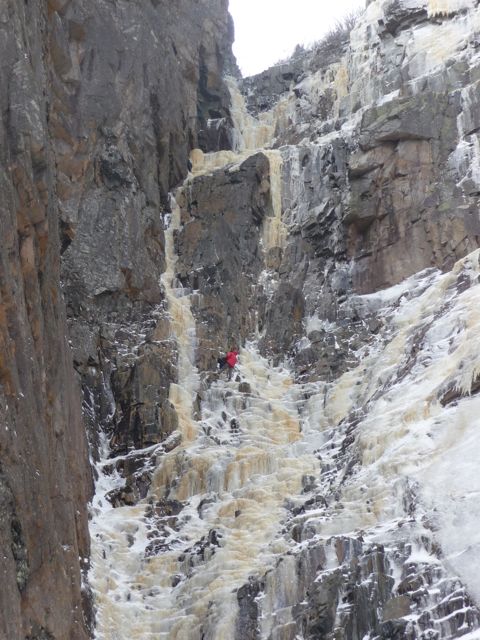 The early bird gets the fresh ice… while the sleepyheads get to sit around and wait!

After starting up, we found brittle ice on the first and second pitches, and wet fat ice to top off the whole thing.  Traversing through the rock traverse felt infinitely less terrifying than it was two and a half years ago, and the second pitch as a whole was one of the more enjoyable pitches of ice I’ve ever led.  Topping out, darkness engulfed us, and, while descending down the climber’s path, we were treated to a great view of the lights and civilization that awaited us to the south. 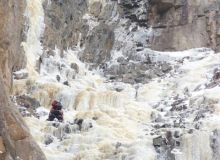 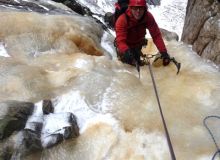 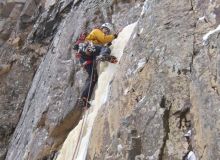 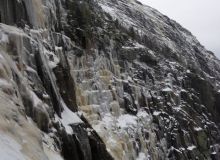 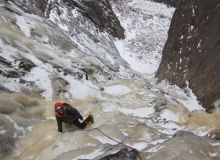 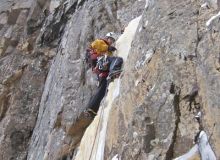 There’s nothing quite as satisfying as settling some unfinished business.  Climbing the Dike as my first real ice route of the season was not something I had planned, but it was an opportunity too good to pass up.  Looking up at Cannon from the Notch, I still see a dark and forbidding face, but I can’t wait to get back up there.