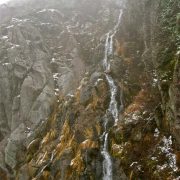 Is this just a dream?

Earlier this month, NEice staff meteorologist, Smike, hedged his bets and gave a gloomy November forecast for ice aficionados: “Warm temps with a short bout of cold over the next 15 days. (Go grab some extra rock time) End of the month will crash into winter and it should hang on this time.”

Recent evidence, however, suggests that he has not given us the whole story.

At first glance, Smike’s work looks like the work of a professional: it’s populated by maps and graphs, and includes fancy weather-related initialisms like NAO, MJO, and NKVD (what can I say, the guy has some scary connections). Furthermore, he can use the term “Bermuda High” without arousing the suspicions of a police K-9 unit.

Have we been mislead?

Despite his professional reputation, Smike’s recent actions call his veracity into question.  On facebook Smike posted “Has anyone seen my winter around here?”.  Shouldn’t Smike know that he didn’t predict winter weather this early in November, or is he holding back on a darker truth that lies around the corner? We take it for granted that winter will come eventually, but how far off is eventually?

Smike did not do himself any favors when this reporter contacted him about his prediction:  The meteorologist’s first words were “What my FAIL on weather?” – hardly the words we hoped to hear.  With the qualifications of our own in-house expert called into question, we were forced to seek outside counsel to get to the heart of the issue.

The Expert Weighs In

Sitting back on a folding chair on a beach in the Virgin Islands while sipping daiquiris, this is not the Jack Frost you know and love.  He looks haggard and run down, a man beaten down by his own biting winds.  His take on Smike’s forecast?

We're all hoping for something better than this!

“What do you want? I give you snow in October and all I hear is whining about it being too early, I didn’t get to send my 5.12 yet, I can’t find my ice scraper… nothing but bitch, bitch, bitch.  You know what, I like it here, so fetch me another drink and then sod off!” (who knew Jack Frost was a Brit?)

Undeterred, this reporter continued to push Frost about when we could expect his return to the Northeast.  Unfortunately, Frost’s comments  were not fit to print.

For fear of angering this guy (Jack Frost, not Mrs. Claus), Kris Kringle declined to comment for this story

Where does this leave us?

“Yeah so, I make this @#$% up. Put a Young’s Double Chocolate Stout in front of me and I’ll say whatever you want!” *  Smike graciously agreed to speak again after the failed interview with Jack Frost.  A disgustingly rich malt beverage in hand, he was much more forthright about his methodology when it comes to the science of predicting weather patterns: “You know, the guys on TV look at the facts and are right only about half the time.  Does anyone call them out? No. You figure I do this for free, so why not just make it up as I go along? It’s not like you’ve got anyone else waiting in the wings.” **

In this case, he is correct.  Whatever his failings as a meteorologist, it’s not like NEice has a plethora of weathermen jumping at the opportunity to bring us all bad news.  When pressed for a Turkey-Day prediction, he stood by his original claim: “I still think my 30/70 odds or ‘real’ ice holds ;-)” ***

*Not necessarily intended to be a factual statement

**Yep, I made that one up as well, sorry Smike!

***He actually said that one

Special thanks to Smike for playing along.  The weather right now absolutely sucks (at least for ice climbing), and Sunday is supposed to be absurdly warm.  Let’s hope Smike’s prediction for a cold and stormy December comes to pass!

Is this Ice Climbing?

Rhythm of the Seasons – Part Three
Scroll to top