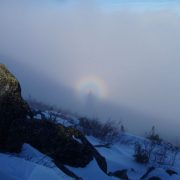 It seems like every year I find myself in the same position -I’m ready for the season to start, but that perfect alignment of weather, work, partners, and family commitments just isn’t quite right.  Working at a boarding school, I am fortunate to have the full week off for Thanksgiving.  With Doug and Alfonzo setting the bar so high in terms of making the most of the early season ice, I figured it was time to atone for my early season sins and get up north.

Whereas I had no partner lined up for my aborted adventure on Mt. Lincoln, I found a willing partner for a romp up to Huntington Ravine on Tuesday.  In addition to Doug and Alfonzo, some other NEice denizens managed to find some climbable lines in the few days before my break began, so it seemed like there would be hope.  At the very least, neither of us had ever been up to Huntington, so we figured it would be a nice hike.

With my partner coming from VT and unable to do a particularly early start (something about grad school and a group project the night before…), we were heading up around 7:00am and were at the base of Pinnacle by around 9:00.

We weren’t the first ones into the Ravine, but what we saw wasn’t promising: two climbers trying to scratch their way up something between Pinnacle and Central, only for the leader to lower off of some shrubbery about 20′ up. Part of the game with chasing ice this early in the season is avoiding the sun at all costs.  Odell’s looked climbable, but also like it might disintegrate under a climber’s weight.  As my buddy said, “I’ve seen better ice in my freezer!”

Undeterred, our 2 new friends from Quebec set forth for the top of the ravine via a contrived line of bushwhacking somewhere to the right of Central.  Knowing I had the weekend after Thanksgiving (and a forecast with colder temperatures), I opted to call it a day of taking the tools for a walk and headed back to Pinkham.

By Thursday evening, I had successfully relocated myself from the holiday’s festivities in southern CT to basecamp for the coming days in northern NH.  I was primed and had the alarm set for 3am, at least until I saw Leaf’s conditions report from that day:

“For the conditions report, I will write a series of haikus. The title is: HEIN

Rotten and hollow /A waterfall underneath /That describes the ice

Goggles, face mask on/ Then the snow above the ice/ Waist deep swimming – hmm

Snow slide potential?/ Gained the ridge between gullies/ That wasn’t easy either

Finally the Garden/ Beautiful undercast seen/ There was a rainbow 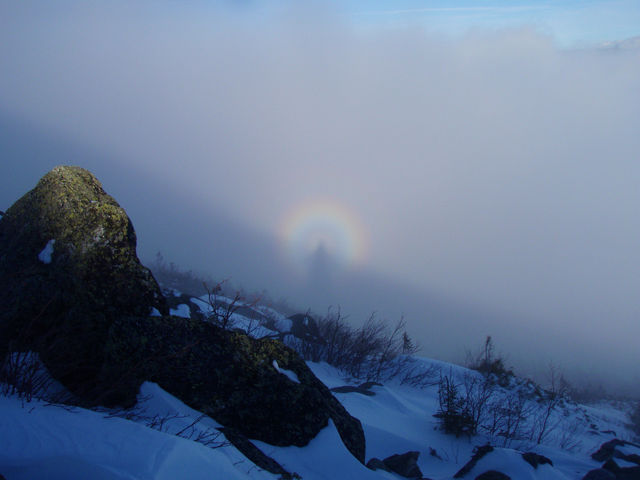 Leaf’s reward after a hard climb

Now, although I have never met Leaf, I’ve seen her contributions on this site enough to know that if she found it sketchy, I wasn’t going to find it any better the next day.  Foiled again!

Nevertheless, I managed a fun day of cross country skiing on Friday with my family, while Doug and Alfonzo also managed some non-vertical fun in the mountains.  The ice may be fickle, but it’s good to remember that there are other worthwhile pursuits than chasing cascades of frozen water.

My quest for early season ice in November has sadly come to a close.  Temperatures finally seem to be moving in the right direction, so perhaps this weekend will offer up some fun frozen treats for those of you who are able to get out.  Although working at a boarding school gives me some pretty sweet breaks, this weekend I’ll be experiencing the double-edged nature of my work -weekend dorm duty.

Give it a week or so, though, and I’ll be back out there.

Rhythm of the Seasons – Part Three