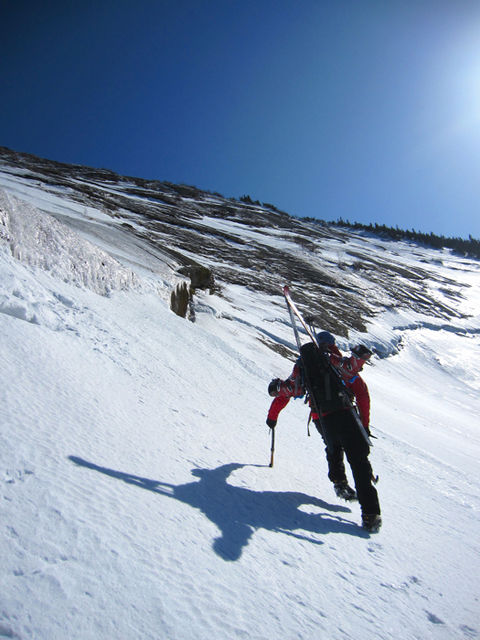 The ice climbing season is coming to an end and the lower elevation climbs are melting away. But for the die hard ice climber, the best climbing  is just beginning. The snow in the higher elevations is consolidating,  the nights are cold, and the days are long and warm, Spring climbing in the Alpine Zones of the Northeast is one of the best experiences an ice climber can have. Make your plans now and get out before it all melts away.

Enjoy these  recent photos from “The Zone”

The American Alpine Club awards more than $50,000 every year for projects ranging from worldwide exploration to local conservation. The application deadline for two of the AAC’s more prominent grants, the Lyman Spitzer Cutting Edge Award and McNeill-Nott Award, is January 1, 2011. Deadlines for other AAC grants are quickly approaching.

Some AAC grants specifically target climbers under the age of 25, fund research in alpine areas, and promote conservation projects in mountain regions throughout the world. Althea Rogers, Mountain Fellowship and McNeil-Nott grant recipient, has praised the AAC and what its grants offer: “I do not know of any other organization which so directly encourages its members to explore and challenge themselves.”

“There’s no doubt that the grants have enabled some of the best American alpine climbs in modern history,” said Kelly Cordes, Senior Editor of The American Alpine Journal. He added that such a feat was “especially impressive, considering that only one of the grants is specifically targeted to those attempting cutting-edge climbs.”

The AAC would like to support your trip, no matter its focus: trad climbing, big-wall rock climbing, alpinism, conservation, or scientific research. For application resources, deadlines, and further information about AAC grants, visitamericanalpineclub.org/grants.

One of the worst moments in every ice climb that is near the edge of our ability, is that instant when you stand with your tools in the ice, but your feet still on the ground. You’re looking at your belayer and he or she gives you the nod and its time to go. You feel the flush of chemicals course through you from head to toe. A more than reasonable doubt exists as to whether or not you can do it. There may be dread or a feeling of being over whelmed by the task at hand. You may even feel a little doomed as you bring that first foot up to start the process. You may even feel what I have felt on a number of occasions, “What the hell am I doing here?” So you commit to the route and lo and behold, it does suck to be you. The ice is worse than you hoped and it feels steeper than vertical. As you stop to place the first screw, the ice is airy and brittle. The screw won’t start, so you chop away some more ice and peck a little starter hole to help the screw get going, but it doesn’t help. Finally you feel the threads catch and you twist it home. The problem is, that half way through, the screw hits an air pocket and spins in with no resistance the rest of the way. It wobbles as you try to clip it. You start to feel the pump coming on almost immediately. Panic sets in and it’s time for either retreat or a real epic…

We’ve all been there. Grade III or Grade VII it doesn’t matter, if it’s near your ability you will undoubtedly encounter at least some of the fun described above. What the next two “IN PRACTICE” pieces will deal with is how to eliminate as many of epic makers as possible. The causes for our meltdowns are many, but can be divided up into two categories: The Physical and The Mental. This “IN PRACTICE” will deal with the physical  details that can enhance or derail your efforts. The physical factors I am referring to are not your fitness, but rather all the actual implements and the physical circumstances that can affect the outcome of your performance. The next “IN PRACTICE” piece will deal with  how to influence the mental and psychological circumstances of a difficult lead. These  conditions obviously include will and courage but also include a number of relatively easily amendable attitudes and assumptions that are often undervalued or overlooked. Taken together the sum of these parts can change a routine ascent into an emergency room vacation or, if properly applied, change an out of control “Shakefest” into a difficult, but memorable personal best.

The physical manifestations of ice climbing are many. From the medium itself: the flow of ice we’ve chosen to climb, to the instep strap of our gaiters, everything used to ascend has weight in the relative difficulty equation. Lets start with our mode of expression, the ice. Ice is by its nature a changeable medium. We can use this malleability to shape our ascent; even shape our experience with it. Hooking up fragile features with little or no protection during an early season foray is completely different than thunking hero ice in 28 degree March afternoon. You are in charge when and where you go climbing and you are in charge of what routes you do. Be careful to chose your ice climbing objectives to match your needs. Early in my career, being in Canada in March helped me to have the confidence to tackle big routes right at the edge of my ability. The solid blue single swing ice meant that I would have good gear to keep my head in the game and the ease of placements allowed me to marshal enough power for the crux. Conversely, these days easier routes of wonderful quality often times are left untouched. With limited time and unlimited ambition I have often neglected easier classics in favor of an at my limit hit list. Early season ascents have changed that somewhat. By visiting areas right at the start of the season, I have been forced to backed off of climbs two grades below my “normal” ability and have put adventure into routes that I would have normally left for retirement days.

The knowledge of how ice forms and having enough experience to know what to expect, can make a difference in how we go about our ascent. After years of climbing steep pillars I finally started to notice some patterns in the way they formed and the way the difficulty was laid out due to those patterns. In most cases the first 15-35 feet are the technical crux of the route. Because it is the last section of the climb to form, the ice at the bottom of the pillar is more aerated, more brittle and steeper than anywhere else on the climb (umbrella roofs excepted). Obviously knowing this gives you a psychological edge, which I’ll talk about in the mental factor section. But, there are also concrete steps you can take if you know this information. Where are you going to stop for the first screw? Because the ice will most likely be funky, always make sure the first screw on your rack or clipper is a 22cm(long) one and that you have a screamer for it. Look carefully to see where the telltale white/gray ice gives way to blue. Is one side of the pillar a better color or better consistency (even if its steeper) than the other?  Lastly look for rests-mushrooms to stand on, grooves to stem, or subsidiary pillars to lean against or stem out to and plan your ascent around them. My biggest mistakes on those early test piece leads were failing to look ahead and failing to reap the benefits of foresight.

There are two other physical contingencies’ that affect your experience on the lead. The first is the set-up of your gear. The second is the mobility of your clothing system. The single most important lesson I can teach you about gear, is that it needs to be dialed in to the point of invisibility. Your tools leashes, your racking system for your screws and other hardware, your crampon straps-basically every piece of gear you climb with needs to be set up correctly. The experience you are looking for, is one of having all your gear work together so well, that you never think about it. Every time you have to fight to get the right size screw, every time your leashes come loose, every time you are taken out of the moment to deal with circumstances outside of the climbing, you have failed. It might be as minor as a single curse-it might mean a leader fall. Take the time to have your gear in order before you launch up that cauliflower pillar, and you experience will improve immeasurable

The last issue I want to touch on, is mobility. Once again the principal I want to stress here is invisibility. Gone are the days when a set of heavy Gore Tex bibs and jacket was the only real choice to climb ice in. by taking advantage of “soft shell” technology, we can feel much more like rock climbers in tights and a tee shirt than a knight in armor. Scheoller, Powershield, and a host of other like fabrics have set us free. By taking advantage of these stretchy warm and durable fabrics we can let go of another distraction and concentrate more on the matter at hand-surviving our lead. The energy savings that come from unencumbered movement can be put towards the crux.

Taken together, all of the physical factors I have talked about can make a major difference in your next difficult lead. I hope you will take advantage of my learning curve. Next time I’ll talk about the intangibles that come in to play on difficult leads.