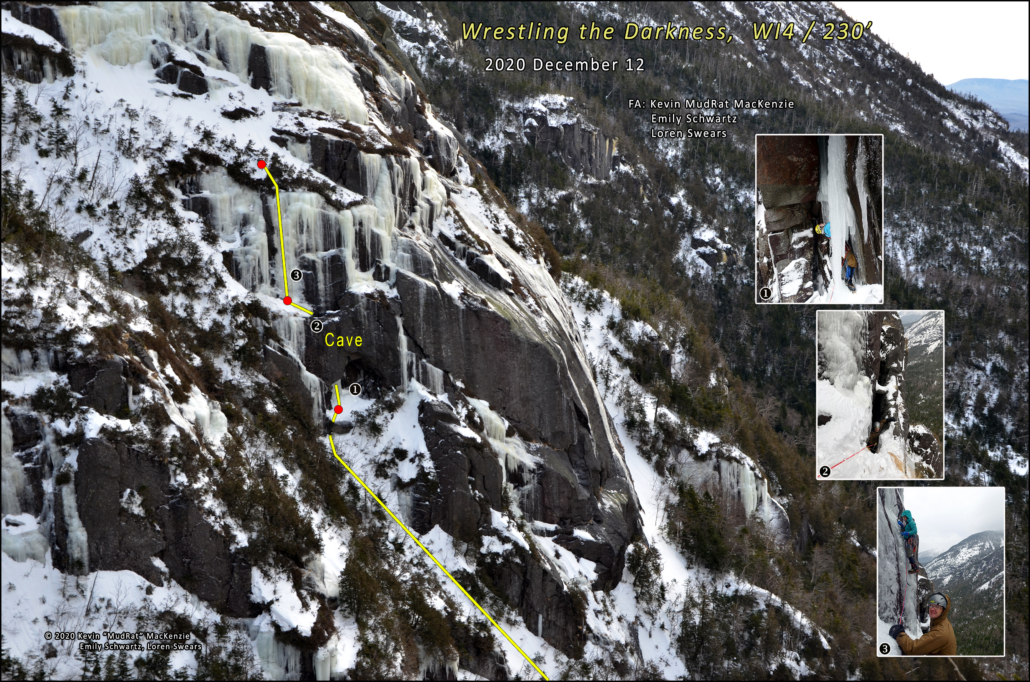 A warm front with rain in the forecast settled over the Adirondacks for the weekend of December 12th. I’d no plans to do anything except work around the house. An email from local climber Emily Schwartz wanting to do something “adventurous” changed my plans. Maybe run up the Trap Dike? Hmm. I didn’t have any grand ideas until I received a message and photos of the ice on Marcy’s cliffs from a gentleman that trekked into the Gorge on December 5th. Conditions looked promising. Thus, an outing was hatched with PG veteran Loren Swears in the mix. This would be the earliest December ice we’ve climbed in Panther Gorge if it worked out.

We started according to the usual timeline—4 a.m. at the Garden in Keene Valley with expectations for a long day. The outing’s timing was tricky with the late-day rain in the mix. We wanted to exit the Gorge by late afternoon to avoid getting miserably wet. I held concerns that the trail conditions from the week before—miles of mud—might slow the approach, but a thin covering of packed snow and frozen ground allayed those worries.

The sky lightened and clouds lifted at 8 a.m. after hours of hiking through a light mist under the glow of headlamps. Seven miles from the trailhead, Little Marcy’s ridgeline was still obscured, but there was thick ice on some of the cliffs. Perhaps the strong sun the day before didn’t beat the lines into submission. We entered the Gorge at 9 a.m. and saw the ice lines of Haystack intact, at least those in gullies. Most of the curtains or smears appeared to be delaminated. I prepared for the worst as we pushed through the trees. The day might be spent sightseeing and not climbing.

Soaking wet walls greeted my gaze. Yes, the ice had taken a beating. A day earlier and we might have found something on the Panther Den, the first large cliff in Marcy’s array. We discussed the options—I usually have alternatives in mind—and decided to try an obscure line on Haystack, one that I hoped was intact despite the warmth. Our target was a gully/cave climb immediately left (north) of the largest slab on Haystack where I spent a portion of my efforts this past summer. I had rappelled the gully and, partway down, studied an interesting fracture cave. The gully and cave walls were both excessively wet. The downside was a long bushwhack across the Gorge and a lengthier day than I had hoped. Our energy was good, we had the gear for foul weather, and the hour was young so why not?

We located the bottom of the gully at 10:45 a.m. after a 6 ½ hour approach, pulled out the double ropes, rack, screws, pitons, and stuffed Loren’s pack full of necessities. The gully was an easy WI2 climb up snow, frozen turf, and short steps of ice. We soloed up and stepped to the right at its top. Crawling under a fallen block led to the cave. Two pillars of ice adorned the left side. One disappeared up into the dim light. We were in business. I inspected them from various perspectives as Emily and Loren arrived and looked at the scene. I was overjoyed to have an option that didn’t involve rotten ice. The climbing looked fun and intriguing.

I offered Emily the lead, but this was her first climb of the year, so she relinquished it to me…for my first climb of the year on vertical ice. A couple early season trips scratching up Gothics North Face and the Khyber Slide on Upper Wolfjaw Mountain gave me the confidence that my “lead head” in the right place.

The icicles that hadn’t touched down were sun-compromised and in the way, so I cleared them before starting up. Voids between the left pillar and the stone promised some interesting gear placements. 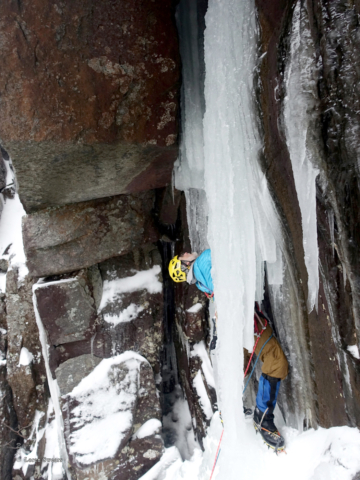 The shaded ice was in perfect condition…hard and clear. Ten feet up, I lodged myself between the pillars, my back against the right-hand flow and worked at tossing a carabiner through a ¾-inch slot so I could sling the ice flow as protection. I remembered why I do not play basketball. Five tries later, I had a bomber piece of gear in place. Higher and after considerable grunting, I found hex placements between the rock and ice. Swinging the tools was awkward in the confined space between the pillars. Graceful movements went completely out the door when I transitioned into an eighteen-inch wide squeeze chimney/cave as the left-hand pillar petered out. Once in, I relied on a shallow stick with a tool and a mantle to squirm through the relative darkness. I then wrestled through a trough of deep snow and climbed back into the light. A short, exposed traverse led to a comfortable belay point with an expansive view.

Loren assumed the role of photographer/videographer while Emily followed. Meanwhile, I studied the ice on the third and final pitch while scrutinizing the weather. The flow that fed the cave was thin but well-bonded despite the sun. Once Emily arrived, I asked if she wanted to lead. The climbing was straightforward though protection wasn’t as good. She mulled it over while Loren inch-wormed his way out of the cleft. All the while, the clouds got lower and the wind gathered strength.

A few good sticks and a solid 13-cm. screw at the start gave Emily the confidence she needed to take on pitch 3. 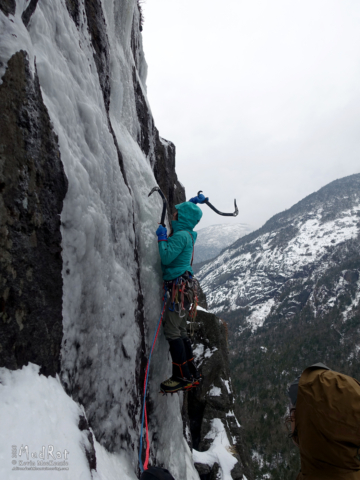 Exposed climbing against the moody backdrop of Mt. Marcy and its shroud of gray set a dramatic scene. Distant ice lines—probably Agharta—popped in the warm weather. The sounds did nothing to instill inner tranquility. It didn’t take long until she was battling the canopy of cedars guarding the finish. Loren followed as I took the camera. By the time I stepped onto the ice, it was a bit drippier, and the spectres (backed by a nut) in the anchor guarding my stance were slightly loose from melting out.

We finished the new line at 2:30 p.m. just as the weather signaled more strongly that it was time to rap it up. Emily slung a thick cedar and rappelled over the edge. Loren followed as I photographed the veiled valley below. The Gorge assumed an ominous tone with wind-driven mist. This moodiness added to its mystique and made me appreciate the bluebird days.

An hour later, we were packed and ready to begin the 8 ½-mile grind back to the cars. The bushwhack was arduous. We first descended into the central talus field then bushwhacked up through the mashed-potato snow. The jackets, most of the gloves, and the rope were soaked, so we enjoyed extra “training weight.” Our plan worked out in the end and we exited the Gorge in the daylight and arrived at the trailhead at 9:15 p.m., only 10 minutes after a light rain started. A few minutes later, the rain got heavier. Good timing!

Don’t Get Screwed!
Scroll to top