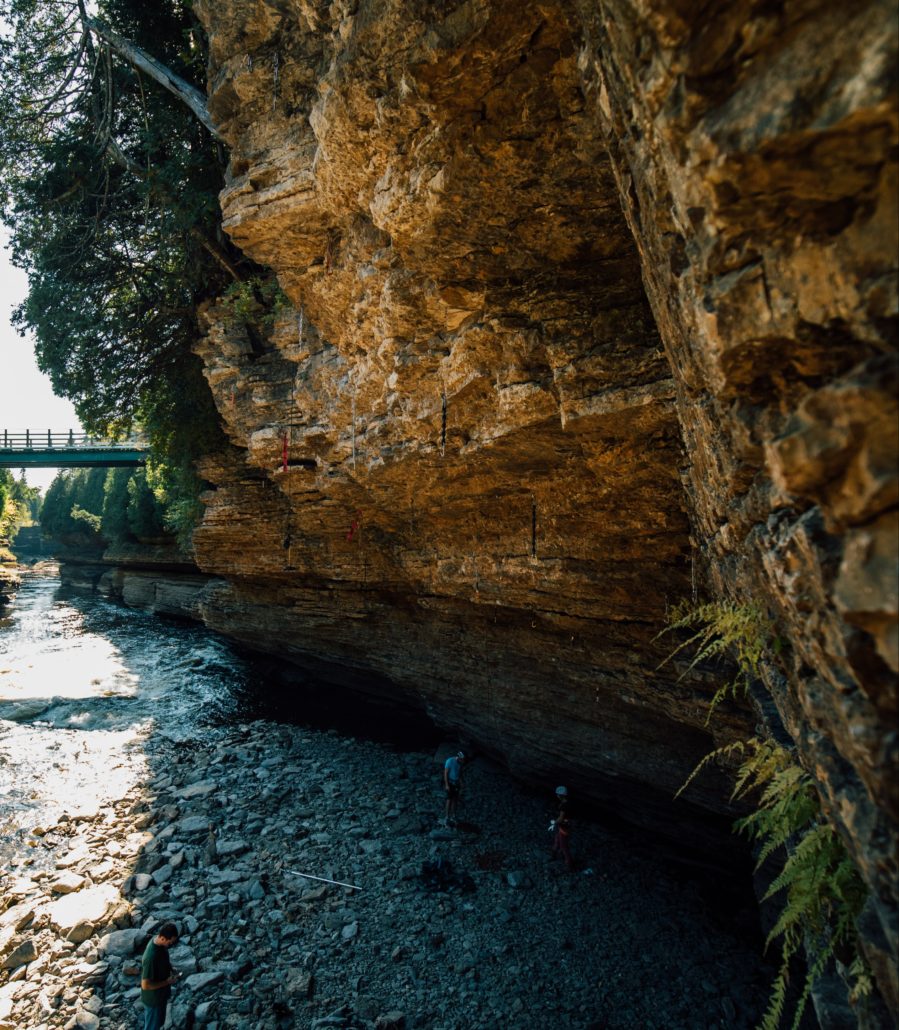 The cliff at St. Alban, Quebec

I had never been to St. Alban, a dedicated dry tooling crag near Quebec City. My friend Marty Theriault, who lives only ten minutes from the crag, had several times extended me an invitation to sample the steep chossy riverside cliffs. Marty was about to be deployed so we had to make the trip happen soon. My schedule had me freed up Sept 12th and 13th, which worked for Marty, so the planning began. Thoughts of the approaching winter season had us excited. The gears started turning as to who might be interested in the preseason trip. “Media Man” Jon Mercer quickly agreed. Mikayla Tougas, a super strong climber from New York, was in. Mikayla had just returned from Colorado where she sent several stout dry tooling routes in an attempt to become more familiar with the obscure subdiscipline. Before we knew it, we had six psyched adventurers ready for the midweek trip.

The 3:00 a.m. departure from my house came much too early, as such things always do, but we set off buzzing with excitement, and the six-hour drive flew by. I kept saying to my wife before we left, “Even if the climbing turns out to be terrible, the drive itself will be a blast with such a great crew of folks.” After pit stops for food and gas, we got to the parking lot for the crag around 10:00 a.m.  Crushing out the rugged approach got us to the base of the cliffs just five minutes later. Marty gave us a quick tour, and Mikayla and I promptly stretched our limbs on an M5 left of the main wall and then ran up a M6+ to the right of the main wall. Now it was time to fuel up for some harder lines. After Mikayla’s lunch of nearly half a pound of gummy bears and my lunch of “Biere Forte,” we began surveying our options, looking for something a little harder. “Libere des Liberaux” M9-, put up by Guy Tremblay in 2006, is an obvious perfect pick crack nearby that pulls up and over a small roof. It was just what we were looking for. Mikayla and I sent the route on our second attempt after we both wrestled with stuck tools in the exact same spot during our first go at it.

Amidst our earlier tour of the area, Mikayla spotted a line that traversed the entire roof of the amphitheater area. It looked like an obvious link up, and we agreed that our second day would be spent working the striking line despite our lack of info on it. With some literary digging, we soon discovered that the route had been sent by Canadian bad ass Nathan Kutcher in 2014 and was named “First Blood” M11. We were comforted by that knowledge as it meant the route would go. But, since it was a Kutcher route, it likely wouldn’t be soft!

Satisfied with a good day on steep terrain, we headed to Marty’s house for some après climbing fun and soon had the grill sizzling amid talk of the awesome Quebec ice. A casual start the next morning put us back at the crag by 10:00 a.m. Eager to get a taste of some real punishment, Mikayla and I went straight for “First Blood.” Mikayla gave it the first attempt. Unexpectedly powerful moves down low lead to a very positive hook under the roof. After looking around for a minute, Mikayla decided to try and move out from under the roof using a small sloping edge: Crux #1. She pulled a leg up into a figure four and suddenly picked-off into the air. Flash pumped and maxed-out on adrenaline, she pulled the rope and handed the sharp end to me.

I tied in and began to climb, feeling a bit unsure if I could pull off the route even if we could figure out this thin edgy roof move. Eventually, I reached the same demanding crux move under the roof. I went for the same hold that Mikayla used, hoping it would hold for me. No luck. A back-wrenching, upside-down fall ended my first attempt.

Mikayla and I talked it over. She tied in again. Her goal: to find a different hold that might allow us to make progress. There is a single photo published of Kutcher on the route during the first ascent. From what we could tell, it was taken at the same spot we were struggling to move beyond. His six-foot-long body can clearly stretch beyond what seems reasonable for  Mikayla and I to reach. There must be some hidden intermediate hold, we felt, tightly gripping our hopes for success. 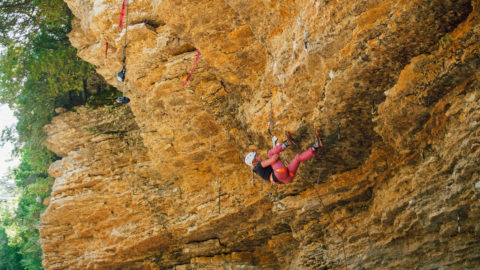 After leaning out off a solid pick placement for several minutes, Mikayla found a pencil eraser-sized positive edge that she felt confident moving off. Mikayla kindly ticked the hold for me. From the ground, I looked up filled with skepticism. I just couldn’t see what she was talking about.

I threaded the rope through the loops on my harness for another try.  The new hold we were aiming for was even farther away than the original one that spit us off. I reached the large ledge, setting up for a partially dynamic move to hit the hold. I had no doubt Kutcher did the move completely static, I thought, but I knew it wasn’t going to work for me. Hyped-up cheers from friends on the ground helped build my courage. I committed to it, surprisingly pulling through with little issue. I inverted into a figure four and snapped the rope through the nearby quickdraw.  As I tend to do when going from a figure four to a figure nine, I got the rope all twisted tight around my body. Now I worried: falling at this moment would would hurt, leaving me with rope burns on my ribs or worse.  No time to rest, I dropped into a one-armed dead hang, freeing myself from the entangling rope, then continued on. I made two more solid moves. Now I was feeling confident that I could probably get through the next roof section before pumping out. Anticlimactically, my right tool pick slid off just as I finished shaking out.

Mikayla is a stronger climber than I am. She moved solidly while cruising up again, flowing through the first crux with style. Her moves are methodical and graceful, whereas by comparison, I look more like an inverted video of someone clumsily falling down a set of stairs. Mikayla seems to have no pump clock, leaving the rest of us looking like mere mortals at the crag. Past the first crux, she eased into a steep corner with perfect placements in sinker seams. In fact, they were so solid that as Mikayla began transitioning into the second roof, her tool would not come loose. She worked it back and forth for a good three minutes. It finally came free, and Mikayla amazingly continued into the unknown terrain above. Just as she was in the meat of the second roof, she flew off, putting an end to her third attempt. 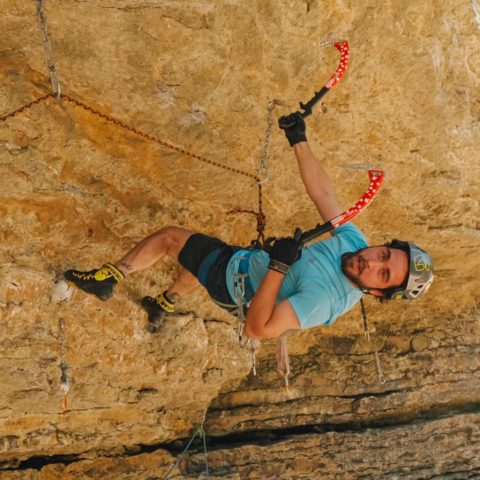 The really encouraging thing for me about Mikayla’s third attempt is that she screamed from trying so hard. That meant that I wasn’t the only one having to work at it. We both rested for a while knowing that if we just kept going back and forth immediately, we would run out of energy for more attempts. Mikayla and I discussed the second half of the route, wondering if we would encounter any more tricky sections. About thirty minutes went by. My muscles had lost their lactic acid burn. I felt ready for a third attempt.

During the entire trip, this was the first time I felt a bit nervous. I reminded myself that we were only there for training. Dry-tooling as training is excellent, but it is only a means to an end. The end being, in New Hampshire climbing guide Bayard Russell’s words, “to get to those cool-looking icicles.” And the fact that there weren’t any cool-looking icicles, helped me remember that it was just training. I tied in for attempt number three.

Unfortunately, during our rest, I had forgotten the beginning moves and was totally winging it. I set up for the first crux, hit the move second try, and continued quickly. Pulling up and over the first roof, I slotted into the sinker seams. Remembering where Mikayla’s tool got stuck, I skipped that hold and moved right into a shallow angled pocket. I was in new territory. From here, I had no idea what the moves were. I took a minute to shake out, then moved out into the second roof. Thankfully, the feet were positive here and the tool holds obvious. I could feel the pump starting to eat me up. Several moves traversing right led to some positive hooks, and suddenly I could see the finish anchor. Things start to go foggy. The burn is intense. Next thing I knew, I had sent the route without much fanfare. As I lowered off, I remember taking some time to shake out again and gearing up for the next several moves to the finish. I remember not wanting to blow it right at the end of the route because I really didn’t want to have to climb through those roofs again. But that’s all, I don’t remember what I did. I don’t remember the moves. That’s kind of how it goes, though. I think most folks can relate to when, in one moment, they are unsure if they can pull something off, but in the next instance when the thing is done, they aren’t quite sure if the thing was even hard.

As soon as my feet were on the ground, everything shifted into a new gear: supporting Mikayla on her next attempt.  I didn’t expect to send, but now that I had, I could be much more focused on her goal. 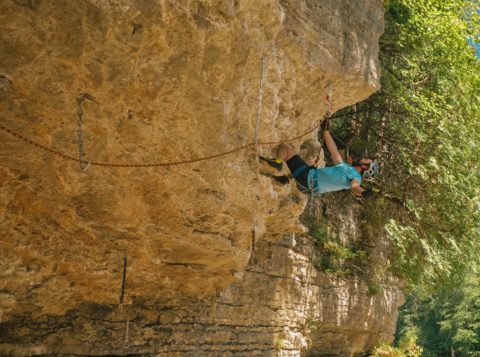 Once again, sorry to be anticlimactic, but on Mikayla’s fifth attempt, with some grunting and outbursts of screaming effort, she sent the route as well. We believe this to be the first female ascent. What a badass. To be honest with myself, I don’t think I would have sent if I had to give it five attempts, which speaks to how strong Mikayla is.

The rest of the afternoon our crew climbed some other routes and enjoyed each others company. The whole thing ended up feeling like a sendoff party for Marty. His winter will be spent overseas where he ensured us that he would build a climbing wall and be ready to crank when he returned. We’ll be thinking of you, dude. Thanks again for being such an incredibly welcoming host.