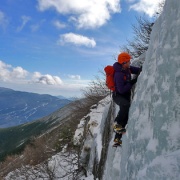 The Season is On!

Let’s take a look at the conditions and reports from this past weekend across the Northeast and go over what to expect for the coming weekend.

In Tuckerman Ravine, we saw a couple of climbers lingering around as we headed up Hillman’s Highway.  It was a fun day and we climbed some great ice!  YES, enough to satisfy our hunger.. for now!  The headwall ice was coming in well.  Here’s some photos from the day. 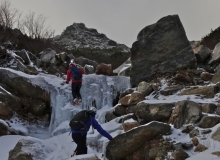 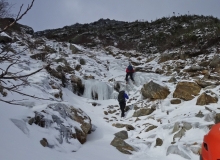 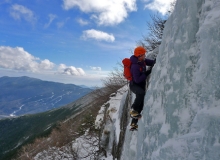 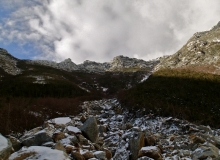 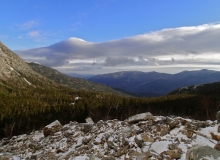 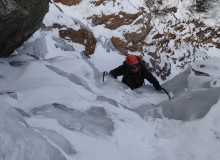 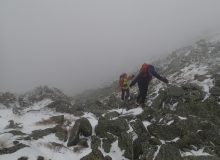 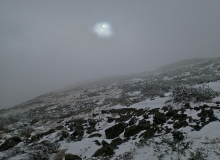 In Huntington Ravine, Pinnacle Gully was climbed by at least two parties.  They “found more ice then expected and in much better shape… Thin in some spots with running water, holes and some detached ice, but then again its still November! But overall WI2+ and able to accept decent protection.”

And over to Franconia Ridge:  Climbers headed up Lincoln’s Throat  Sunday and Monday to see what they could find.  The headwall was super thin, so both parties backed off and headed right across to the slabs and up. Alpineclimb noted the headwall “could have gone with a few stubbies and cams.”

The weather forecast for the White Mountains is calling for a slight warming trend through Thursday, but temperatures dip back down to the low 20’s and high teens on the summit of Mt. Washington starting Thursday night.  That’s accompanied by some snow flurries into Friday and the wind will persist all week. The warming trend should add some moisture in the high climbing areas as the snow melts slightly and the cold will return just in time to lock things back up!

Don’t expect any climbable ice in the lower elevations this weekend, but if it stays cold that could change. Look high, climbs with northern aspects and in shaded areas for the best ice.

Are you looking for a guide? For a Mountain Washington adventure? Contact one of our local Ambassadors and they will be glad to help.  Cathedral Mountain Guides – Mooney Mountain Guides

In Smuggler’s Notch, things are still pretty scratchy as temperatures just didn’t drop far enough to build thicker ice.  At least one party got out for some drytooling action though.  Tim Farr of PetraCliffs Climbing Center says “All in all, the Notch is coming along with ice slowly forming all around. It was just above freezing and ice wasn’t well bonded so I didn’t want to knock any of it down yesterday. Things in the Easy Gully vicinity are starting to form. Jeff’s slide has a consistent thin flow for much of it’s length as well.  The road is closed and has a thin layer of ice on it from melting snow as of yesterday. With the approaching cold snap, things should shape up quick in the Notch for some thin climbing.”

Taking in the view in Smuggs! Photo by Tim Farr

It’s looking like there will be more time to sharpen your drytooling skills as we wait for temperatures to drop below freezing, which doesn’t come until Saturday.  Even then, it’s a small window as the temperatures creep back up on Sunday.  There will be a rain/snow mix on Thursday night into Friday.

In the Adirondacks, Ian Osteyee of Adirondack Mountain Guides reports: “No real ice yet. There have been lines of thin ice forming on all the usual suspects, but nothing that has survived the warm days. After tomorrow the temps will drop and I think we’ll see our first real ice to climb next week.”  Once things get going, look out for Ian’s Condition reports here!

Jesse and Emilie, owners of Cloudsplitter Mountain Guides in the Adirondacks, just got back into town and are getting ready for the winter.  Driving through Cascade Pass with temperatures in the mid 40’s on Monday didn’t raise many hopes, but it appears the early season skiers are enjoying some turns already on the Mt. Whiteface Toll Road.

While you are chomping at the bit up in New York, you can pass the time reading a recent interview in this fun article, Ladies we Love, about mountain guide Emilie Drinkwater.

For a look at the current weather, the Mountaineers Web Cam in Keene Valley will let you know if it is snowing or raining.

While the forecast in the valleys and passes will be similar to that of Smugglers Notch, the higher summits are looking at temperatures below freezing starting on Wednesday night and precipitation will fall as snow.  So while the chances at Cascade Pass and Chapel Pond might be grim, the climbs in the backcountry alpine areas could be promising!

– For some more early-season stoke and thoughts on ice climbing,  see these articles on early season ice.

Get out and explore!  You never know what you might find!  And whatever you do find, tell us about it here on NEice!

Tips for the Early Season Ice Climber
Scroll to top