The Eastern aspect of Mt. Adams and the ice of Madison Gulf (lower right) Click image to make larger.

The Great Gulf  is a massive area shroud with mystery.  In the early years of hiking for many of us here in the White Mountains, the huge drainage of the West Branch Peabody River, the “Great Gulf Wilderness”  was a place filled with intrigue.  The remote drainage with its many tributaries, gulfs & ravines holds something almost lost to us here in the New Hampshire. And is a place that harbors silence and a true feeling of being alone.  Experiencing this area in summer or winter, total responsibility for one’s actions is paramount.  This is especially true during the winter months.  However, it is during this time when one perceives the rare peacefulness that resides here.  A peacefulness so complete, a single bird singing a short song goes right to the heart.  During all of my time spent out in the winter months, I try to mimic the quiet of this season.  A small and perhaps vain attempt at keeping human noise out no matter where I am.  Often I think to myself, this is what goes on, all the time, when I am not here. I’m just a blip on the screen in this environment and attempt to have my passage go unnoticed.

On the East Face of Mt. Adams, glowering above Madison Gulf resides a cliff.  The ice that hangs in various lengths and hues of psychedelic colours off this wall offer wonderful climbing in a wilderness setting.  At the end of a day your body will be tired and the mind satisfied with all it had seen.  This is especially true if the summit of Adams is reached after the ice climbing is over.  Madison Gulf is a climbing area that will not appeal to everyone.  The approach and descent, the weather, ice and the mountain itself are all ingredients that make this a very satisfying day for those that come here.

I’ve been into the Gulf many times, via both aspects of approach, the East and the West. For the past four years my preferred approach is from the West via the Valley Way Trail in Randolph.  Not only is this way going to be packed to the col, it’s skiable  and lends itself to summit Adams as a finish to the climbing and subsequent descent.  My last time in via the Great Gulf/Madison Gulf Trails in 2009, took 7 hours just to get to the ice. It was a beautifully epic day that opened my eyes to put away the guide book and approach from another direction, one that made sense to me.  Check out the Post  here.

Milage to the ice, with ether choice is close.  However the time may not be. The Western approach, the Valley Way is  ~4.7. The Eastern, Great Gulf/Madison Gulf trails about ~5.3. The key to the approach for the Great Gulf Trail is a lean snow year or early season.  Alternatively, catching the Valley Way tracked to the col. can happen almost anytime.  To each their own, I’ll not say one is better than the other, it all depends on what you seek.  The Valley Way is faster and can have complete solitude, that is if you leave early enough.  It also has the wonderful terrain of the Madison-Adams col. The beauty of Star Lake and passing the craggy Parapet en-route to the descent could be a destination in itself.  The Great Gulf Trail feels remote after the first bridge. The river sings almost throughout the entire hike and you’ll pass through some of the states most beautiful forest and countryside.

The day after an excellent session of lift service skiing, Doug and I are on the Valley Way Trail.  In a few hours we are at the Madison-Adams col.  The fog and stillness join together to create an eerie, though appealing environment.  Our view of the ice from the Parapet is not available for fog is dropping like a heavy veil over the mountains face.

I kept the descent on the high side, not wanting to get drawn too low. And though the visibility and snow conditions were less then perfect, in little time we came to the northern most route, Point du Pinceau.  A traverse along the base brought us to our destination. The line of Point is the longest on the cliff.  This is the best route to do if one is not rappelling and continuing on by ether traversing off via the Buttress Trail back to the col or upward to the summit of Adams, Point gets you closer to both of these two exits.

The ice is perfect. The large flow was a cascade of movement caught and frozen in a kaleidoscope of colours.  We climbed side by side until a headwall of steeper ice at one third height. Here we climbed through a weakness one at a time.  Above, the ice was like an azure sea with islands of white sand. It flowed upwards,  lapping like the tide  into a green mainland of stunted trees.

The snow through the trees was airy and deep, snowshoes were once again required.  After crossing the Buttress trail which runs from Star Lake down into the Great Gulf, we continued up an unseen mountain looming above. Part way to the summit the snow became firm and the rime iced rocks more exposed.  We stopped in the surreal landscape, packed the snowshoes and took a tea break.  The fog was thick and the wind light and we took the wonderful atmosphere into our souls.

The summit came to us like the face of a wraith out of the fog and after a quick handshake we were off.  The Airline Trail drops off the top and after a half-mile merges with the Gulfside Trail.  We followed this back to the col and flowed like liquid back down the Valley Way.

Reanimating areas and climbs is my passion.  I look at Madison Gulf as a challenging way to summit Mt. Adams.  The unusual weather we had, the constant changing of ice and conditions made this another wonderful experience.  Grades did not matter and without any expectations of what lay before us, this was about experiencing an amazing area and climbing a mountain, pure and simple.

Another great link-up  when the snow is just right is that of King Ravine to Madison Gulf. Here is the link to a post from 2009.  Link

Thanks to all for taking the time to read this. And thank you to Doug for being there.

Photos from the Climb 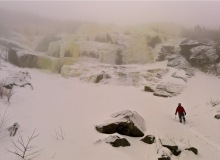 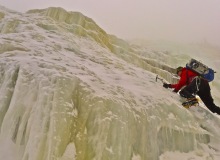 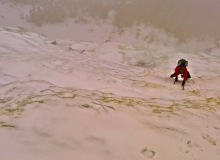 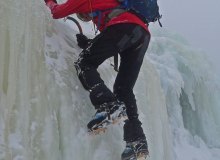 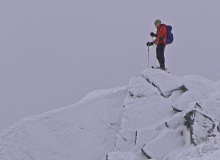 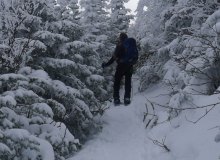 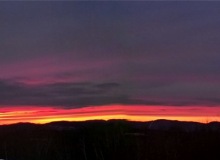 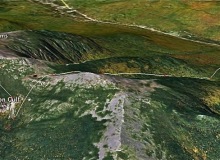 AK Climbing On A Budget – Slideshow 2/23/2013 at IME Behind the Tights: Andrea Charest
Scroll to top